No WSJ today due to the holiday. 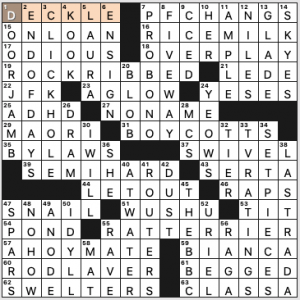 It’s hard to focus on blogging when the hiccups have possessed you. Please send help.

Tough puzzle compared to yesterday’s, but not too hard on the Saturday spectrum.

Is it possible I’ve never encountered this term before? I had to work the crossings for ROCK-RIBBED (19a. [Unwavering]). Just me?

Fave fill includes P.F. CHANG’S, though one might note the inauthenticity of the “Great Wall of Chocolate” dessert in the clue. First off, chocolate isn’t traditionally Chinese (though it’s absolutely a global delight). Second, I Googled it and that is a slice of six-layer cake. It ain’t shaped anything like a wall, much less the Great Wall.

My list of faves got off course there. Also good: RICE MILK (as fill, I don’t wanna drink it), WU SHU, summer SWELTERS, END OF DAYS, and CLICKHOLE. Journalistic LEDE also pleases me.

Not so keen on CLASS A, ANODE, plural SKYES and YEOWS. 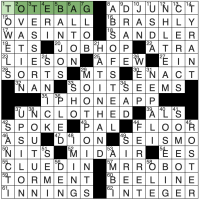 Not too thorny this week; perhaps a puzzle made slightly easier for the holiday? Yeah, I doubt it. I am liking using Xword; the grid image is from there. I will get daring and mess with changing the color scheme someday! I have done a few puzzles by Julian Lim, and I enjoy his work. This one was well made with almost nothing overly obscure, and with a few great phrases as well. 4.4 stars this week. Bravo! 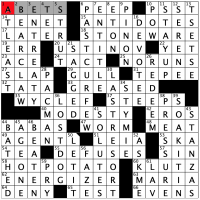 Tough one this week. Lots of good stuff in here, but quite challenging. Once again, the SW corner is where most of my issues were, and I plain didn’t know the crossing at 49A and 50D. If you look closely at the grid image, you will see that is my only error mark. See comments below! Once again, Greg’s puzzles are stellar and enjoyable. Keep them coming! 4.3 stars this week.

THEME: The first six letters of each theme answer are one letter away from the word “COURSE” 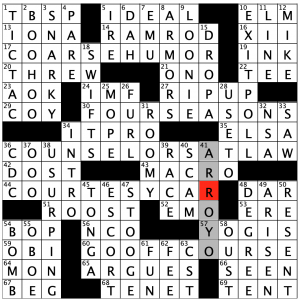 Well this was… strange. Interesting idea with an execution that had me scratching my head. I think the first themer, since it uses the word COARSE, which is a homophone for the COURSE in the revealer really THREW me. Then, we have FOUR SEasons where the “change in course” bridges two words. And COUNSElors where the first letters don’t sound anywhere close to COURSE.

Liked EXIT POLL in the fill. Not a big fan of the partial DROP A abutting the partial USE TO.

Fill was a bit trickier than usual overall. Had no idea ARROYO was an [Often-dry gulch]. I just thought it was a recurring surname of at least two students of mine per year.