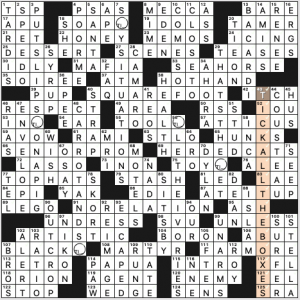 Neat rebus theme. The revealer is 43d. [Be fully qualified … or a hint to this puzzle’s theme], TICK ALL THE BOXES, and {TICK} is in each rebus {BOX}, where the Across answer contains a rebused BOX and the DOWN has TICK. (Annoying that the accepted solution doesn’t take B for the Across BOXes. If you can’t type an actual tick mark in the box, stick with the Across for the rebus!)

Here are the themers:

These are all really good entries unto themselves, and the theme is consistent: each {BOX} term uses that word to mean a storage thing, and each {TICK} is embedded in a longer word with distinct meanings (tree STICK and adhesive STICKY are etymologically related if you go back to Old English).

A few clues that popped out at me, dressing up some short fill:

4.5 stars from me. This whole venture was executed well—when it comes to the rebus, the theme entries’ cripsness, the overall fill and cluing, it ticks all the boxes.

I had a vague idea what was up with the theme before I got to the revealer. It was more of an “oh, that” moment than an “aha!” moment. It’s a perfectly serviceable Sunday theme of the “words that all go with another word” variety. 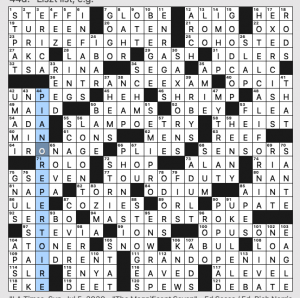 GRAND HOTEL (which I know as a movie: Google tells me it’s also a TV series), GRAND PRIZE, GRAND ENTRANCE, GRAND PIANO, GRAND SLAM, GRAND TOUR, GRANDMASTER. They’re all solid. The theme works and is appropriate for a Sunday. Not a whole lot of fun, but hey, you can’t have everything.

I didn’t go through and count for the crossword Bechdel test. While I was solving the puzzle, it felt like it had a lot of women’s names in it, and some frequently seen clues with female-inflected answers, like [Bygone Russian ruler] for TSARINA and [Part of HMS] for HER. I simultaneously appreciate the representation and resent that it’s still a rare enough phenomenon that I noticed it. Could have had one more by cluing ADA for Lovelace instead of dentists.

What I didn’t know before I did this puzzle: honestly, I’ve never used Lysol so I didn’t know it targeted ODORS. I thought it was just for microbes. 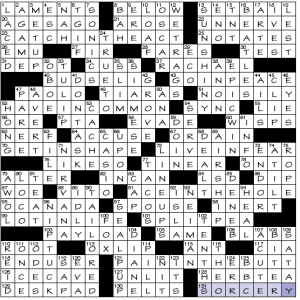 This is one of those easier-to-show-than-describe themes, but here goes. The clues consist of single words containing in sequence—but not necessarily consecutively—smaller words; together these two can be taken to literally represent an “x in (the) y” phrase. They’re similar to some cryptic clues.

Clever theme and really well executed. The quality of these WaPo 21×21s has been consistently good and it’s the puzzle I most look forward to on Sundays.

I didn’t do a formal tally, but the impression I had was that the ratio of women and minorities in clues and answers was pretty good. As that’s a metric we’ve been highlighting here at FiendCo.

This was a beauty of a grid. I didn’t catch onto the theme until the revealer and then I just marveled at the theme answers and the fill.

It’s all about the WNBA (112d, [Hoops org. whose members that don’t end with “s” are at the starred answers’ ends]). ZB excluded teams like the Las Vegas Sparks and the Sacramento Monarchs to focus on teams named with a singular noun. For some reason, these team names seem classier to me. 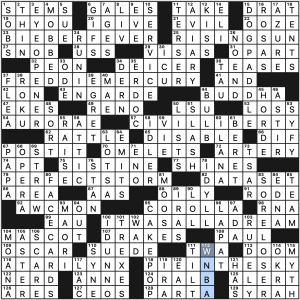 Pretty great set, eh? Even if you didn’t know the ATARI LYNX, everything else is common enough and fun.

And everywhere you look in the grid, it’s the same thing—fun, quality fill: EYE-OPENER, DOG PADDLE, “EN GARDE!,” BUDDHA, SISTINE, COROLLA, FACE CARDS, CAKE POP, and SORE LOSER. And as usual, we get fun colloquial phrases along the way: “OH YOU,” “I GIVE,” “AW, C’MON!,” and “I DUNNO.” Only LAP AT made me go “meh,” and only for a quarter of a second.

Bottom line, this is simply a list theme, but Zhouqin makes it shine with a quality themeset and marvelously sparkly fill. 21x grids can often be a slog, but not this one. 4.25 stars from me.