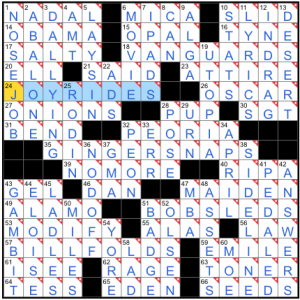 I smiled in anticipation when I saw Lynn’s name on this puzzle, and she did not disappoint. It’s a nearly perfect Monday by my lights: straightforward and accessible enough for early-week solvers and newbies and still amusing for experienced folks.

Each theme answer is a word or phrase clued as if it began with a name.

What I didn’t know before I did this puzzle: that PEORIA is located on the Illinois River. 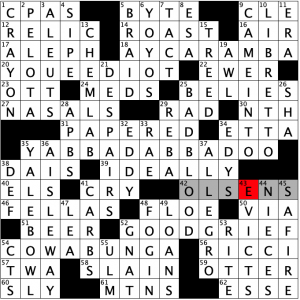 Hello! It’s your friendly neighborhood themeless-loving chick joining the Fiend crew! Irony: my first review for this blog is of a puzzle with a whopping 49 squares across five entries of theme material. Nothing complicated here, as befits a Monday: these are catchphrases of various animated characters. Well, okay, “catchwords,” as noted in the puzzle’s clues, since one theme entry is a single word rather than a phrase.

Fun and evocative — just try to solve the puzzle and not hear Ren saying “You eediot!” in your head. My favorite was COWABUNGA, because I grew up at the right time to have watched a whole lot of TMNT back in the day. The Turtles debuted in 1984, so they are now old enough to run for President of the United States. Yup, I’m old.

As for the non-thematic fill, I had to check twice to see that I was truly solving the Monday, and not a mid-week puzzle at least. PELOTA and SIPE in the NW corner seemed a little extra for Monday, and there were some places where it would be easy to put in an answer that fits whatever crossing(s) one has already and also fits the clue, and still be wrong. (I had REBUTS for BELIES at 25A for a little bit, and EJECTS instead of EVICTS at 43D, for example.) I would’ve made this one a Wednesday.

I enjoyed the theme and found the non-theme fill a bit meh, which works out to 3.5 stars from me. 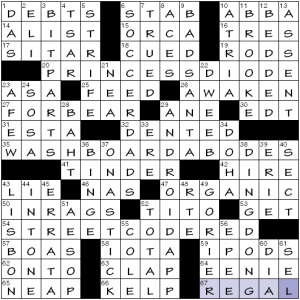 ODEs are introduced to wacky effect, with mixed success.

Can’t discern a reason, but the ODES move progressively one letter forward from the end as we go down the line. Positions: ultimate, penultimate, antepenultimate.

Overall, a solid puzzle with good grid-flow and some challenging fill for an early-week offering. (I forget whether Universals are supposed to increase in difficulty through the week.)

Whoa! *FIVE* 15s!!! This puzzle is a feat of construction, with L/R symmetry backing up the five incredibly solid grid-spanners. The strain on the grid shows in the fill at times, with the whole bottom really taking a beating, but honestly, I’m just impressed that it looks as good as it does! 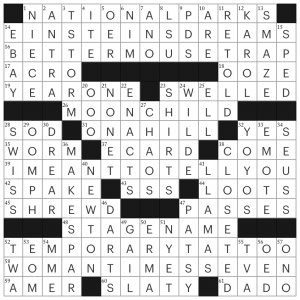 The grid-spanning entries are: EINSTEIN’S DREAMS, BETTER MOUSE TRAP, I MEANT TO TELL YOU, TEMPORARY TATTOO, and WOMAN TIMES SEVEN. I had never heard of the first or last of these, although EINSTEIN’S DREAMS was fully inferable from the clue (WOMAN TIMES SEVEN was less so). I loved the clue on I MEANT TO TELL YOU [“Oh, and another thing…”], and thought [Disappearing ink?] was super clever for TEMPORARY TATTOOS. All around, this is a solid set of 15s to anchor the puzzle.

Other entries I loved include MOONCHILD (I am one!), SMAZE (like smize for the skies!), and STAGE NAME (and the multiple Lizzo references that came along with it).

Overall, this was a hefty, challenging puzzle full of solid long entries and not-so-solid short ones, but on balance I enjoyed solving for those long entries more than I struggled with the short ones. Tons of stars from me!

You’ll find FRIENDS TO THE END [Lifelong companions, and a feature of 17-, 27-, 37- and 45-Across], or more accurately, friends at the end of today’s main theme answers. 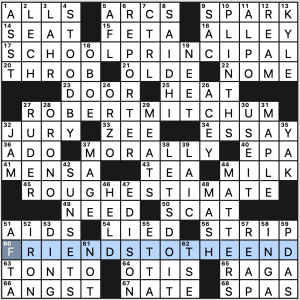 That works. Nothing too fancy, just a straight and clean Monday-level theme. At first though, I completely missed MORALLY as being part of the theme because it’s just a single, shorter, less-interesting word. It would have been nice if something on a par with the others could have been found. But of course, a longer answer in the center would have been exponentially harder to fill around.

Some theme-adjacent (i.e. “friendly”) fill can be found in STOOD BY, “SAID HI,” and “LET’S DO IT.” If you want to take it a step further, you can enjoy romantic SUNSETS.

What would we do without ORONO and NOME? And LAIC, AFTA, ETTA, TSE, ALPO, AFL, and Burt LAHR? Quite a lot of crosswordese in this grid, but 63 theme squares add a lot of constraints.

All in all, this is a straightforward, synonym theme, but I liked finding the “friends” embedded at the ends of each themer. 3.6 stars.