This week, Matt challenges us to find what you’ll get for a correct answer. And, wow, did I find that tough to find! 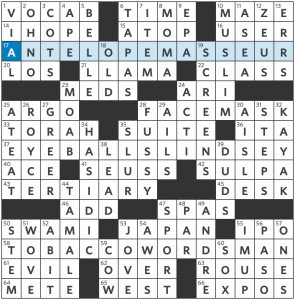 We have three long, funny themers:

I worked on this for a while collaboratively, and yet fruitlessly — we thought maybe the title, “Stress Test,” had something to do with pronunciation (it did) and that there were some odd entries (such as [42a: Island off the coast of Cebu in the Philippines]: SULPA).

Another friend confirmed that yes, the “stress” of the title refers to pronunciation, so I poked around a bit more … hmmm, what if …

… thus: ANSWER ISLAND BACKWARDS — suggesting that the odd entry, the [Island off the coast of Cebu in the Philippines]: SULPA, should be read backwards, giving us A-PLUS, which is what you’ll get for a correct answer.

This one confounded me a bit, since I couldn’t grok (as we say in the business) which parts of the themers were supposed to be stressed in order to produce the new words to lead us to the solution, and they didn’t seem consistent in each entry (i.e. not the same corresponding syllable in each set). Looking at them again now, I see that the syllables that make up the words pointing to the solution are the ones that are stressed in a standard English pronunciation of the words: ANtelope masSEUR, EYEballs LINDsey, toBACco WORDSman. Not my favorite of Matt’s metas, but, hey, I’m usually very much on his wavelength, and you can’t win ’em all.