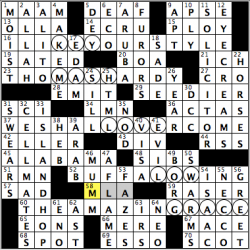 Good day, everyone! Hope all is well with you and, for all of you dog owners, that your pooches are recovering well from all of the fireworks set off this past weekend (and for the past couple of weeks prior to it)!!

Today’s grid passes a new notes around, as the five theme entries are phrases or nouns in which a series of circled letters in each spell out a type of note. Furthermore, those hidden “notes” span multiple words in the theme entries.

Man, this is a puzzle to admire, especially because of the wonderful, lengthy non-themed fill. Where to start? EYE CREAMS (12D: [Olay products for delicate areas]) and SOLICITOR (11D: [___ General (4th-highest ranking official in the Department of Justice]) hold it down in the northeast while the clever clue to CELLMATES (32D: [Folks who share a joint?]) and ISLAND HOP, something I want to do desperately, do the job in the southwest corner (33D: [Visit Oahu, Maui, Molokai and Kauai]). And if the Hawaiian islands don’t do it for you, maybe you’d rather head to ARUBA instead (7D: [Island off Venezuela]). Though the intersection of MLA (58A: [Org. with a style manual]) and MUMM might have been a tricky one, I’m sure the largely erudite crowd that gathers here daily — some possibly being champagne connoisseurs to boot  — wouldn’t have had too much of an issue with it (46D: [Maker of “Cordon Rouge” champagne]).

“Sports will make you smarter” moment of the day: DEAF (5A: [Like Beethoven, at the premiere of his Ninth Symphony]) – There are a number of deaf athletes who have made lasting impacts in the sports they played, with the most successful and well-known of the group probably being former 19th century professional baseball star Dummy Hoy.  Hoy, whose given first name was William but was reported to have preferred being called “Dummy” in relation to his disability, ended his pro baseball career with 2,048 hits, 596 stolen bases and a .288 batting average, and was baseball’s all-time leader in career putouts and second in total games played in the outfield at the time of his retirement in 1902. Hoy is enshrined in the Cincinnati Reds Hall of Fame, and before Game 3 of the 1961 World Series between the Reds and New York Yankees, the 99-year-old Hoy threw out the ceremonial first pitch. In this person’s opinion, Hoy should also be enshrined in the Baseball Hall of Fame in Cooperstown!! (He’s not at the moment, though not for a lack of trying from many supporters and historians.) 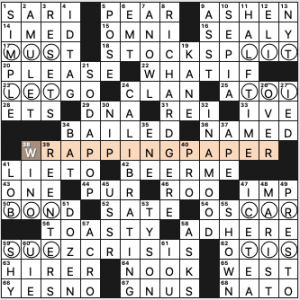 Cool theme, and surprisingly twisty/oblique for a Tuesday puzzle. It’s easy enough to wrangle the revealer: 38a. [Holiday purchase … or a hint to the circled letters], WRAPPING PAPER. But less straightforward to understand what’s happening with the circled letters. MUS LIT, LET TOI, BON CAR, SUE TIS?? Instead of starting at the left, start with each right-side trio and then wrap around (as if the puzzle were rolled into a cylinder) to finish each type of paper with the 3 letters at the left. LITMUS, TOILET, CARBON, and TISSUE paper. I use exactly two of these. I wonder if you can still buy carbon paper in bricks & mortar stores, or if you need to order it online.

There’s one crossing that has a strikingly mid-20th-century vibe: the SUEZ CRISIS meets the USSR. The Beatles clue for PLEASE is also in that timeframe.

INNER MONOLOGUE [Narrator in your head, and a feature of 20-, 25- and 45-Across] describes this unlikely hidden-word theme. I say “unlikely” because two of the three hidden words are seven letters long! 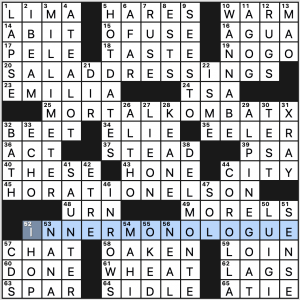 Very nice finds these are. I can’t imagine looking for—and then actually finding—a single seven-letter hidden word, let alone two of them which are synonymous with each other. Impressive.

In the fill, I wouldn’t know an ALPINE GOAT from any other kind, but it makes for fun fill, and MILLIMETER isn’t that sparkly in and of itself, but the clue provides an interesting factoid [Thickness of a credit card, roughly]. WANNABE, HOT DATES, SAUNTER and DEL MONTE also make it into my fun column. On the “meh” side we find ESTS, ELIE, A TIE, IS ME, ETRE, and OKED [Greenlighted]. I can’t picture anyone ever writing that word in any way other than “okayed.”

I didn’t take note of any particular clue, so I will leave things there. I was impressed by this hidden-word theme, and the long fill was nice enough to outweigh the kludgier stuff. 3.75 stars.

I so very badly wish that Hillary Clinton could’ve been included in this puzzle.

THEME: World Leaders who are Women. 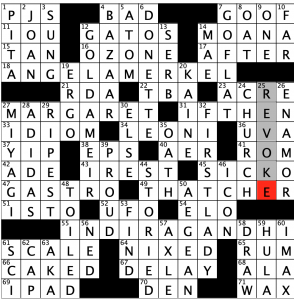 I’m just reading the entire clue for FIRST LADY now, so it makes more sense as a revealer to me. During the solve, I thought it odd that it was among names of women who were the leaders of the country, but now a little AHA moment… still not sure if it sits right.

An enjoyable solve for sure. No crosses needed for any of the themers. I liked DONETTE and IF THEN in the fill- coulda done without I REST and GO FLAT (that one feels forced to me as a phrase).

Feels like an entire decade has gone by since Universal published an entire month’s worth of puzzles constructed by women. Hard to believe it wasn’t that long ago. 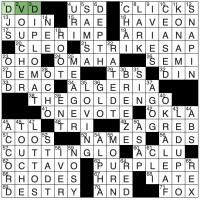 I have a bit of a sweet tooth, so this puzzle hits home!

The original phrases were super-impose, strikes a pose, the golden goose, cutting loose, and purple prose. Take the -OSE off (like all sugars!) and you have the hilarity seen above. Nicely done. And only 4 away from 1,000! 4.3 stars for this one. 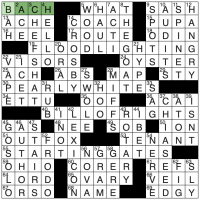 We have a standard LAT revealer at 55A, and yes, I had no idea what was going on until I got that far!

As in flood gates, pearly gates, and of course Bill Gates, who is in the news a lot recently, especially if you’re a conspiracy theorist! Again, it took me a minute to get what was happening, but that is all on me. Great puzzle, Evan! 4.4 stars.