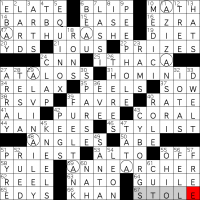 hello and welcome to episode #631 of matt gaffney’s weekly crossword contest, “Women’s Firsts”. for this week 1 puzzle, the instructions tell us that the answer is a First Lady of the United States. (i typically try to do week 1 without looking at the instructions, but i accidentally saw them this week as i was opening the email.) what are the theme answers? four long proper names are arranged in a pinwheel pattern in the grid:

these people all have initials a.a., so our mystery first lady must be abigail adams. (in case you’re wondering, john quincy adams’s first lady was named louisa. until quite recently, she was the only foreign-born first lady.) by some coincidence, i solved this crossword right after watching 1776 (a fourth of july tradition in our family, although this year it was supplemented by first watching hamilton—two musicals with a very different take on john adams), in which abigail adams is one of two female speaking characters. (and no, they don’t speak to each other, so it fails the bechdel test.)

so, this is certainly an easy enough meta for a week 1. i’m a little surprised the puzzle wasn’t called “ladies first”—seems like a more natural thing to title a puzzle about first ladies and the letter A. it’s also a little curious that three of the four theme answers were men; on the other hand, certainly the most famous A.A.-initialed woman i can think of other than abigail adams herself is amy adams, who would not be a good choice as a theme answer as it would dupe the adams part of the meta answer. so i guess it’s fine. i also had the vague memory that we’ve seen a week 1-ish abigail adams meta before from matt, but my searches didn’t turn anything up, so perhaps i’m misremembering. at any rate, over 631 weeks it’s hard to remember everything you’ve already done!

a couple quick notes from the puzzle: