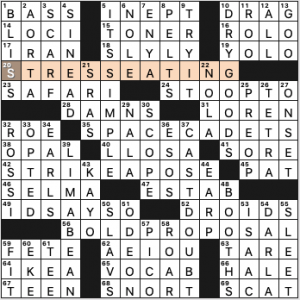 I liked this puzzle! The clues are styled or punctuated to playfully suggest the theme entries:

Cute. Even though the clues I saw only offered me one “!” and the spacing to make the theme really add up.

I liked the fill overall. “I’D SAY SO” and CAST DOUBT were my fave non-theme entries, and the rest was generally smooth. (Plural abbrevs like SRAS, I could do without. TARE and ODEON are boring.) On the “modified Bechdel test” front, this puzzle comes out on the positive side.

I’m going to apologize up front because I need to keep this short, as I’m traveling today and don’t have much time.

The theme is GAS BUBBLES (31d, [What the circles represent, given the words they hold]). 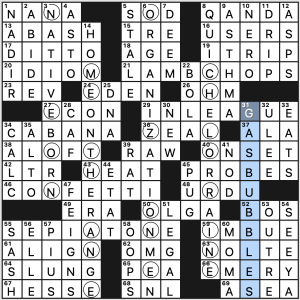 I enjoyed this theme even with the outdated ORGANIZATION MEN.

Ok, so, this is what I’m talking about. Erik has made a beautifully designed grid, with entries and clues packed full of people I did not know, not a one of whom is a white man (!), that I still solved with relative ease, because every. single. crossing. is fair! The fact that the cluing is also playful and self-referential is just icing on this delicious, layered crossword cake. [Sidenote: is crossword cake a thing? My birthday is in two weeks so let’s get on that] 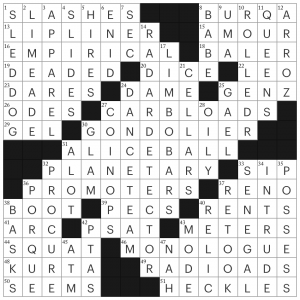 I love this rotational staircase pattern, which is both a pretty visual and a good showcase for when you want to use lots of middle-length entries, rather than one or two long marquees. The whole central section of this puzzle is crammed with fully excellent mid-length entries, including: GONDOLIER / ALICE BALL / PLANETARY / PROMOTERS / LIMBO BARS / DANCE TEAM / CARB LOADS / RADAR DETECTOR (ok that one is pretty long). My only question here is whether the term is CARB LOADS or CARBO LOADS. I’ve always used the latter, but google tells me they’re about equally common.

Another thing I love about this puzzle is that it treats make up and cosmetics, an industry worth over 93 billion dollars, as worthy of inclusion in puzzles. I know we occasionally see ESTEE Lauder in puzzles, but that’s likely due to the conveniently vocalic first name. I’ve never seen a mainstream puzzle treat LIP LINER (0 NYT appearances) with equal validity to, for instance, the parallel entry RADIO AD (4 NYT appearance), or GLAM clued as [Soft ___ (makeup trend)] instead of an allusion to GLAM Rock. It’s not ostentatious, but it’s definitely intentional, and I appreciate it. Similarly, BURQA and KURTA, in nearly parallel positions, have never been used in the NYT either (and KURTA seems not to have been used in *any* mainstream puzzle). Finally, we have some non-western cuisines featured prominently, including ARROZ caldo [___ caldo (Filipino rice dish)] and LIMEADE [Another name for the Guyanese beverage swank]. And again, LIMEADE could have been clued any old way, but it was clued to highlight a Guyanese beverage that most New Yorker solvers probably didn’t know before, and I think that is rad.

Overall, all the stars from me. This puzzle was exciting and beautiful and inclusive and educational. Erik Agard, killing the game as usual ? 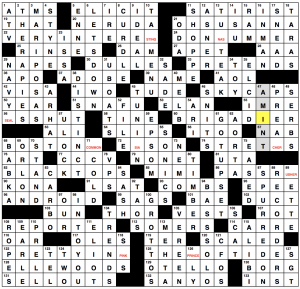 It’s Christmas in July this week at the AVCX, with a 21×21 supersize grid from Elizabeth Gorski, who typically writes a holiday puzzle closer to the end of the year.

“Celebrity Crush” is a great title for this, with multiple mononyms getting packed into various corners of the fill:

Another mononymic singer appearing in the puzzle, but not as a theme square: SADE 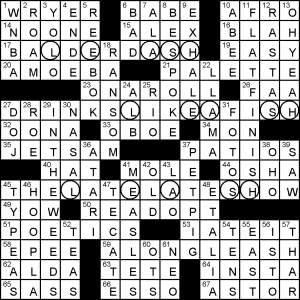 As a general entry, I’d prefer LONGLEASH to ALONGLEASH, but as a revealer I think it works well. Each of three entries spell out LEASH in circled entries. With five letters to cram in, that requires them to be quite long. 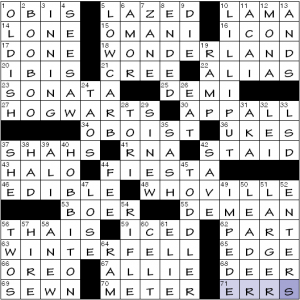