FORK (71a, [What the letters added to the four “stirred” words in this puzzle spell]) is the revealer, but I wasn’t sure what it was getting at at first. It took a few moments, but then I realized what was going on. The theme answers are all two-word phrases whose second words comprise the letters of the first word plus the added letter all “stirred” together (i.e. anagrammed). 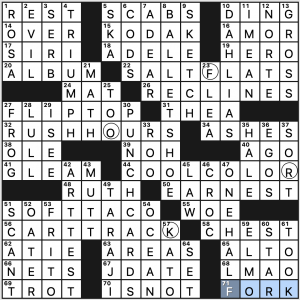 I wasn’t sure about the significance of FORK, though. You can stir with one, though you usually do that with a spoon. I’ve settled on the phrase “stick a fork in it,” even though it’s not alluded to anywhere in the grid or clues. 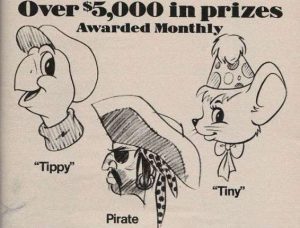 Lots of fun fill: BALLET SHOE, PUNCH CARDS, DAHLIAS, TRIUMPH, FLIP-TOP, SOFT TACO and TARAJI P. Henson of a lot of things including Empire, Hidden Figures, and Person of Interest. Oh, and ART TEST which makes me think of those old Tippy the Turtle drawing tests you’d find in old magazines and newspapers. Apparently, Art Instruction School shut down three years ago after 103 years in operation.

Overall, I liked this interesting theme. It was elusive at first but provided a nice aha moment. 3.9 stars. Stick a FORK in me, I’m done.

You needed to fill in all of the squares to get credit for solving this Thursday’s NYT on the app, but technically, you could have left the special squares in the grid blank: 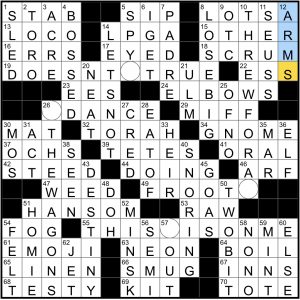 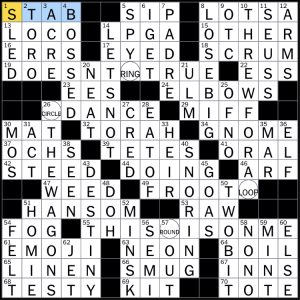 There’s a nice bit of mental subversion here, with the circled squares used to represent words that mean “circle”, whether that’s actually CIRCLE (as in CIRCLE DANCE and CIRCLE THE WAGONS), RING (DOESN’T RING TRUE, SPY RING), LOOP (FROOT LOOP, THREW FOR A LOOP), or ROUND (THIS ROUND IS ON ME, ROUND OUT).  It’s also nice to mentally see the clue “Hora, for one”, absentmindedly think “that’s a circle dance, but that won’t fit in the…wait a second…” and crack the theme.

I was surprised to look at the timer when I finished. It felt longer than 6:16. Puzzles always feel harder when I can’t get an immediate foothold in the NW. The longest answers in this grid are 8 letters, so it’s not at all wide open.

When I looked over it to find entries to comment on, I realized the top and bottom rows are anagrams: IN TEARS and TIN EARS matched with ABDOMEN and BAD OMEN. That was a fun AHA moment ( ___ moment as the clue for AHA was also fun). 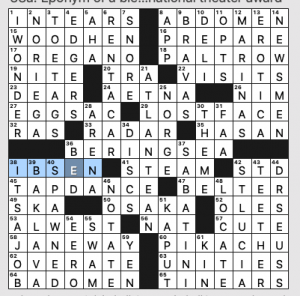 What I didn’t know before I did this puzzle: that the WOODHEN is called a weka in New Zealand, that Gwyneth PALTROW is a foodie (and I don’t care) or that PIKACHU was Japan’s mascot for the 2014 World Cup. I’ve also never heard of HASAN Minhaj. 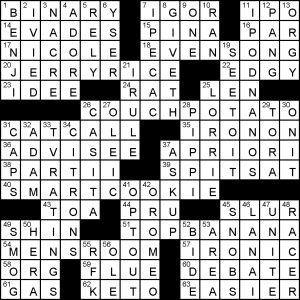 This is an unusually wide open grid. Barring the four helper squares (preferred LA Times terminology for the black squares that do not make new words), it would be a fairly typical grid. Despite this, there is a typical four part theme going on, explained at KETO: [Diet that involves eating fat, cutting carbs, and avoiding the ends of the answers to the starred clues]. The use of “and” seems to imply that avoiding the ends of the answers is independent of “cutting carbs”, but, broadly, that’s what each of those four foods are: RICE and POTATO are starchy vegetables sensu late; COOKIE is a processed food usually made with a flour source (starch) and simple sugars; and a BANANA is a fruit rich in simple sugars.

A good touch that might be missed, but is the sign of careful, considered construction is how each of the things is not a food, per se. COUCHPOTATO, SMARTCOOKIE and TOPBANANA are all terms used to describe people and JERRYRICE is an actual person (who could, one assumes be eaten.)

As mentioned initially, this is a very wide open grid, which, coupled with the thematic constraints makes for a difficult grid to fill. For the most part, some of the medium entries still manage to be more than functional: OROMEO, TVRATINGS, CATCALL, IPECAC as examples. There are a few things like PARTII and SPITSAT that could be labelled as filling contrivances, but nothing egregious.