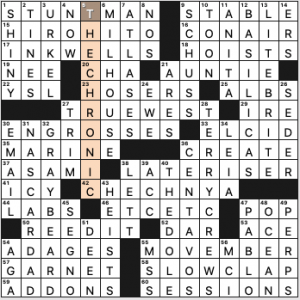 Lots of pop culture peppering this grid. Sam Shepard’s play TRUE WEST crossing MILHOUSE from The Simpsons and Dr. Dre’s THE CHRONIC. CON AIR the movie rather than Conair blow dryers. Peanuts TOONs Linus and Lucy, ANITA from West Side Story. URKEL from Family Matters. ARES clued as [Mission name in “The Martian”] (I didn’t remember that). TERRY CREWS of Brooklyn Nine-Nine beside General LEIA Organa. And Paula DEEN? Eww, no thank you on that last one. Anyway, pop culture’s in my wheelhouse, and these helped me go faster than usual on a Friday NYT.

There were a smattering of clunky entries along the way, like AGA, MCI, LETT, ALBS, REEDIT, YSL, and AS AM I. Some of those are pretty hardcore crosswordese, if you ask me.

Other zippy entries includes mustache MOVEMBER (men growing mustaches in November to raise awareness of prostate and testicular cancers as well as suicide prevention), SLOW CLAP, NASCAR DAD, and LITE BRITE (which I seriously contemplated buying last year; now available in modern flat-screen!). Not as keen on GRAYBEARD ([Wise elder]), since none of the wise elders in my family can grow a beard.

I think I’d have preferred a little less of the sparkle in the grid if it would facilitate clearing out the clunkers. 3.4 stars from me.

I figured out the theme from the blurb in the EMail – “touches on a movement important to all of us.” I figured it had to be Black Lives Matter, and it was. I enjoyed the way she worked it in. We have three grid-spanning theme answers that end in the relevant words. 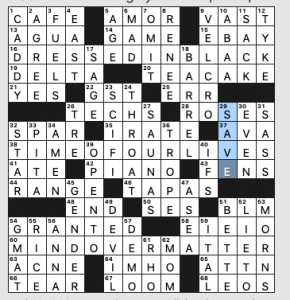 And the revealer, for those who didn’t see what was going on: 51a [Initialism for a racial justice movement, and this puzzle’s theme]: BLM. I smiled at the front page of the NYT today for the first time in months, because of this picture. 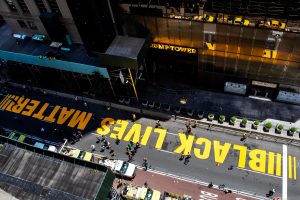 What I didn’t know before I did this puzzle: the name of the Ne-Yo/Pitbull album; that there was a character called TEACAKE in “Their Eyes Were Watching God;” that W.E.B. Dubois wrote SCI–FI. 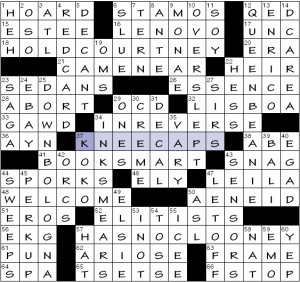 Moderately entertaining theme. Not convinced it’s remarkable enough to justify a deviation from the standard 15×15 grid to 16×15, but here we are.

Fun fact: there are apparently no worthwhile remixes of Monty Python’s The Knights who Say ‘Ni!’ available, ergo no music video to cap things off today. 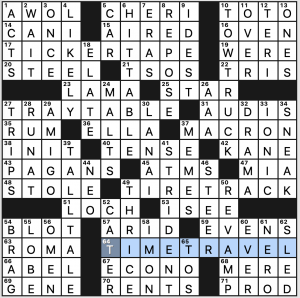 Solid, if straightforward theme. The hardest part, since it started off with a tricky question mark clue, was realizing there wasn’t actually any wordplay going on in the theme entries. But these comprise a nice themeset.

With six themers, there isn’t much room for sparkly fill, but I do like STRIDENT, THRICE, MACRON, and REVAMP.

Hellooooo it is Friday! Congratulations team, we can cross another week off our perpetual covid purgatory calendar. And we can solve this puzzle from Anna Shechtman, which had some excellent long marquees and medium-long entries mixed with a rather frustrating amount of short fill! Quick writeup today as I’m running behind on life. 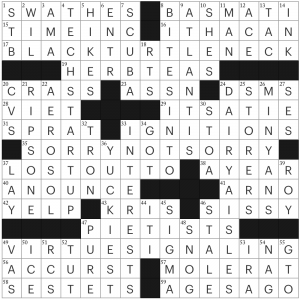 I went for 17A first, and immediately filled in TURTLENECK..??? SHIRT?? without even looking at the crosses. And then I looked at the crosses, and just as quickly managed to replace it with BLACK TURTLENECK, which was correct. I imagine some people who are less ~online~ may have managed to avoid the burden of learning who Elizabeth Holmes is, but even the luddites among us probably know about Steve Jobs and his trademark BLACK TURTLENECK. This is a fun, easy long entry appropriate for Friday’s lightly challenging puzzle. The other long across is VIRTUE SIGNALING, which is my specialty, as I publicly and ostentatiously track the representation of gender and race in this crossword puzzle. SORRY NOT SORRY! (Also a great entry).

Some other solid medium-long length entries here include AEROSOL, TECH STARTUP, DAIRY AISLES, MOLE RAT, AGES AGO, BASMATI, YUCKIEST, and RIPS ONE (which I lol’d at, child that I am). The cluing is also excellent; I particularly enjoyed [It might be hatched in an incubator?] for TECH STARTUP, [Gives up on, as a Tootsie Pop] for BITES INTO, and [Places to put all your eggs in one basket?] for DAIRY AISLES. Good stuff!

Overall, a solid, lightly challenging Friday puzzle! I enjoyed it a lot. Plenty of stars from me, SORRY NOT SORRY.