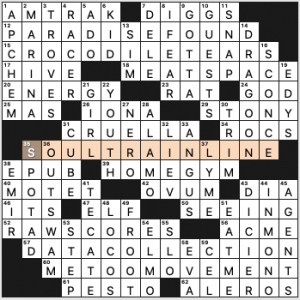 Am I just on Kameron’s wavelength or was this Saturday puzzle actually easier than Friday’s?

In the Fiend comments a week or two ago, Kameron wrote cogently about the importance of various sorts of representation in crosswords, not just women vs men. Today’s “hey, nice representation” roster includes Taye DIGGS, cartoon CRUELLA, the SOUL TRAIN LINE, Tarana Burke and the ME TOO MOVEMENT, and the EMIR Tamerlane. They’re up against really just emperor NERO and LIEV Schreiber. ELMO‘s clue cites Mr. Noodle, and my primary Sesame Street Noodle was “Mr. Noodle’s brother, Mr. Noodle,” as played by Michael Jeter, a gifted silent actor and a gay man. 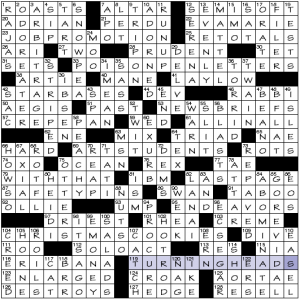 Didn’t catch on to the theme mechanism until about halfway through, but (a) I hadn’t read the title, and (b) I was multitasking, which is to say I was simultaneously doing a number of things in a subpar manner.

What’s going on is that the first word of each theme clue needs to be read in reverse order for it to make sense.

Seeming to complement the theme is 82a [Twist place, perhaps] LAST PAGE. And maybe 51a [Interest for nostalgists] PAST, as nostalgia literally means ‘the pain of returning (home)’.

Let’s take a quick spin through the rest of the fill. 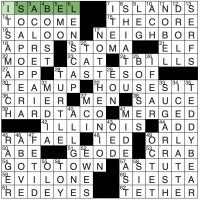 I sailed through most of this, but I got hung up a bit in the SW corner of the grid. Not sure why. Also, I don’t believe I am familiar at all with this byline today, so that may partially explain it! If I have done a puzzle by John-Clark, it must have been a while ago. Great puzzle; this seemed fun, even with the thorny episode at the end. But definitely a slightly different wavelength for me, but that’s OK! 4.3 stars.

That is all! I have to get ready for the NPL online convention today! 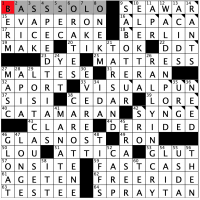 Stumped today. I nearly was banging my head against the wall! The main problem area was the upper right, or NE corner of the grid. You can plainly see all of the error marks! The remaining 75% of the grid was hard, yet gettable, and may have even garnered some smiles. It took me waaaay too long to get 16A, which I think mainly contributed to a lot of the woes in that area. What also contributed to those woes? Stuff I plain just DIDN’T KNOW! This puzzle lived up to the Stumper experience, that’s for sure, and the completion feeling was quite satisfying (after nearly 30 minutes!). Brad and Matt: bravo on a really challenging test. 4.6 stars.

Anyone remember Opera Man from Saturday Night Live? I recently re-watched some of those Adam Sandler appearances. I loved them at the time, but now… yeesh. Cringe! 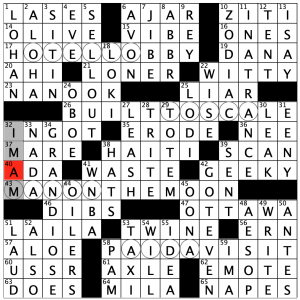 I will admit that I cringed when I opened up the puzzle and saw circled squares: I frequently gripe that Universal’s widely published grids in newspapers and online refuse to adapt to the common practice of circling squares for… well, I have no clue why. But I don’t think this one would suffer all that much from squares going uncircled. Actually, I might have enjoyed the challenge of uncovering the opera titles myself sans circles even more! Nonetheless, I’m not going to gripe about it with respect to this grid.

This is very well done! All of the phrases are extremely familiar, the operas well-known (MANON may be a new title for some), and they are all well-hidden in each of the phrases. In “hidden word” themes, I think it’s crucial to nail all three of those standards, and this certainly does. Good fill to boot! IN A TRANCE, GOT EVEN, and SELLOUT were all very nice.

Can anyone help me with a mnemonic to help remember the difference between AXLE and AXEL? I always stumble there! Also, while I know NANOOK of the North is considered a classic, has anyone made it all the way through an entire viewing of it? I tried. Failed.

4 stars today! With or without circles.