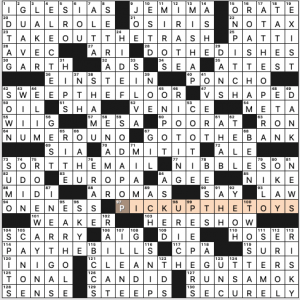 The Sunday puzzle thinks we’re slacking off, because this one’s called “Chores Galore” and last week’s was “To-Do List.” You’re not the boss of me!

Sam’s theme assigns a chore to a specific job based on a different angle of a key word:

The theme’s fairly solid, and I liked it but didn’t love it.

3.6 stars from me. Enjoy the rest of the weekend!

I really want to meet Captain Obvious. Not sure I could stomach a whole meal with him, though. I’d go insane I think.

THEME: Captain Obvious and food. That is, colloquial phrases with food items in them are taken literally. 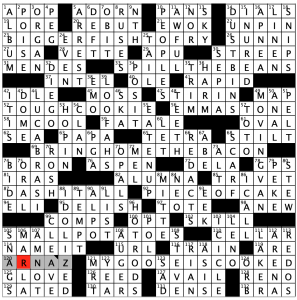 I’m a sucker for the Captain Obvious series, and I know I’m not the only one. And Evan smartly spaces them apart- one maybe two in a year- so that the conceit doesn’t tire itself out and his audience is kept in anticipation. Actually, I think I noted in a recent write-up that we were due for a Captain Obvious puzzle soon, and this one did not disappoint. 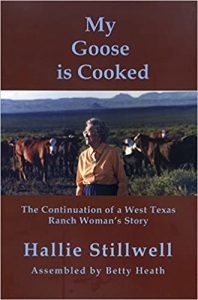 This looks like an interesting read. Available on Amazon!

I knew a lot of the “gists” of the theme answers without crosses, but got hung up on the occasional word. For instance, I knew GOOSE / COOKED instantly but wasn’t sure about the MY / IS part. Hangups like that only made it more enjoyable.

In the fill, I got hung up on the occasional name: can’t believe I forgot MENDES even though I loved 1917. RJ MITTE was new as a name to me, even though I devoured Breaking Bad. Didn’t know MARLA Sokoloff. And I know I should know the name LUCA BRASI, but I don’t (that little section down by BRASI was the last area I filled).

I was very confident that it was ARNEZ and not ARNAZ and CLEEVE looked just fine to me, so I have to claim a DNF since I couldn’t find my mistake when the Happy Pencil didn’t make an appearance.

Is LOOFAHS always spelled with an H? Or is that optional?

I’m missing something about this theme, but hopefully I’ll figure it out by the end of this write-up.

THEME: Not entirely sure, but there is G?N beginning each of the themers where ? goes through the cycle of vowels. 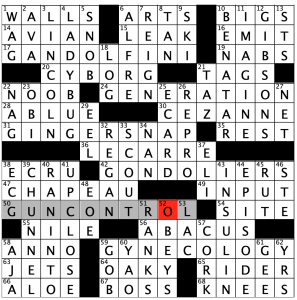 As noted, I’m not confident about the theme here. Alphabetic Sextet implies a set of six something. Okay, so there are six total theme answers. Is that the sextet? Or is there something six-ish in each of the answers themselves?

I think it’s the set as a whole. They’re very much in alphabetical order, separated only by that second letter, the changing vowel. So I suppose if they were all in a dictionary, they’d pretty much be back-to-back in a sense.

Oddly enough, I kind of enjoy a head scratcher now and again. I’m still only 60% confident that I explained the theme, but I didn’t hate it. Anyone else have an observation or something I missed?

Our theme is three-word phrases whose initial letters are found consecutively in the alphabet. 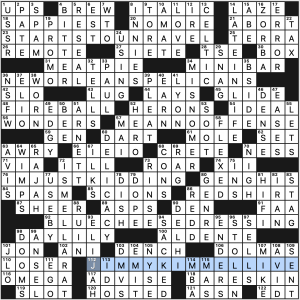 I thought this was a pretty nifty theme. There can’t be too many well-known phrases that have this feature, so I’m impressed by this well-chosen set.

Fun fill: I love a good MEAT PIE, I avoid the expensive MINI-BAR, I occasionally throw a FIREBALL (playing as Mario), and I cook my pasta AL DENTE. Other goodies: GENGHIS, DAY LILY, BARE SKIN, LATE IN LIFE, I SMELL A RAT, DELICACY, and MISNOMER. Good stuff. 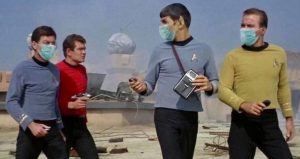 Pro Tip: Do not go on an away mission if you’re a REDSHIRT.

I also like REDSHIRT [College athlete whose eligibility is extended], but we also would have accepted the clue [Star Trek away team member most likely to eat it].

My only hiccup was with the clue [Counsel], which I took to be a noun and so inputted ADVICE. Nope, it’s a verb, and so the puzzle wanted ADVISE. That cost me 50 seconds at the end.

This was fun! All the theme answers have ER added to the end. Wackiness results. 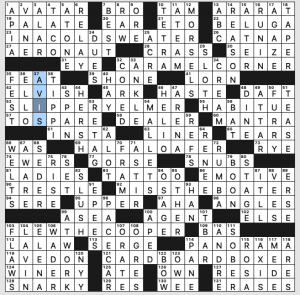 The theme is solid and well-executed – my only quibble is with a clue, not an entry. It’s Sunday-smooth and enjoyable. Nothing about the fill made me wince while I was solving. Nice!

What I didn’t know before I did this puzzle: that Quenya and Sindarin are forms of ELVISH. I presume this is LOTR lore. I’ve tried to read the books. Never made it through. I also did not know that GORSE is also called furze. “Furze” looks like a word Dr. Seuss made up.