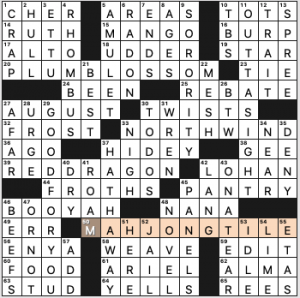 It’s Amy filling in for the vacationing Jenni, and happy to see Erik’s byline awaiting me. I knew where the theme was heading after the first two themers, but didn’t know the names of all the various suits and tiles. There’s also a lot of variation in what’s included, depending on the country.

I’ve never played mahjong, but my in-laws picked up a set of tiles a few years ago and there’ve been some games played when we’re visiting. Who knows when it will be safe to visit them again? I am familiar with most of the tiles from one of those solitaire mahjong games on my iPad, try to clear the board by matching the tile pairs, emptying out your mind along the way.

Representation matters: CHER, RUTH Bader Ginsburg, TWISTS and WEAVE both with [Hairstyle option] clues that apply to Black hair, Lindsay LOHAN, ENYA, filmmaker Dee REES, [Alpha Kappa Alpha, for one] as a Black SORORITY, Anne HATHAWAY (I wonder if Erik originally clued this name via singers Donnie or Lalah) are all out here representing women and/or people of color. The closest thing to spotlighting a white man in this puzzle is, I think, a Dashiell Hammett book included in the NOVEL clue. And the theme has an Asian focus. Refreshing! 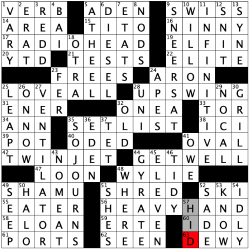 I vaguely remember a clue from I wish I knew what crossword, in which the word SET was clued as something like “word that has a page and a half of definitions in the OED.” Although my memory is imperfect, you get the idea: There are as many kinds of SETs as you can imagine, and Paul Coulter took advantage of that to generate a SET LIST (35A), clued as “Itemized concert songs in playing order…and what all the words in answers to starred clues comprise”. That is, in the six starred clues, the answers consist of two words that can each be placed before SET to make a new compound word or phrase, like HEADSET or HEAVYSET.

Some of these SET pairings work better than others. WELL SET feels a little contrived, and LOVE SET, just as LOVE ALL, uses LOVE in a very specific tennis sense. (Today I learned that a LOVE SET is one in which the winning player doesn’t lose any games.) On the other hand, going from UPSWING to UPSET and SWING SET feels like a fun twist.

I also didn’t love that 11D and 27D are both longer than any theme entries, which is why the theme entries are starred (to help you pick them out in a crowd). 27D, VENTILATOR, feels particularly ill-timed, although that’s not the constructor’s fault. 2.5 stars from me.

Somehow it is the middle week of July! Here’s a puzzle from Patrick Berry to kick it off. It’s packed with medium-length entries of variable interesting-ness, a few clues I loved, and a corner that took me about as long as the rest of the puzzle combined. Let’s dig in, in all bullet points! 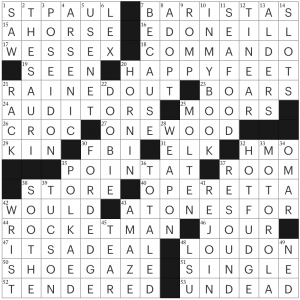 And on that last point, this is the sort of “no-culture” puzzle that Kam mentioned and that I’ve promised to point out when it appears. Patrick Berry is a master puzzlemaker, and this puzzle, like so many others he has made, seems on its surface to be this sort of “platonic ideal” of a crossword: all solid entries, no cringeworthy fill, some interesting trivia/exciting wordplay in the clues. BUT if you scrutinize it a little more deeply, you notice that it does, in fact, have a cultural viewpoint, and that viewpoint is a masculine white middle class culture (Arnold Schwarzenegger movies, golf, baseball). Not going to belabor the point, but it does bear noting.

A good amount of stars from me for the solid construction, but I wish there were more new and interesting things in this puzzle. See you on Wednesday folks! 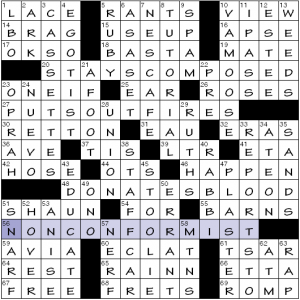 The puzzle was very late in posting today, so this’ll be a quick re-cap.

53a is clued [Make a start, and what you might do to the ends of the starred answers] and is answered with GET CRACKING. The other theme answers end with things that might get cracked. 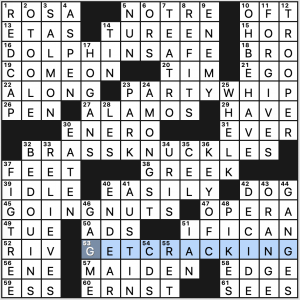 In each case, the meaning of the word changes from the given phrase (although “knuckles” is pretty close to its original meaning). The last one, however, doesn’t feel as “in the language” as the others. Is it supposed to be “crack some nuts” or “crack a nut” or just “crack nuts”? Obviously a nutcracker is a thing, but I don’t think I’ve ever heard anyone say, “I’m going to go crack some nuts.”