Title: “Jazz Combos”
Prompt: The meta for this puzzle is a category describing some jazz performances.
Answer: DUETS 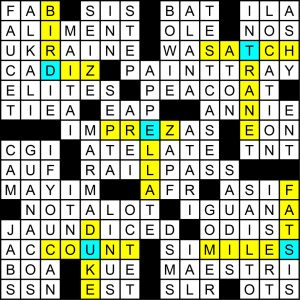 So let’s look first at my answer, which was certainly found only by me since it requires a hilarious goof to arrive at, and then at the constructor’s intended answer, which was presumably found by all of the 200+ solvers who are on the leaderboard.

I found the following five jazz names hiding in the grid: SATCH (in WASATCH), ELLA (in APPELLATE), MILES (in SIMILES), DUKE (in MARMADUKE), and DIZ (in CADIZ). I took the last names of those five performers, which are, in clockwise order from the center out: Fitzgerald, Armstrong, Davis, Ellington, and Dean. And the first letters of those spell FADED, which I thought might be a common adjective for an old recording (or well-used LP) of a jazz song. I got an extra click from noting that these five letters are also musical notes, which, as the infamous last words of rabbit hole-chasing meta-solvers everywhere go, “can’t be a coincidence.”

Well it can and it was, especially since your brain has to accidentally swap baseball star Dizzy Dean in for jazz great Dizzy Gillespie to get one of the D’s in FADED. D’oh!

Back in the real world, ten jazz nicknames were hiding in the grid, as highlighted in yellow above. BIRD (Charlie Parker), DIZ(zy Gillespie), SATCH (Louis Armstrong), John Col(TRANE), FATS Waller, MILES Davis, DUKE Ellington, COUNT Basie, ELLA Fitzgerald, and I had to look PREZ up but it’s Lester Young whose name is new to me. The five intersections formed by those ten names spell DUETS.

Well I descended into madness rather quickly on that one, so I”ll defer to the rest of you on ratings and comments. Rabbit holes sure are rabbity sometimes and I found me a beauty.