Our answer this week is a five-letter noun. 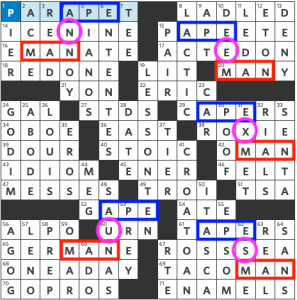 No real standout themers in the grid — and I was pretty stumped until I asked for a nudge. It was suggested that I “take the title literally, and look for repeated strings” — and that was enough to find what we were looking for.

Repeated strings were, in keeping with the puzzle’s title, APE and MAN — and, they were connected by a letter — a link, if you will, though it’s not really missing per se. The letters connecting APE and MAN spell out NEXUS, which is a five-letter noun and our answer. One meaning of nexus is a “connection or causal link,” so it’s appropriate!

Not much else to say … shh, I’m actually on vacation and kinda phoning it in. This’ll have to do. Back atcha next week when my teen son and tween daughter aren’t asking me when I’m getting off the computer to go do something fun.