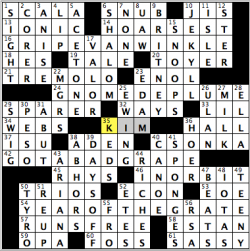 Hello everybody! Hope all is well with you and, especially to those people living in the Sun Belt and the northwest portion of the United States, hope you’re all staying as safe as possible with COVID-19 raging in those areas at the moment.

Today’s grid reimagines well-known phrases or nouns by taking one of the words in the phrase and adding a letter “G” at the beginning and an “E” at the end to create a new word and a punny new meaning.

A somewhat unconventional grid structure (those L-shaped black squares in northeast and southwest) with two 14-letter theme entries, though that allowed for a couple of nice non-themed entries such as RUNS FREE (57A: [Goes off-leash]) and IN ORBIT, with the latter having a pretty nice misleading clue (46A: [Revolutionary?]). The grid gives some love to some wonderful vocalists in BRITNEY (9D: [“Toxic” singer Spears]) and ARIANA (43D” [Thank U, Next” singer Grande]). Seeing SPONGES clued the way it was fascinated me that the word can be used in a positive connotation, as in absorbing knowledge, and in a negative way like the clue in the puzzle (41D: [Moochers]). I was/am unfamiliar with FOSS and hoping a few people who might know of his works would enlighten me on what they think about his works (60A: [Conductor/composer Lukas]). In exchange, I’ll tell you all you need to know about pro footballing great Larry CSONKA, including making sure to tell you that he and I have the same alma mater and to make sure to pronounce the “Cs” in his name exactly like the letter “z” (40A: [Football Hall-of-Famer Larry]). Deal?

“Sports will make you smarter” moment of the day: LIP (4D: [Insolent talk]) & MGRS. (22D: [Baseball VIPs]) & SASSY (61A: [Mouthing off]) – How about a triple play, shall we?!? One of the greatest MGRS in the history of Major League Baseball was best known for his SASSY attitude while inside of the dugout. Hall of Fame manager Leo Durocher, who managed the New York (baseball) Giants to the 1954 World Series championship, was affectionately and/or infamously known as “Leo the Lip,” and his sass earned him 95 ejections from games that he managed, second all time at the time of his retirement in 1973. He won 2,008 games as a manager, including over 700 wins with the Dodgers, over 600 with the Giants and over 500 with the Chicago Cubs. He also is associated and credited with coining some not-so-sweet terminology that has found its way into everyday usage, including the phrase “Nice guys finish last” and “Stick it in his ear,” the latter of which he was credited with saying any time he wanted a batter on the opposing team to be hit by a pitch.

There’s no revealer, so we must look to the title for our hint to the theme, and it provides all the information we need. Types of trees can be found climbing upward in the circled letters . 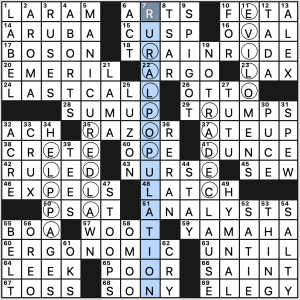 Works for me. I especially like how all the trees are a lengthy five-letters long. No chintzy elm or fir or gum trees need apply. Not even a pine hidden in CHEESE NIPS.

Plenty of fill to like: LAST CALL, TRAIN RIDE, ERGONOMIC, LUZON, YAMAHA, WOOT, and even SPIGOT. I’m not a fan of L.A. RAM, especially starting off the grid at 1a, but other than that, those large NW and SE corners are impressively filled. 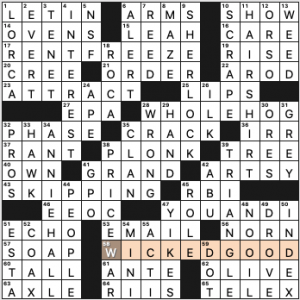 The theme builds on famous one-word Broadway musicals by taking familiar phrases that start with those words and cluing them as if they pertain to the shows:

I slowed myself down in solving by trying PLINK for 38a. [Old piano’s sound] instead of PLONK. I knew PLONK meant cheap, bad wine, but not that it was also a sound. (Just me? Or did this snag you, too?) So I had WRIN* for [All wet] and WRING was related but not right, and then I sort of misread the SKIPPING clue (43a. [Saying “No thanks” to, say]) as starting with just say, so I racked my brain trying to think of a “skip ___” phrase that worked. Oof! I was WRONG.

I encountered some spoilers when I received a text message prior to solving: “CREE, NORN, RIIS … it’s why people don’t get into crosswords.” I’d add a couple other entries to the “maybe out of reach for the typical beginning solver” list of entries I don’t think should pop up in Monday or Tuesday NYTs: 41d. [Collector of letters: Abbr.], GPO, crossing EEOC, and 65a. [Kind of message made obsolescent by faxes], TELEX. I actually saw a telex machine used one time in 1989; it was near the fax machine and there was only one gray-haired administrative assistant who knew what it was and how to work it. Given that faxes are largely obsolescent now, this entry likely perplexed whole generations of solvers. If you’re in that cohort, please enjoy the video below.

3.25 stars. I liked the theme for a Tuesday, but the bits of beginner-hostile fill jumped out. 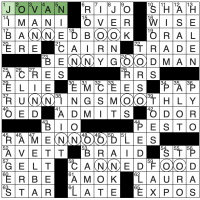 Why must we be so negative this week?? We have a bunch of “double negatives,” or the letters in NO doubled:

I envision another fun brainstorming session in making this puzzle! Minor quibble with RAMEN NOODLES in that the two N’s aren’t in the first word entirely like the other 4, but it’s all good in indie puzzles! Once again, can you think of any others? 4.4 stars this week.

There are a ton of entries that are battling it out for the Obscure-Pop-Culture-Reference-of-the-Week (OPCRotW!): 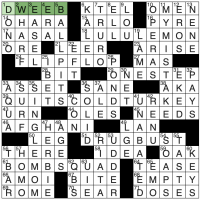 This puzzle is certainly NOT a [first word of 61A]!

Far from being a bomb, this puzzle was quite a lot of fun, albeit it took a beat or two longer than it normally does for me. I think I had an error in there somewhere. I am getting out of my groove, and there are two online crossword tournaments coming up in the next month! I might have to go buy some ginseng or something! 4.3 stars for Craig’s puzzle today.

THEME: Athletes’ names appear backwards in phrases that relate to their sport. 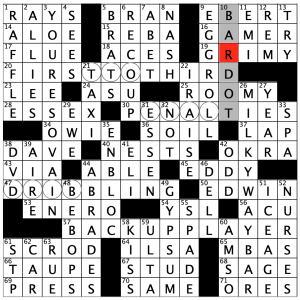 Universal loves to run themes that require circled letters. The problem is that the only place you can find the grid as it should appear is on this site. It’s run everywhere else without circles where solvers are asked to count and circle letters themselves (in this case, they’re asked to circle them backwards!). I’ve seen several novice solvers (and I think the Universal is a great puzzle for newer solvers!) try to interpret the instructions and fail. Either that or they are just turned off by it. In any case, this is an idea that, imo, needs the circled letters.

This one in general wasn’t for me, largely because I’m not a sports fan. I thought Night Train was a band, and I’ve never heard the phrase FIRST TO THIRD, though it Googles extremely well. PENALTIES was a bit of an outlier since DRIBBLING and FIRST TO THIRD are Basketball and Baseball specific, respectively.

Some crunchy stuff in the fill… BE–BOPS as a present tense verb, EN BLOC, GYPSUM, BARDOT, TAUPE, SCROD… I dunno, for me they feel a bit bland. I did like MILKY WAY BAR and was just humming the song YOU’RE SO VAIN yesterday!

I also think the found phrases with the backwards names are pretty cool.

3 Stars with circles. 1.5 Star without circles. I find it ODD that the puzzle that, per its website “…sets the standard for all daily puzzles” is unable to do what all the other daily crosswords can do. Circle the squares.