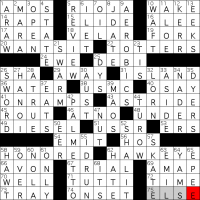 hello and welcome to episode #632 of matt gaffney’s weekly crossword contest, “Chain Letters”. for this week 2 puzzle, the instructions tell us that the answer is a two-word phrase made up of two grid entries. okay. what are the theme answers? there are a vast number of cross-reference clues, each cluing a two-word phrase split across two grid entries. and, in accordance with the title, many of them occur in linked chains:

whew. that is a lot of cross-referenced clues, making this a very choppy solve. it was only after i was done solving that i was able to really grasp the overarching structure of the theme; i hadn’t been able to appreciate mid-solve that half of the answers were both the second word of one theme phrase and the first word of another.

anyway, as you can see from the order laid out above, the theme comes in four chains of four words each. taking the first letters of each entry in chain order gives us the words WITH, FOUR, DOWN, and IOWA. reading those words consecutively in this particular order gives us a valid crossword clue—and what’s 4-down? {Declare} STATE. that certainly looks like it could be the second word of a two-word phrase that answers the clue “iowa”. what’s the first word? well, iowa is the hawkeye state, and 62a is {System that reviews line calls at tennis tournaments} HAWKEYE, so that is the answer.

although solving the crossword itself was a little irritating because of all the cross-referenced clues, i thought the meta was very elegant. putting four four-word chains into the grid to spell out a four-word cross-referenced clue is quite ingenious. just getting all sixteen of those words into the grid (plus HAWKEYE and STATE) is an impressive feat of construction—that’s a ton of theme. and i also suspect that matt went to considerable effort to put some extra red herrings into the grid to make it harder to guess HAWKEYE STATE from just the instructions. i can’t help but notice {Tree with an edible “heart”} PALMETTO, as it’s another state nickname (the PALMETTO STATE is south carolina), but maybe that’s the only one. there are a handful of other perhaps unintentional possibilities like OVER TIME, EATS AWAY, OPEN AREA, etc., but most of them reuse one or more of the theme entries.

with so much theme density, the fill in the grid is predictably strained in some places. i didn’t love seeing particles like {“Babe, ___ circles all around” (Bob Dylan lyric)} I’D RUN, a whole bunch of other partials (AT NO, A RAW, A MAP, A TRUE, I LET, SHA, TUTTI) and the proper possessive {___ “Little Red Book”} MAO’S, but overall it wasn’t too bad.

a couple other things that caught my eye:

that’s all from me. how’d you like this one?