Our theme is common phrases whose first word can be a slangy synonym for “drunk” or “stoned.” 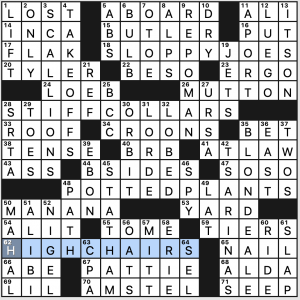 I’m not exactly sure why, but the whole puzzle feels very “bro-ey”, maybe because of the drunken bender theme but also because of action star Jason STATHAM, REPO MAN, some sown wild OATS, belligerent “IT’S ON!,” and gang members the JETS. I did however appreciate seeing LORDE, cruciverbalist Lisa LOEB, and Aisha TYLER of Criminal Minds, though I know her from Whose Line Is It Anyway?

I have yet to figure out why APORT and PUT are in the grid when they could’ve easily been ABORT and BUT. Other detractors: BESO and OTOE.

On the plus side are SCALLIONS, TAKE-OFFS, and BLONDE ALE. 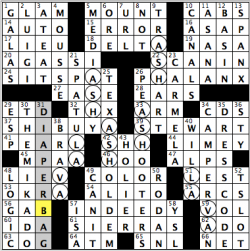 Good day, everybody! It’s Ade here filling in for your fearless Fiend leader for the day. (Don’t leave yet!!)

Today’s puzzle, brought to us by Lee Higbie and Mr. Jeff Chen, is one that is about to erupt!! Also, I hope people solving did not erupt in anger in trying to figure out what was/is going on. The visual concept involves circled letters in the top half of the grid spelling out ASH and, towards the bottom of the grid, two pairs of circled letters adjacent to each other (but in different entries) appearing to spell the word LAVA. It looks like there’s a little MOUNT that’s formed in the middle of the bottom of the grid as well (5A: [Start of many volcano names]). I’m sure SIERRAS making up the “base” of the volcano has a role in the visual as well (61A: [Western range]).

I’m sure the payoff left something to be desired for a number of solvers, especially with the absence of a standard “reveal” entry, and even I had to scan the grid to make sure I did not miss anything after completing the solve. (I might still have missed something!) However, I’m normally a fan of these visual concept/artistic grids and I didn’t mind this one at all. There was a hang-up of my own creation that cost me some time, as I confused characters from The Sopranos, initially putting in “Carmine” instead of CARMELA (23D: [___ Soprano (Edie Falco role)]). I could have looked at the clue for DIAPER BAG (31D: [Accessory that’s good for changing times?]) to make life easier, but I ended up running through the vowels to make sure I knew the third letter to SHIBUYA, which I am sure is the area of Japan where the busiest train station in the world is located as well (37A: [Commercial district in Tokyo known as a fashion center]). Hopefully COLOR was in everyone’s comfort zone, even for the non-sports inclined (49A: ___ commentary]). Probably my favorite clue/entry occurred with one of the shortest answers, with the towers reference for CDS (34D: [They’re often stored in towers]). I still have a couple of CD towers at my place. Now when am I going to pop in one of those music CDs next? I have no idea!

No real qualms about the puzzle, though I will say that I use “stand(s) pat” much more than I say SITS PAT (24A: [Hangs tight]). Honestly, I don’t think I’ve ever used “sit(s) pat” before…well, before today!

“Sports will make you smarter” moment of the day: STEWART (39A: [Actress Kristen of the “Twilight Saga” series]) – From a badass Stewart on the silver screen to a young legend on the basketball court, current Seattle Storm guard/forward Breanna Stewart, who arguably had the most-decorated career in the history of college basketball, is staking her claim to being the best women’s basketball player on the planet. While at the University of Connecticut, Stewart led the Huskies to four consecutive national championships (2013-2016), winning the tournament’s Most Outstanding Player Award in all four of those years while being named the national player of the year three times (2014-2016). Her exploits carried over to the pros, and in 2018, Stewart led the Storm to the WNBA championship while winning the WNBA MVP and WNBA Finals MVP. All this, and Stewart is just 25 years old.

Thank you so much for the time, everybody! Have a wonderful and safe rest of your Wednesday! Oh, and make sure to get your taxes filed today if you haven’t done so!!!! 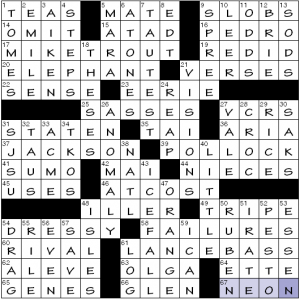 A mere three themers—two of them shortish—so there’s plenty of room for the crossword to stretch out, or at least avoid compromised fill. Well, mostly. SJSU (31d) and some others are not exactly inspired. 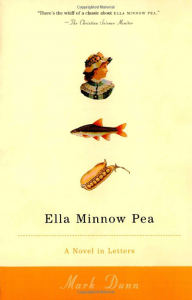 However, three-for-three for menfolk. Off the top of my head I can think of singer Margaret Whiting and the fictional Ella Minnow Pea, of the eponymous lipogrammatic novel. The former would’ve made an impressive 15-letter central spanner in place of the estimable JACKSON POLLOCK.

20a [One is always seen with a trunk] ELEPHANT. Elephantfish are a rather prolific family. 28d [Gator cousin] CROC; you guessed it – there are crocodilefish. 67a [Noble gas with the atomic number 10] NEON; NEON TETRAS are crossword-famous fish, and quite popular among aquarium hobbyists as well. 47d [Kind of juice in a screwdriver] ORANGE; ORANGE roughy, anyone?

And finally, I found an illustration of something called a logfish (61d [Cabin component] LOG): 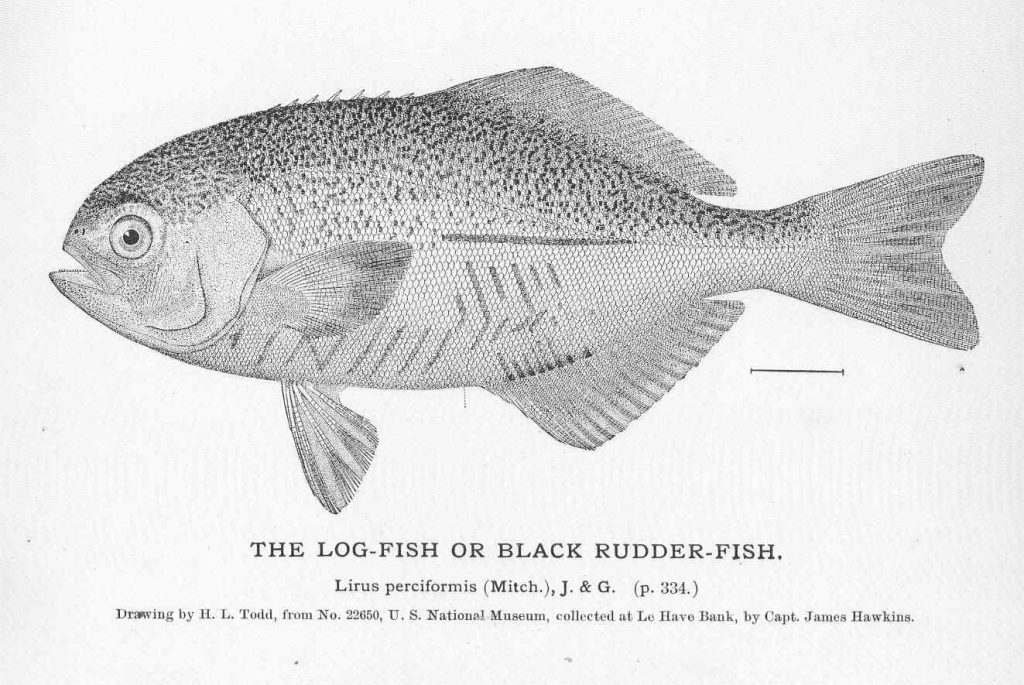 Hello everyone, and welcome back from the Steely Dan Wikipedia page, where I assume you all went immediately after solving this puzzle! I tried reading Naked Lunch several times in college and could never get past the second page, and I do not think this little fun fact has convinced me I should give it another go. 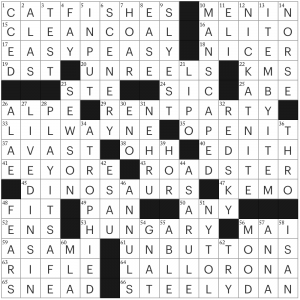 Unlike Naked Lunch, I thoroughly enjoyed this puzzle. The long entries are all excellent, and the cluing is overall quite clever. There is one dupe (which didn’t bother me at all, but which I suspect some solvers will take issue with), and one clue/entry combo that I sort of side-eyed, but otherwise this is a clean, enjoyable grid! Let’s dig in.

These are all so good! What an excellent set of long entries! Beautiful.

Overall, lots of stars from me for an exciting and pretty clean grid! See you all on Friday. 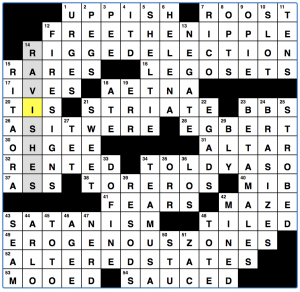 This week’s AVCX is a themeless from Amanda Rafkin that was described as “easy-ish”, but definitely played at the 4/5 difficulty it was given for me.  Here’s some highlights: 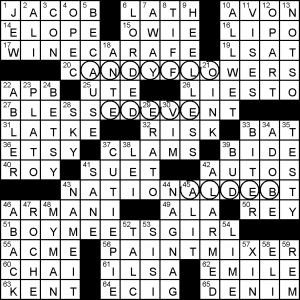 As a romantic concept, BOYMEETSGIRL is trite. As a theme concept, it’s a lot more creative. Each entry has a boy and a girl name meeting in the middle: ANDY/FLO; ED/EVE; and AL/DEB.

That said, the puzzle’s cultural frame of reference often felt different to mine (which happens). I have never encountered CANDYFLOWERS before, but it seems suitably American. Also not sure what a [Seafood boil..] is (nor would boiling be my ideal way of eating seafood), but “seafood” to CLAMS is not a big leap. Also never been in a hardware store with a PAINTMIXER, but I’m not exactly a hardware store habitue. Similarly, I’ve never heard of the “gravity wedges” in the HEELLESS clue, but my feet are sore just looking at photos of them. Ballet flats are way cuter in any case! Note that I’d count all of those entries as neutral to positives in the puzzle, puzzles are allowed to be about things outside of one’s frame of reference!