Fireball is a contest this week. We’ll post our review after it closes.

The theme today removes letters B when they precede letters U. 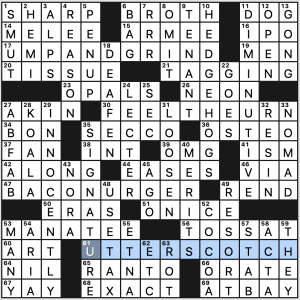 Most of these are pretty groan-worthy, but if that’s how you like your crossword wackiness, you probably enjoyed this.

I’m not so keen on the title which is the basis for the entire puzzle. I get that we’re meant to re-parse it as “B less U,” but should it be interpreted as a mathematical problem (“B – U”) or is the first part adjectival (i.e. “B-less U”)? This latter one makes the most sense, but as most U’s are already B-less (whatever that means), it’s kind of awkward. And if a solver didn’t even recognize that they needed to re-parse the title, they probably just shrugged it off at best, or else they were left scratching their head.

Elsewhere, I didn’t know SECCO [Painting on dry plaster] nor ACTA [Official proceedings]. You can also throw in the prepositional phrases TOSS AT (TOSS TO makes more sense to me), RAN TO, and PEN UP in the irksome fill category.

There are definitely highlights, though: the Queen of Hearts’s HEDGEHOGS,  a peaceful MANATEE, and the fun word DIMINUTIVE. Hannibal LECTER is always creepily fun as well.

Evan Kalish has this Thursday’s NYT, and something doesn’t make sense: 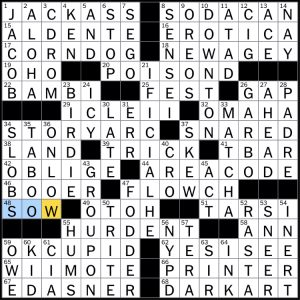 As the revealer says, each set of three black squares represents the letters ART, making our theme answers the much more sensible POISON DART, ARTICLE II, FLOWCHART, ARTHUR DENT, and ARTIFICIAL HEART.  This was relatively straightforward as a theme, but some tricky cluing helped keep this at a Thursday difficulty level.

Is there anything more NEW AGE-Y than the commercial for Pure Moods?

I just searched for phrases for my new pup that would work with this theme today, but the only slightly viable one I could find was HELLISHNESS, which is a shame. Haha! 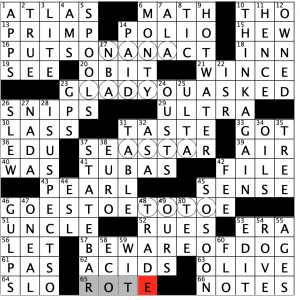 As far as hidden word themes go, this one hits all the standards: The hidden word bridges parts of the phrase, they are all very common phrases, and the dogs themselves are all iconic. Guess it would be hard to include LASSIE or RIN TIN TIN in this one!

The revealer didn’t quite land for me though. I’m not sure what the BEWARE part has to do what the themers. The title, Pet Carriers, seems much better to me.

There is, of course, the circled letter issue (Universal can’t circle letters in its normal publications, though solvers can come here to access the grid as it “should” appear). For this grid, it didn’t bother me as much as it usually does though. I still find it strange- just the  volume of puzzles that Universal is willing to publish that would benefit from circled letters when they’re unable to circle the letters.

Nice clue for TIC! [What the odd letters in “twitch” spell]. Universal runs a lot of clues in this style. Love em. 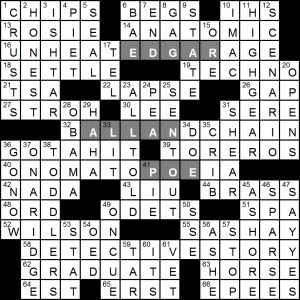 Today’s unusually specific theme conceals EDGAR/ALLAN/POE in three entries, which is revealed at a generic DETECTIVESTORY. I’m guessing it’s a cold climate thing to talk about an UNHEATEDGARAGE? Because here we’d call that a garage.

I don’t think I’ve ever seen IHS in a puzzle before? I actually considered initially that the answer was INRI and those black squares were representing some kind of shenanigans. The LA Times is far less likely to have Thursday shenanigans, but one never rules out the possibility.

Also, what kind of privileged monsters leave the pizza CRUSTS? 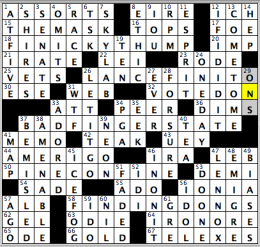 Good day, everybody! The weekend is nigh, and hope you’re all continuing to stay safe out there!

Well, outside of beachgoers in states that have opened up its beaches, the closest enough people will get to seeing a shark is either a) during Discovery Channel’s “Shark Week,” or b) solving this puzzle, as nouns are reimagined as puns when the letters “FIN” are added in them!

Outside of “Seven Nation Army,” I really do not have a strong knowledge of the albums and music produced by The White Stripes, and that meant not recognizing what “Icky Thump” was until looking it up after finishing today’s solve…and then realizing I had heard the song a couple of times before without knowing the title of it. Speaking of songs, I have heard LET IT GO a few times, but not enough that it becomes an earworm — and I am aware that “Let It Go” can be a vicious earworm the likes of what “Baby Shark” has been the past couple of years (26D: [“Frozen” showstopper]). In my haste to solve quickly, I initially put “FML” then “OMG” before arriving at WTF (31D: [“UR kidding, amirite?”]). Each corner had some long fill, from the seven-letter across entries in the northwest and southeast, and the eight-letter entries in the northeast and southwest. I highlight one of the entries in the next graph, but probably the one that stands out the most is IF I DID IT, and not for the right reasons (12D: [2007 book that’s a so-called murder confession]). In sum, we have entries that allude to both O.J. Simpson and Lance Ito, plus two entries in which the clue includes “trial participant,” with ATT (33A: [Trial participant: Abbr.]) and PEER (34A: [Trial participant]). All of that has just thrown me back to 1994, when my worries included trying to get the highest overall grade point average in my sixth-grade class and watching to see if the New York Knicks would win the NBA Finals and I could go to the parade if they did. (Alas, both the Knicks and I finished as runners-up.) Speaking of 1994…

“Sports will make you smarter” moment of the day: THE MASK (15A: [Cameron Diaz’s first movie]) – One could easily argue that there was a person even more popular than the actor Jim Carrey whose name was pronounced exactly the same way. And that that person was known for wearing a mask, and did so right around the time the 1994 movie The Mask was still very relevant in pop culture. Well, in the Washington, D.C. area during the mid 1990s, Capitals fans cheered on every performance from former National Hockey League goaltender Jim Carey (one “r” in last name), who burst onto the scene in the 1994-95 season with 18 wins in 28 games and was named to the NHL All-Rookie team. The following season, Carey, who was nicknamed “The Mask” and “The Net Detective” (the latter a play on Jim Carrey’s lead role in the movie Ace Ventura: Pet Detective), was the best goaltender in hockey, winning 35 games while posting a goals-against average of 2.26 as he was awarded the Vezina Trophy as the NHL’s best goaltender. Carey’s NHL career soon went up in smoke like Carrey’s Fire Marshal Bill character in those recurring skits on In Living Color, as he won only 24 games in the NHL after that 1995-96 season.