Jim P. here sitting in for Amy. It’s been a long time since I blogged a NYT puzzle, so bear with me (see what I did there?). 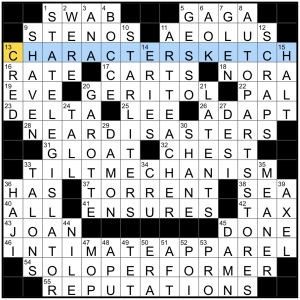 Right off the bat you should’ve noticed that happy-looking face. That immediately put me in a good mood because it looks like a friendly teddy bear. Winnie the Pooh, maybe? What do you see?

However, I wanted a little more in the grid that related to the face. The closest I see is CHARACTER SKETCH [Literary profile] at 13a, but that’s about it. ART TEACHER (with the nice clue [One who might grade on the curve?]) might be related since the grid seems like one of those art tests we used to see in old magazines and newspapers. But still, I wanted something more specific. 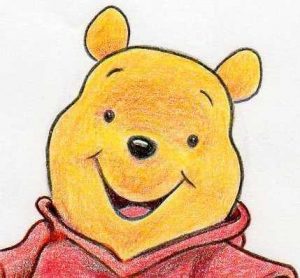 But it was never to come. I had to be satisfied with the heavily interconnected and stacked long fill which, as it turns out, is quite good. In addition to the aforementioned, we have STATE LEGISLATOR, AUTO PARTS STORES, NEAR DISASTERS (which was hard to parse), INTIMATE APPAREL, SOLO PERFORMER, and REPUTATIONS. Also, TILT MECHANISM which is a phrase I had to infer, and STARLITERS which maybe I heard once or twice in my life but certainly didn’t remember.

I had no clue on AEOLUS [Greek god of the winds]. If you didn’t know the crossing GESSO, you might’ve gotten stuck on the E. But most everything else is fair.

There are few modern references in the grid aside from DAMON Wayons, APU, and Wookiees. In contrast, there’s GERITOL, actor LEE Majors, STARLITERS, SHANE, and Leroy Brown skewing things to the older crowd.

I was won over from the start with the grid design, and the fill, while not terribly sparkly or modern, is executed cleanly and impressively given the grid’s openness. Four stars from me.

Oh, this was a fun one. I loved all of it– the long stuff sparkles, the short stuff is clean, and the clues! are fantastic! Thank you for this gorgeous lightly challenging puzz to ease us into the weekend. 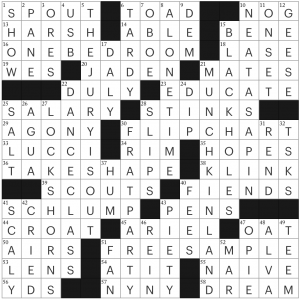 Long stuff: Most of the long entries are vertically aligned, which I love to see. It makes me move through the grid in a different way than I normally would (although not to the extent that diagonal-symmetry grids do, which I’ve recently learned and am excited to continue solving!). The longest entries are THE JURY IS OUT and MUNCHKINLAND, both of which are A+. Other longish entries include: LOCKS HORNS / DANCE CLASS / BLACK HOLES / NEAT AS A PIN / FRAT PARTY / ALONE TIME / ONE BEDROOM / FREE SAMPLE. I’m not sure I’m 100% on board with [Wrangles] as the clue for LOCKS HORNS — I think of wrangling as what a cowboy or cat-herder does, while locking horns is what the cows (or metaphorical figheters) do? Also, I am personally full up on ALONE TIME, and RIP grocery store FREE SAMPLES, yet another casualty of COVID-19, and

Overall, all the stars from me for an interesting and solidly-constructed puzz! Happy weekend, team.

Now this is a theme I can get behind! WINE BLENDS is the revealer at 59a and is clued [Mixed drinks? … or a hint to each circled set of scrambled letters]. The other themers contain scrambled grape varietals. 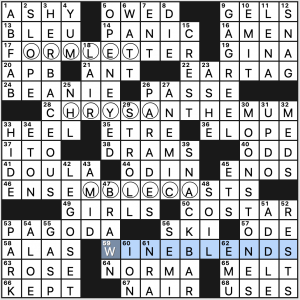 Three reds. It would have been nice if a fourth themer was added to provide a balance of whites and reds, but I’ll take this.

Despite our (my wife’s and my) enjoyment of all three of these wines, these were hard to unscramble, especially the last one. In fact, I didn’t even try to do it during the solve, but returned to them afterwards, and even then it took some doing. And so, if you don’t know your wines—and even if you do—the theme might be of little help during the solve.

But that’s okay because the crossings are all fair and the cluing is straightforward enough. And the fill is plenty fun, too. I like OPEN-EYED, GAG REEL, LEGO SET, MOONSTONES, SNACK BAR, PARADES, PAGODA, BEANIE, and even HERBACEOUS (maybe because it sounds snooty and pairs well with the snooty wine theme).

This was a fun puzzle even though the theme is rather opaque and not necessarily all that helpful during the solve. But the fill is top notch. Four stars.

The letters MS are found in each themed answer – the title referring to Gloria Steinem and Dorothy Pitman Hughes, founders of Ms. Magazine. 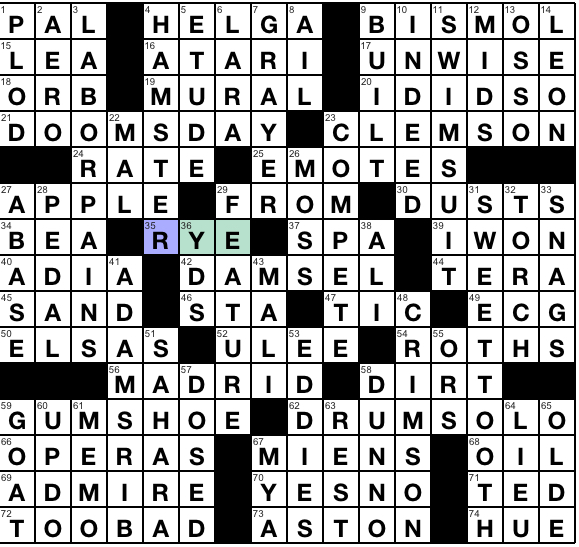 Once I caught onto the theme, it gave me a smile – but it took longer than I should admit for me to get to figure it out. I was also impressed that the MS in each answer is either right in the center – or in the case of the odd-numbered words, as close as possible, with the matching word having the opposite layout. My favorite answers of the bunch were DOOMSDAY and ADAM’S RIB – the latter because it makes me think of the Katherine Hepburn movie – not so much because of the biblical reference.

Interesting grid shape, with some extra room at 16×15 making for a smooth solve. I struggled more in the north east than any other part of the puzzle – but no unfair crossings to be found. Bonus long downs of SWEET TOOTH and LABOR PAINS were fun to come across, though I was expecting them to be themed because of their length. 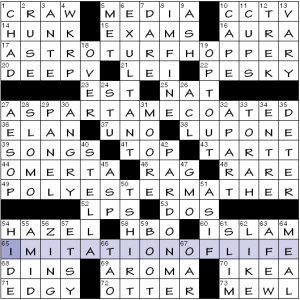 Why is the theme so good? (1) the wordplay is consistent, with the ersatz items widely accepted as directly correlated to the originals, (2) the phrases and names are solidly in-the-language, (3) the resultant entrees are all 15-letter grid spanners. Really impressive stuff!

No real junk among the ballast fill, either. Always a plus.

So here’s an unironic 1975 cover of Marvin Gaye and Tammi Terrell’s “Ain’t Nothing Like the Real Thing” by the Dynamic Superiors. While it may be more dynamic than the original, I feel it’s inferior.