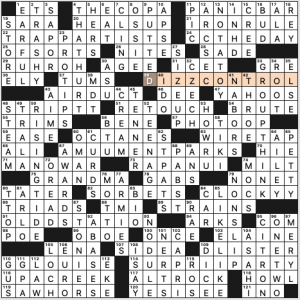 I don’t think the puzzle was as hard as my comparative solving time suggests—I was sort of distracted while solving. And then our dinner arrived before I was able to blog the puzzle … and then I got waylaid by the Liberty jigsaw in the other room and here it is, two or three hours later! Life is a puzzle.

The theme plays with words that contain a syllable with a Z sound that can be represented with plural letter names, if that makes sense. Like so:

Neat theme. Took me a while to figure out what was going on.

What else? Lots of stuff:

This puzzle’s too big to go back and tally up the representation numbers, but it felt inclusive and I liked the overall vibe, fill, and clues along with the theme. Four stars from me.

The theme answers are all clued [Fast] or [Furious]. When I started to write this I noticed the x in the title and realized each [Fast] answer crosses a [Furious] answer, and there are four pairs. It’s an interesting construction, but that tidbit didn’t make it any faster (!) or more fun to solve. The theme gets a solid “meh” from me. The theme rundown: 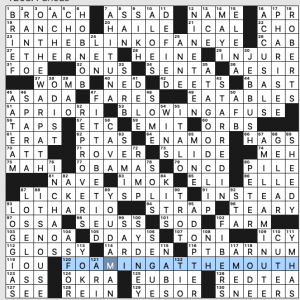 What I didn’t know before I did this puzzle: that the insurance salesman in “Groundhog Day” is named NED (never seen it) and that the soprano in “The Flying Dutchman” is SENTA (never listened to it). I also did not know that Binghamton has a AA TEAM named The Rumble Ponies – I was happy to learn that!

Posting a quick write-up today! Rushing to get graduation videos ready for my students (July 31st graduation! Who would’ve thought?)

THEME: Meta! But the title says it all! 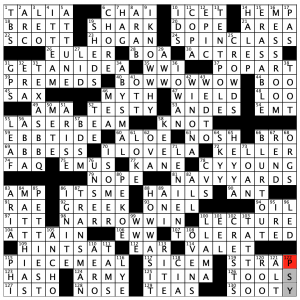 No real “theme answers” per se, unless I’m missing something (which is very possible). Perhaps a little wink on one of the clues? I’m talking about 21A [Length x width]. But if you look at some awfully strange letter combinations, it’s not too hard to figure out what’s going on.

There are eight sets of four-letter boxes where the letter is repeated (am I saying that right?). I have highlighted them in green on the grid I printed out since my photoshop program no longer works since I updated my Mac. But they’re pretty easy to spot, especially because it is particularly strange to see the letters W, Y, and B appearing frequently right next to one another. 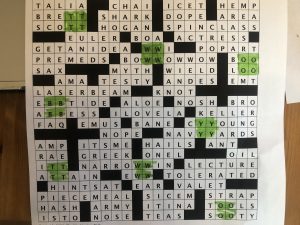 I picked up on the theme at the CY YOUNG / NAVY YARDS / SKYY / HEY YA section, which was about halfway through for me, and I figured each of the repeated letters would spell the phrase we’re looking for. Bingo! TWO–BY–TWO! The length x width gives us FOURSQUARE!

Played like a quirky themeless with a hint of mystery for me, but in Evan’s hands that’s never bad. HALEP was new, and of course fantastic clue for TRANS MAN.

Overall, a pleasing solve as usual.

If you’re looking for a soprano, you’ve come to the wrong puzzle! 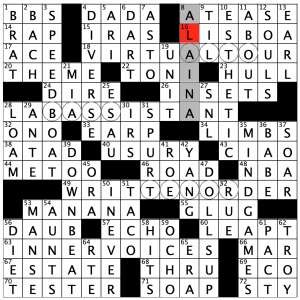 Solid revealer and idea, but I feel like I’m solving a lot of hidden word themes in the Universal lately! Lots of circled squares, which Universal cannot print in their regular publication or online webapp. This one doesn’t suffer too badly from that pitfall imo.

It is strange that SOPRANO is missing. I mean, of course you’re not going to find a phrase that is able to hide SOPRANO (though I’m sure Val gave it a onelook search just for fun), but it certainly feels incomplete without that voice part, which frequently carries the melody!

BABE, DOLLS UP, and I NEVER! Gave this an old-timey feel. I can’t hear the word BABE in that context without thinking of the play Oleanna.

Really liked the clue for 39D [Apt part of a sad song?] DOWNBEAT. The clue for AT EASE!, on the other hand, seems a bit inaccurate: [“Chilling” words from a drill instructor?]. I mean, even when they’re AT EASE, do they really look like they’re chilling?

Overall 2.9 stars from me, with or without circles.

Each of today’s theme answers is an idiom that hints at some sort of measurable change. The revealer, MOVING THE NEEDLE, is clued [Making noticeable progress, or a theme hint]. 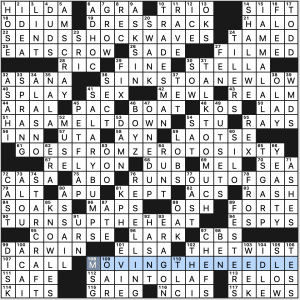 A nice collection of phrases. Each one is common enough, and I especially like how each one affects a different measuring device.

Beyond the theme, as usual with Ross Trudeau and David Steinberg, the fill is sparkly and strong. Highlights include “AMSCRAY!,” “SHALL WE?,” I AM MALALA, DRESS RACK, TALK TOO MUCH, SALARY BUMPS, EATS CROW, and THE TWIST with a great clue [Checker’s move?]. I liked seeing STARCRAFT [Intergalactic PC game], Warcraft’s spacey cousin which didn’t catch on the way the fantasy-based game did. Non-gamers maybe won’t have heard of it, but the title is fairly inferable, given the clue and the popularity of games ending in -craft. I also liked seeing DARWIN [“Survival of the fittest” naturalist], as I recently read (listened to the audiobook of) Tim Mason’s The Darwin Affair, an enjoyable Victorian thriller. Sadly, there wasn’t as much Darwin in it as I would have liked, but I recommend it nonetheless.