This month, we’re asked “What song in 3/4 time is hinted at by this puzzle?” Do I hear a waltz? 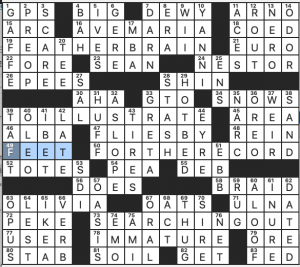 First observation: Each of the four 12-letter themers can be divided up into three words of four letters each, like thus:

Second observation: Aha! Three-four time! It does what it says on the packet.

Third observation: Each word in those trios can be found elsewhere in the grid, with one letter changed:

Fourth observation: The changed letters, in grid order, spell out GREENSLEEVES, which, some musicologists argue, is in six-eight time. I’m not enough of a musicologist to really know the difference (check out my writeup of this week’s WSJ Contest if you’re interested in how much I’m not a musicologist), so I’ll take it.

The story goes that “Greensleeves” was written by Henry VIII for Anne Boleyn, but most historians date it at later in the sixteenth century — when it was popular enough for Falstaff, in Shakespeare’s The Merry Wives of Windsor, to refer to it:

Let the sky rain potatoes; let it thunder to the tune of ‘Green Sleeves;’ hail kissing-comfits and snow eringoes; let there come a tempest of provocation, I will shelter me here. (V.v.6-9)

You want a video of someone singing it? Where do I start! It has been covered constantly since the sixteenth century (although many people are likely more familiar with it as the Christmas carol “What Child Is This,” the lyrics to which were written in Great Britain in the last nineteenth century); some of my favorites include:

Getting back to Henry and Anne, the song gets name-checked a few times in Six — which you know is my favorite musical if you’ve read any of my posts:

Henry sent me a poem all about my green sleeves
I changed a couple words, put it on a sick beat
The song blew their minds, next minute I was signed
And now I’m writing lyrics for Shakesy P