This week, we’re looking for an eight-letter word that describes some song lyrics. Full disclosure: I didn’t solve the meta, asked for help, and the explanation made sense but I’m still a little stumped. 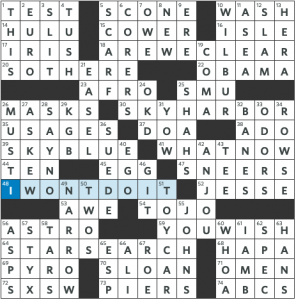 We’re looking for an eight-letter word, and there seem to be eight themers:

And then a suggestive clue at the end:

The other famous children’s song is, of course, “Twinkle Twinkle Little Star.” But this is where I hit a dead end — I kept seeing YOU WISH and then STAR and thinking of “When You Wish Upon a Star.” I knew “Twinkle Twinkle” was likely the key, and I saw some connections with its lyrics, but nothing was coming together. I was traveling and put it away for a few days, then solving pal Gideon offered some more direction. I was feeling pretty stupid, even when he gave a stronger hint, that the first word in each themer was important — “ARE SO SKY SKY WHAT I YOU STAR huh?” Finally, he suggested that if each song shared a melody, what could I do with the lyrics?

OH! A cypher! But even then I couldn’t make it work — here’s my pathetic attempt: 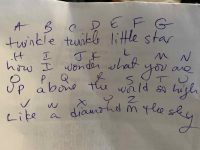 The first line is correct, but I could just not make it right. Turns out the internet is helpful for this sort of thing: 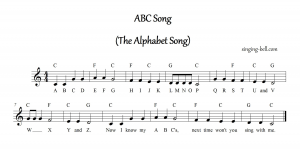 I still can’t make my brain see how LMNOP = WHAT YOU ARE … but what the correct cypher does is this, if, I guess, you sing the ABCs correctly, which apparently I have never been doing:

Given that key, the words ARE SO SKY SKY WHAT I YOU STAR spell out PUZZLING, which is an eight-letter word that describes some song lyrics and our answer, and also a good descriptor of my experience trying to solve this meta.

Here’s the ABCs set to another tune: