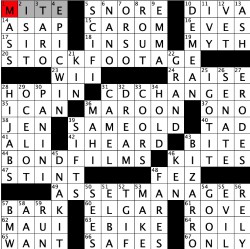 Here’s a theme that might be too on the nose for the Wall Street Journal, but does just fine in the Los Angeles Times. Each theme entry begins with a financial instrument — STOCK, BOND, or CD:

The fill is fine; no extra-happy surprises nor extreme disappointments. I did like the inclusion of HIJABS at 28D, although I’d love to see HIJAB at some point clued in the more general sense of modest dressing, as I understand it can mean that and not just a head scarf specifically. And of course I’ll never be upset to see my future second husband Idris as a clue for ELBA (51D) instead of the tired old Napoleonic isle. 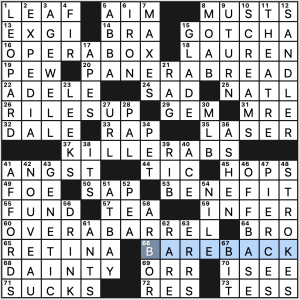 That works well enough for a straightforward Monday theme. All the phrases are commonly known and the keyword spans multiple words each time. A good set.

The nine-letter central answer results in largish corners filled with stacks of sevens. No marquee fill entries today, but most of those sevens are strong, such as LEOPARD, EXPEDIA, NOUVEAU, and OFF BASE.

The only entry that registered on the scowlometer is EX-GI [Nov. 11 honoree]. I’m good with MRE [Field ration for a Pvt.], having enjoyed a few of those in my day, though I can imagine those are just random letters to a lot of people. MOAB [Biblical kingdom near the Dead Sea] isn’t really Monday fare, but the crossings made it simple enough. 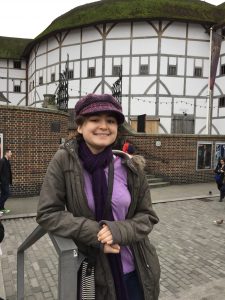 My daughter’s high school senior portrait outside the Globe THEATRE

Solid theme and grid, though not as sparkly as we’re accustomed to. 3.4 stars.

We’ve had some sort of snafu on this end (technical or otherwise), the upshot being that you get me instead of Jenni this Monday morning.

Our theme is phrases with a very specific structure. Each starts with a positional word followed by a preposition (a different one each time), then THE, and then a final word. 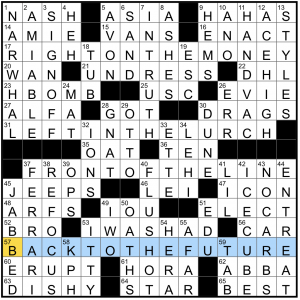 At first glance, I thought the theme was all in the first word of each theme entry, so it seemed rather light. Plus, I would expect the word RIGHT to be on the right side of the grid. Same with the word BACK. Lastly, three of the positional words change meaning; FRONT does not.

But once I realized each phrase is of consistent form, I liked the theme a lot better. Because of this, they all roll off the tongue, making for a fun set.

Same goes for the fill. Similar to today’s WSJ puzzle, there are no long marquee answers, but the grid is loaded up with sevens, and plenty of them sparkle: NARWHAL, SIGN-OFF, IN TRUTH, HAND-VAC, ACE-HIGH, FERRARI, FLU SHOT, ICE CUBE, and “I WAS HAD!” It would have been nice to have a couple of juicy long entries in the mix, but these are pleasant.

I could pick some more nits, but it’s late, so I will leave it at that. The theme grew on me as I looked at it more closely, so I’ll put this one at 3.7. 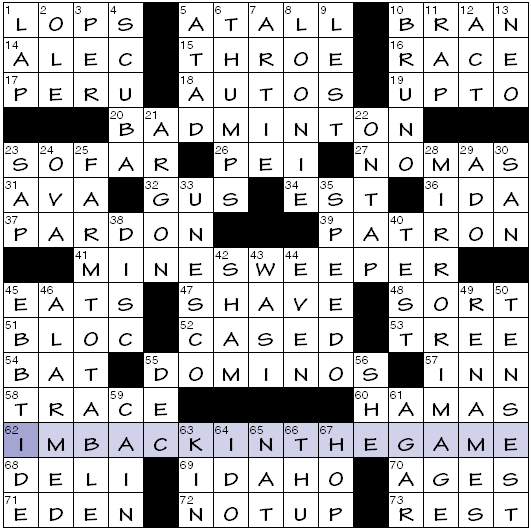 So, three themers of modest length, plus a grid-spanning revealer. The left-right symmetry shakes this up A TAD (5d) this Monday.

And that’s all I have this morning. Got to run!

Note to self: stop trying to solve Monday New Yorkers before coffee. This puzzle from Natan Last has some really lovely entries in it, but my brain could not process them without caffeine. This may be my slowest New Yorker solve ever! 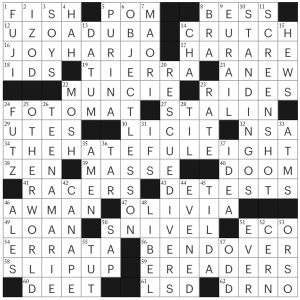 Down the middle we have THE HATEFUL EIGHT, which is a movie I tried to watch but could not get through on account of the over-the-top gratuitous gore and violence. It’s a nice 15 though, so it gets a spotlight in the central location. Other long stuff included OTHERWORLD / TEENA MARIE / OBJECT LESSON / RESCUE DIVERS / STANDING O’S / SCREENSHOT. I had little mistakes all over my grid (see above re: coffee), so some of these took foreverrrr to unravel. Most notably, I spent several minutes trying to parse STANDINGOS. I think I was primed by the Django reference in the clue for THE HATEFUL EIGHT to read this as STAN-DINGOS (rhymes with “mandingos,” a major plot point of Django Unchained). It didn’t help that I had ACLU v. USA instead of NSA, and a bunch of ??s from the very tricky cluing in that section.

Overall, solid (extremely challenging!) Monday puzz. Stars from me for an interesting and different grid design and some nice long entries.