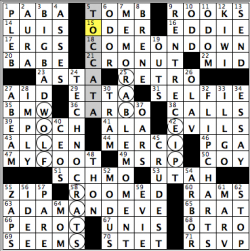 Hello everyone! Hope you’re all well and hope you got fluids in you all day and/or stayed in to remain in temperate conditions. Man, it was hawt outside today!!

Today’s grid hit a soft spot for me, as four theme entries contained circled letters that had to be read backwards as the fifth theme entry, FLIP CHARTS, clued you in to the gimmick (32D: [Presentation visuals that inspired the puzzle theme!]). A lot of my play-by-play broadcasting career involved creating flip charts, especially during football games. I would take a manila folder and put the offensive and defensive depth charts/rosters on all four sides of the folder, flipping it over depending on which team had the ball. Oh, the memories!

Don’t know why this occurred, but after putting in the first theme entry during the solve (big bad wolf), I immediately thought to read the circled letters backwards, which led to a super-quick identification of the gimmick going on. (I did not have in mind the title of the grid by the time that happened.) To see lively entries such as COME ON DOWN (18A: [Enthusiastic “The Price is Right” invitation]) and ADAM AND EVE and then notice that neither are part of the theme of the grid was especially pleasing (63A: [First couple?]). (By the way, I dare you to not have the voice of Rod Roddy in your head right now!!) Here is hoping I can slip this bit of info in here without getting berated: while I’m sure ODOM is awesome in his role on the musical mentioned, I have still yet to watch it, even though it was made available to stream/watch for free just a few days ago (11D: [“Hamilton” actor Leslie ___ Jr.]). Maybe one of these days, I’ll watch, and I’m sure that I’m missing out on something special. Unless an intrepid constructor wants to actually put “para-aminobenzoic” into a grid, guess we’ll just have to settle for PABA at the moment (1A: [___-free (sunscreen description)]). Probably biggest highlight of the grid was the hilarious clue to MY FOOT (47A: [Skeptical comment from a podiatrist?]).

“Sports will make you smarter” moment of the day: CARBO (36A: [___-load (prep for a marathon)]) – One of the greatest baseball games of all time, Game 6 of the 1975 World Series between the Cincinnati Reds and Boston Red Sox, featured one of the most famous home runs ever hit, Carlton Fisk’s waving-the-ball-fair walk-off homer in the 12th inning that delivered the Red Sox a 7-6 victory and forced a decisive Game 7. But Fisk’s famous heroics were preceded four innings earlier by those of Bernie Carbo, who came off the bench with the BoSox down 6-3 and crushed a pinch-hit three-run home run to centerfield with two outs to tie the game at 6. Carbo, who had played earlier in his career for the Reds, only registered seven at-bats during the ’75 Fall Classic, but recorded three hits — all for extra bases — with two of those hits being home runs. Don’t believe everything I just said, including the story that claims that Carbo, upon reaching third base after his Game 6 home run, yelled to Reds third baseman Pete Rose and said, “Hey, Pete, don’t you wish you were that strong?”? Well, just watch the video…

That was fun! Our theme is FILL IN THE BLANKS (61a, [Complete, perhaps]) and each entry (aside from the themers) has a FITB clue. The themers are examples of actual places where people FITB. 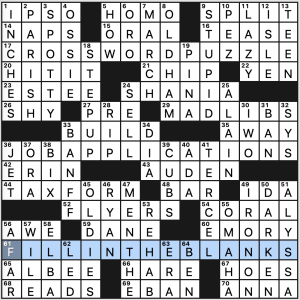 Once I realized all the clues were FITBs, I wondered how I would like the rest of the puzzle. Would it get repetitive or stay lively? For me, it was the latter. The gimmick made each entry quick to solve and so I felt like I was able to speed through. It wasn’t until near the bottom that I hit a couple of snags (I’m looking at Abba EBAN and Rotary HOES in particular). But crossings resolved those easily enough.

Necessarily, there aren’t any long phrases in the fill. But I hardly missed them since I was taking advantage of the format and solving for time. It certainly would be possible to have a long non-theme entry in this grid, but it would have to be the right one (or two, for symmetry) to lend itself to the FITB scheme. Something like [“I Want a ___ For Christmas”] (HIPPOPOTAMUS). As an exercise, what’s the longest FITB you can come up with? Of course, there are already three grid-spanners in this grid, so any long bits of fill would have to cross at least two of them. That’s a pretty tall order given the cluing constraints.

So there’s no really flashy fill, but that’s not what this grid is about. What’s there is solid enough and supports the theme and gimmick, so no complaints from me.

This was definitely something different, and I liked it. How about you? Four stars from me. 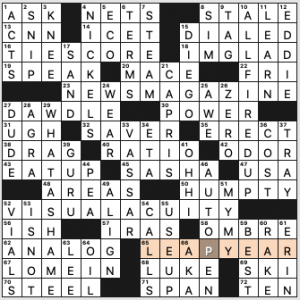 What a good Tuesday puzzle! Fresh theme, smooth fill, crisp cluing. It’s what keeps me coming back for more of Zhouqin’s crosswords.

The five theme clues all consist of the the digits 20 and 20, with assorted punctuation and spacing options, and “, e.g.”:

How neat do those clues look when they’re all bundled together?

The theme left space for a couple good 10s, “WHAT A SHAME” and ALL FIRED UP.

4.5 stars from me. Straight-up and simple, no hard stuff, no obscurities, just smooooooth. 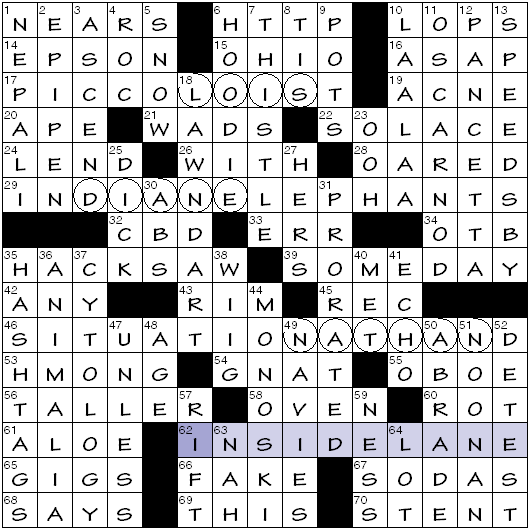 Two actors and a comics character frequently seen on the small and big screens; two women and a man. I’d call that cohesive yet relatively diverse, if a bit pale.

Since it’s been ages since I actively ran my own blog, please allow me to digress on the sort of thing that might have comprised some content there.

One of my pet peeves is that whoever it was who decided that words painted on streets and roads should appear bottom-to-top—the logic presumably being that we read them in the order encountered while moving forward—was horribly, horribly wrong and misguided. The truth is that the messages—by necessity concise—are processed as a unit and we read them as normally, which is to say, top-to-bottom. Thus are born nonsense phrases such as ONLY EXIT and of course LANE FIRE, which I’ve always thought sounds like it would be an excellent parodic name for a detective: “Lane Fire, Private Eye!” You just know his middle name actually would be “Danger”. 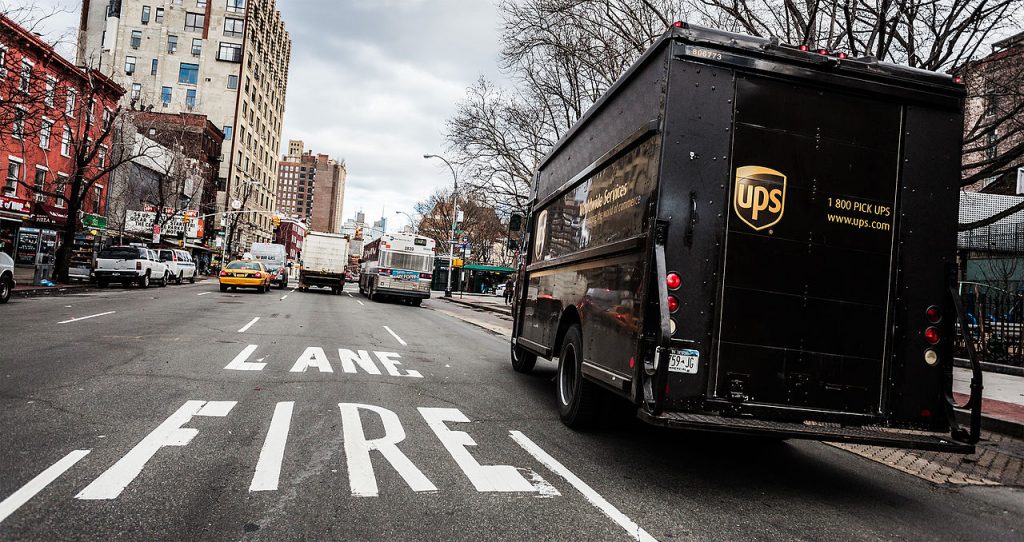 All right. Getting back to the situation at hand, let’s look at the ballast fill.

On that cheerful note, I’ll wrap up this write-up on a modestly charming Tuesday offering. 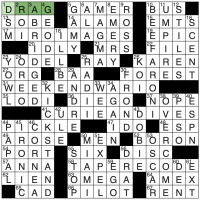 The theme answers this week (in Jonesin’ #998!) is straightforward: take a phrase that has a word with three R’s in it, remove all but one, and let hilarity ensue!

Clever! As I always say, the brainstorming here must have been quite a hoot! Another fun Jonesin’ puzzle. Only one more before puzzle #1,000! 4.3 stars this week. 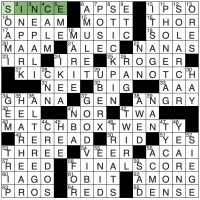 This is definitely a name I do not know in the byline, but we have a fine puzzle nonetheless. We actually have quite a clever theme, which may take you a second to see how it meshes. (OK, it took ME a second!)

So we have a few different meanings of the word score, not necessarily a word that precedes or follows a word in the themers, as is usually the case. Sheet music is known as a score, you score something when you put a notch in it (kind of!), and Abraham Lincoln has taught us all at a young age that a score is 20 years. Clever! I like that it isn’t super simple, yet in the end it is rather simple. Does that make sense? I hope so! 4.4 stars today.