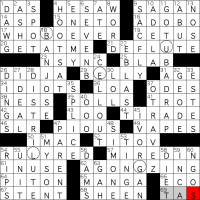 hello and welcome to episode #633 of matt gaffney’s weekly crossword contest, “Harmonize!”. for this week 3 puzzle, the instructions tell us that the answer is a five-letter musical instrument. okay. what are the theme answers? i don’t know! there are some 9- and 10-letter entries in a pinwheel patten:

okay, wait, maybe i have something. yes, this is definitely something. WHOSOEVER contains OSOE, which could become the musical instrument OBOE if you change one letter. not only that, the S crosses the first letter of {Sharks play there} SAN JOSE, so changing it to a B produces BANJO, another musical instrument. this has to be it.

all right, i found the rest of them. each of the four longest answers contains such a letter, as does the central 7-letter down answer. in grid order from top to bottom:

taken in order from top to bottom, these letters give BUELG. that’s not a musical instrument, but it’s an anagram of BULGE, which is a world war ii battle. and if you read from left to right instead of top to bottom, you get LBEGU. maybe you need to add an A and scramble to get BELUGA?

i’m kidding, of course. the five-letter musical instrument is the BUGLE, which requires you to read off the letters in, i guess, clockwise order starting from the top and spiraling into the middle at the end. i don’t know. that’s a little arbitrary, and the only blemish on a pretty cool meta mechanism. but it wasn’t grossly inelegant, and with all five letters identified, getting a musical instrument out of them was not difficult at all. i imagine matt tried to put them into the grid in top-down order and it just wasn’t working out.

the fill in this puzzle was sufficiently strained that i thought there might be quite a lot more going on. the top-middle section with {“What about the boy, ___ it all!” (“Tommy” lyric)} HE SAW, {___ watch (promising newcomer)} ONE TO, and—speaking of arbitrary!—{Apartment two floors up from Kramer’s, on “Seinfeld” (well, if the apartment building actually had two more floors)} SEVEN B made me wince a couple of times. but the aha moment was a nice payoff.

that’s all for me. what’d you think about this one?