IT’S A LONG STORY (34a, [“We could be here for a bit…,” and a hint to each circled word]) indicates that the circled words in the other theme answers are words that mean “a long story.” 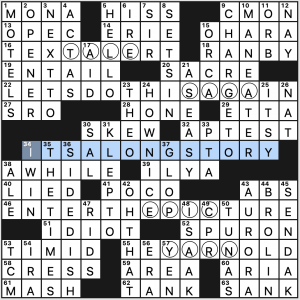 I don’t know that I would call a TALE or YARN necessarily long stories, but for the purposes of the theme, they don’t bother me. I do like the inclusion of the 15-letter grid spanners. Seems appropriate.

Highlights in the fill include the colloquial “OH, THAT” and “HOW NICE” as well as Hall’s and Oates’s MANEATER, in case you needed an ear worm.

There sure are a lot of phrases ending in prepositions in the grid—enough to be noticeable. NEXT TO, ACT AS, SETS IN, CHARGE TO, SPUR ON, and RAN BY. Each one on its own is fine, but together they get a little clunky.

And of course, you know I wasn’t going to let you out of here without some Hall and Oates. 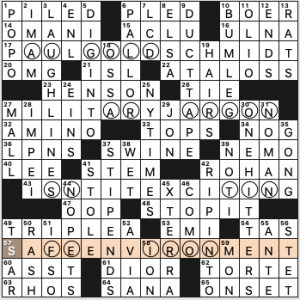 Theme: Four phrases of varying familiarity that contain both a 2-letter chemical symbol and the name of the corresponding element.

The fill felt like it was a lot of stale stuff PILED up. OMANI ULNA ISL NOG OOP RHOS SANA (more often transliterated as Sanaa, no?) TSAR ENL OSSA AVIA OLIO STET, with some of those crossing one another. Meh.

2.75 stars from me. Would really have appreciated smoother fill.

Welcome to Wednesday and a moderately challenging puzzle from Patrick Berry. As of yesterday, I am a year older than I was on Monday, so let’s see if I have acquired any new wisdom! …. nope, and in fact, I have very little to say about this puzzle, so I will say it quickly! 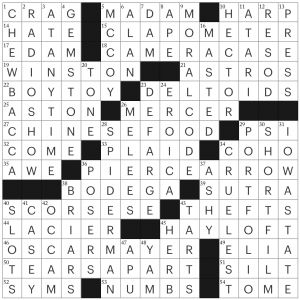 This puzzle contains a bunch of long/ish entries in a grid design pretty typical of New Yorker themelesses. These entries include :

None of these are *particularly* exciting, although it was interesting to learn that CHINESE FOOD takeout containers are call “oyster pails.” I’d never heard of PIERCE ARROW (or Packard or Peerless), so there was some guessing involved in the middle section, which I finished last.

Overall, a good number of stars for a clean grid, but I can’t say I was super excited by the solve! Sometimes that’s how it goes, even for Patrick Berry. See you on Friday! 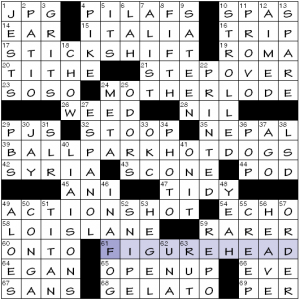 Cruel, yes. But not as cruel as blowing up a duck.

I figure this is a reasonable theme, and executed well. 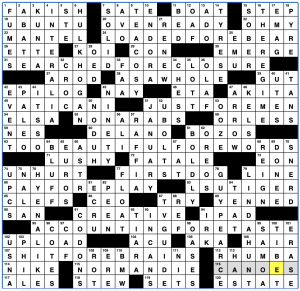 I can tell my crossword solving prowess must be improving because Byron Walden and I are consistently on different wavelengths and I still managed to get through this oversized AVCX grid from him in ~13 minutes instead of at least 20 like it used to.  This played a little harder for me than the 3.5/5 difficulty rating it was given, but your mileage may vary.  The title of this puzzle is “E for Effort” and that hints at what all of the theme answers here have in common:

I had figured out there was a “Phrases with FOR, but with an E added” theme going on, and jokingly thought about the prospect of “shit for brains” showing up, and then hit 80A and remembered this was the AVCX and not the NYT, so it was fair game.  Other phrases getting the same transformation include “loaded for bear”, “searched for closure”, “Just For Men”, “too beautiful for words”, “pay for play”, and “accounting for taste”.

“7” is off of Prince’s Love Symbol album, and if you look at the Love Symbol which appears in the lower corner of the video, you’ll see it does include an ARROW.

AS A WHOLE, this was pretty good.  There were some choices of fill I disagreed with (NORMANDIE?  Going with ASTR instead of ASTRO as a “Far-out STEM field?”), but this was pretty SOLID and I know that the way Byron clues tends to throw me off. 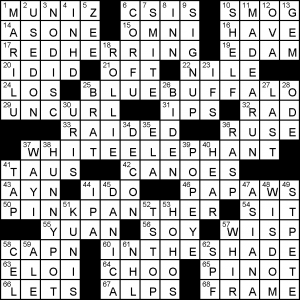 Colour-based puzzle themes are generally considered a cliche. Today’s puzzle is very tightly conceived though, and finishes on a clever, if loose, groaner. Four answers are in the form COLOUR:ANIMAL, but all four are not literal animals – and important degree of separation for a theme. They are found INTHESHADE since they each have a colour. Of the four, I know BLUEBUFFALO only from its terrible reputation amongst American veterinary professionals for being aggressively marketed but causing a disproportionate number of health issues.

Discussion: is two terrible I partials too many? I winced at IDID but WAYI made it a theme!