Our theme takes phrases that include a word starting with A followed by a double letter, removes one of those double letters, and splits the word into two. Got it? 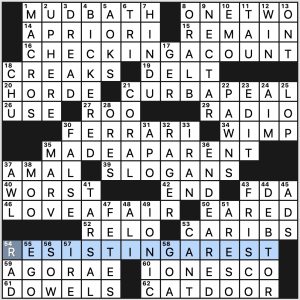 Overall, I like the wordplay here, but that middle one is filled with all kinds of issues, the least of which is that it seems to relish in its male perspective. Best to just not go there.

Starting the grid off with a MUDBATH is pleasant, and you might consider the ONE-TWO to be the TWO to MUDBATH’s ONE. A good start. Elsewhere, I feel like I’ve been seeing FERRARI a lot lately which isn’t necessarily a bad thing. However, FRISCO is considered a bad thing to most San Franciscans. It seems it’s a city that resists nicknames, though “City by the Bay” comes closest.

As I said above, good wordplay in this theme, but one entry is problematic in my view. Solid fill as well for the most part. 3.5 stars.

I get what Robyn Weintraub was going for here, even if the overall execution mostly left me wanting more: 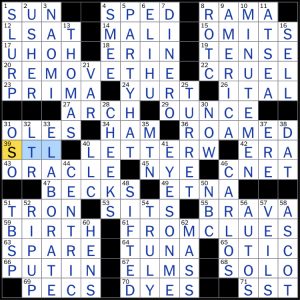 This is nothing new – plenty of puzzles have done a “remove [x] to have the clues make sense”, but it’s typically been on such a massive scale (every clue has said letter) that it’s truly an impressive solving feat. W as the applied letter is an interesting choice, but this is applied haphazardly enough that it was more annoying than challenging. Theres some great changes of cluing — “AWOL part” (WITHOUT???) turning into “AOL part” (ah, AMERICA actually fits) — amused me, but there were also clues like “Wedgy” that just don’t read right. W’s a tricky letter to secretly throw into clues, and it made this puzzle just okay as a result.

I loved this puzzle. The theme is tricky and the aha! moment was very satisfying. I actually said “ohhhh” out loud when I got it. The fill is also challenging. I suspect the response to this one will be bimodal – solvers will either hate it or love it.

I knew there was a rebus from the beginning, because 17a [Fast-growing youth sport] started with FLA and had to be FLAG FOOTBALL, which doesn’t fit. It crosses 18d [Midnight, in some scheduling apps], for which I had _AM. The blank needed to be 12, and the clue says “apps,” which suggests it’s not going to be Roman numerals but the actual digits. I finally realized that a FOOT is 12 INCHES, and INCHES makes 5d [Sews up] into CLINCHES. Ohhh! And wow. So 17a is FLAG 12 INCHES BALL.

Here are the other theme answers, with Peter’s grid because it shows the rebuses better than mine. You can click to embiggen. 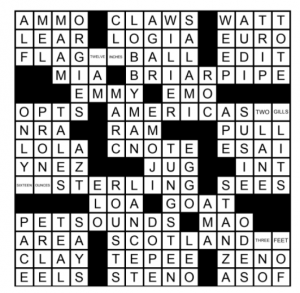 I think some people will hate this puzzle because the rebus crossings are challenging. If you don’t grok the theme and can’t work backwards from there, you’d have to know bridge and classic rock and infer the rural road reference. It helps that the first one has the easiest number clue. At least it helped me.

The only thing in the fill that made me roll my eyes was LOBBY MAN for 6d [Certain theater attendant]. I’ve never heard that in all my years of theater-going and behind-the-scenes work. It didn’t detract from my enjoyment because the theme was so good.

What I didn’t know before I did this puzzle: see above re: LOGIA. I also did not know that a muffuletta contains SALAMI (I did know that it’s a sandwich). 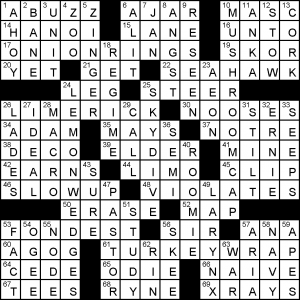 Today’s theme is somewhat similar in form to yesterday’s. Yesterday was COLOUR + ANIMAL, whereas today is FOODSTUFF + WORN ITEM. One difference, which makes this lean more to the harder end of the week, is that the answers are clued in a reimagined way, as worn items rather than food stuffs. So, for example, LEMONWEDGES are clued as shoes worn in a car rather than drinks (which are now illegal here) accompaniments.

The grid design, on the other hand, was more to the early end of the week. Partly, this is because of a rather conservative pinwheel design with two across and two down theme answers. As a rule, this makes for the most balanced filling with fewer forced answers. This, coupled with mainly one-word longer answers made the whole puzzle play quit easy. The most perplexing thing was [Perform a long jump?] for SKYDIVE. I guess?? High jump seems more apt though. 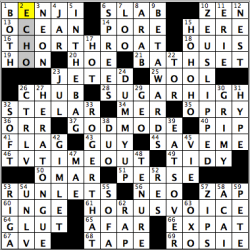 Good day, everyone! Welcome to Opening Day of the 2020 Major League Baseball season…in the middle of July, of course.

Today’s grid was one that dropped from the heavens, in the sense that puns were made from common phrases by taking one of the words in the phrases and replacing it with a similar-sounding word that happens to the name of a well-known deity. The entry smack dab in the middle, GOD MODE, a popular setting used by the video gamers amongst us, acts as the reveal (37A: [Invulnerability achieved by a cheat code…and an alternate title to this puzzle]).

The constructor’s note on the website stated that it was a little harder than usual for a Thursday, and I’d have to agree with that for the most part. Even with that, the long non-themed fill stood out in a real good way. Not sure which would be the pick of the littler, but I’m split between BET AWARDS (9D: [Prizes that Beyoncé has won the most of, 31]) and TV TIMEOUT, as I’m sure the abbreviation element to the phrases was a big part of liking it (46A: [Break in the program]). Can’t say that I ever got a SUGAR HIGH during nights out during Halloween, but I’m pretty sure I’ve gotten that a few times when I’ve snacked on too many cookies while covering sporting events in the press box (28A: [Buzz felt on Halloween]). Well, I don’t have to worry about that now since I have no idea when I’ll be in a press box with catered food again. Though that means more time on the SOFA and stuffing my face with snacks on there (55D: [Netflix and chill spot]).

“Sports will make you smarter” moment of the day: BENJI (15A: [Good Charlotte guitarist Madden]) – A very sad SWMYS, as we use this space to mention the 2012 ESPN documentary Benji, documenting the life and tragic death of high school basketball legend Ben Wilson. In 1984, Wilson was considered the top prep basketball in the country, starring at Simeon High School in Chicago’s South Side. On Nov. 20, 1984, Wilson and the mother of his young son were walking outside when Wilson accidentally bumped into two people. One of the people not with Wilson had a gun, and after a skirmish, Wilson was shot twice. Wilson was taken to the hospital — over an hour after he initially was wounded — where he passed away from his injuries the next day. (The gunman received a 40-year sentence while the other suspect got 30 years.) Wilson’s popularity in the city led to many carrying on his legacy on the court, as Wilson’s jersey number, 25, was eventually worn in the prep ranks by many future NBA players who hailed from the Chicago area, including Nick Anderson (a teammate of Wilson in high school), Juwan Howard, Derrick Rose, Jabari Parker and Kendrick Nunn.