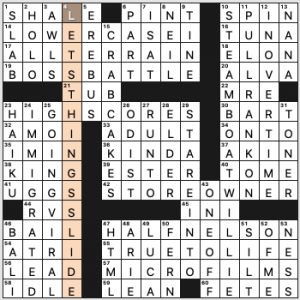 Definitely a gamer/tech vibe in this puzzle. There’s the Apple products’ LOWERCASE I, video game BOSS BATTLE, arcade game HIGH SCORES, a hacker saying “I’M IN,” online GOING VIRAL, and HTML. Contrast that with a smattering of old-school fill like ELON, ALVA, ESTER, ATRI, and ODIST, and assorted partial-ish entries (ON TO, IS AT, OF ME), and add in the weird grid design, and I dunno, it wasn’t all that fun for me.

3.5 stars from me. How’d you like working through this series of connected rectangles and squares?

On the 34526th day of quarantine, Taylor Swift blessed us with a surprise new album, and it is ?. Sometimes we can have nice things! Like this puzzle! (How was that for a transition??). I flew through this puzzle, which was packed full of entries I loved and some fun (easy) wordplay. 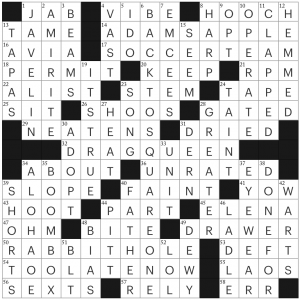 Long entries today include the vertical grid-spanner BACK TO SQUARE ONE, the NE stack of 10s ADAM’S APPLE / SOCCER TEAM, and the SW stack of RABBIT HOLE / TOO LATE NOW. All super solid and delightfully clued, particularly [Goal-oriented group?] for SOCCER TEAM and the A+ colloquial translation of [“That ship has sailed!”] for TOO LATE NOW!.

And now to justify my inclusion of this Taylor Swift video in my post, here’s a paragraph about it that uses entries from the puzzle:

This new album is very much my VIBE, it is GREATER than her previous albums, and once you start listening to it you will end up in a Taylor Swift RABBIT HOLE from which there may be no coming back. If you were hoping to avoid this album but already clicked play on the video below out of curiosity, it is TOO LATE NOW, you are DONE FOR. AMIRITE?!?

Overall, tons of stars from me. The fill is super clean, the clues are fun, and the entries are fun and flashy. Happy Friday! 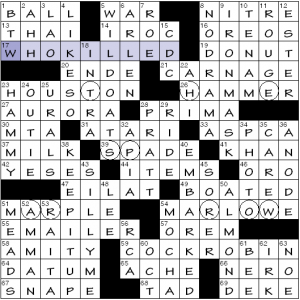 As instructed. the circled squares, read top-to-bottom and left-to-right, in those detectives’ names reveal the killer.

I hadn’t heard of—or more likely, long ago forgot—this particular nursery rhyme, but it’s reproduced in Wikipedia. Not much of a mystery, as the murderer confesses in the second line of the poem and there’s a litany of witnesses. This is obviously well before Poe and the conceit of the modern detective story.

There’s a 1935 Walt Disney Silly Symphony adaptation of the ‘story’ but I don’t recommended it, as it’s rife with racial, gender, and sexuality stereotypes, gratuitous police brutality, and gross miscarriage of justice. Also, not unexpectedly, it isn’t particularly entertaining per se.

Anyway, the theme reminded me of Jasper Fforde’s inventive books involving the Nursery Crime division of the police, with Jack Spratt and Mary, Mary (Quite Contrary) as lead investigators. The truly excruciating puns are a highlight—or lowlight, depending on your tolerance. And curiously, the center of the grid features (28d) Chris PRATT crossing Sam SPADE, suggesting a portmanteau strongly invoking (to me) that peculiar Spratt spelling.

Our theme is SPLIT LEVEL (69a, [Like some houses, and a hint to each set of stacked circled letters]), with supporting revealer STEPS (59d, [What this puzzle’s central black squares resemble]) and theme-adjacent FLOOR PLANS at 17a. Each set of split, circled letters spells out a synonym of the word “level.” 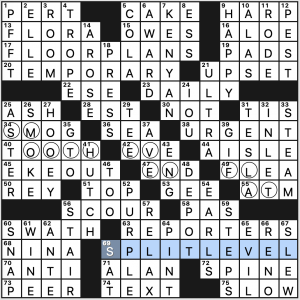 SMOOTH comes out of SMOG and TOOTH, EVEN from EVE and END, and FLAT from FLEA and ATM.

Nice concept here. I like how the circles step down from the left to the right of the grid, but it would have looked cleaner if five-letter words could’ve been used instead of EVEN and FLAT so those circled steps would seem unbroken.

Also, the circled words are synonyms of each other, and they’re all adjectives. I think I would’ve liked it better if each circled word used a different meaning of “level” which can be a noun (like “layer”), an adjective (like “flat”), or a verb (like “raze”).

Lastly, STAIR is at 56d and isn’t clued as part of the theme. I’m not sure why it wasn’t made into STAIN or STEIN.

But these are just ways to improve a solid concept which works just fine.

Fillwise, I think my favorite entry is HOOEY [Malarkey]. The longer TEMPORARY and REPORTERS are solid of course, as is the rest of the fill. In fact, it’s quite a clean grid. If ESS and ESE are the worst bits of fill in your puzzle, you’re doing all right.