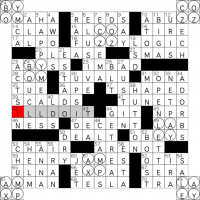 hello and welcome to episode #634 of matt gaffney’s weekly crossword contest, “Foursquare”. for this week 4 puzzle (but intended at week 3 difficulty), the instructions tell us that the answer is a four-letter adjective. okay. what are the theme answers? there aren’t obviously theme answers among the longest answers in the grid, but it’s clear something funky is happening at the corners, since an extra letter is needed outside the grid to fit in the correct answers to these clues:

so none of this was particularly difficult—all of those clues were straightforward, even if the extra letters were in some sense unchecked. but what about the meta answer? the extra letters outside the grid spell out YCOZAAPE in reading order, or YCZAEPAO in clockwise order. that doesn’t look helpful at all. but ah, what about the title? foursquare suggests looking at 2×2 squares—and indeed, a study of the grid finds that each of our corners, with three out of four squares filled in, exactly matches one 2×2 box within the rest of the grid:

taken in order, the four new corner letters spell BOXY, an apt four-letter adjective that’s the answer to the meta.

in an elegant touch, the four 2×2 boxes within the grid are symmetrically placed. that’s a nice capper to a very slick meta, quite unlike any mechanism i’ve seen before. it’s not terribly difficult—you can’t really help but put the extra letters outside the grid to fit the clues, and then once you’ve done that, the title pretty strongly hints at the next step—but it was original and fun. about the only thing i didn’t like about it was the reliance on not-great crossword answers ABUZZ and TRALA.