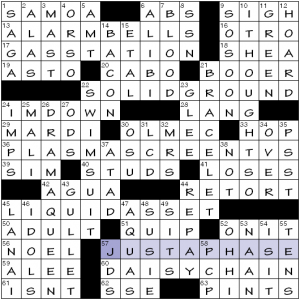 This is Eric’s debut puzzle. Nice start! I grokked the theme about halfway through and the revealer still made me smile.

What do these have in common? Check out 57a [The terrible twos, e.g. (one hopes!) … or the start of 17-, 22-, 36- or 45-Across?]: JUST A PHASE. This made me smile (and reminded me that I had a much harder time when my kid was three. Two happened to her. Three was on purpose). GAS, SOLID, PLASMA, and LIQUID are phases of matter. Fun! I look forward to seeing more from Eric.

What I didn’t know before I did this puzzle: that Timbuktu is in MALI. Anyone who has played me in Learned League knows that geography is a weak spot for me. 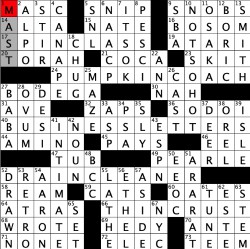 It’s good to see that my former constructing partner, Bruce Venzke, is up to his old collaborative tricks, this time with Gail Grabowski. Don’t quote me on this, but if Bruce handles his other collaborations as he did with me, then Gail’s top billing means that she came up with the theme on this one.

Speaking of the theme, 40A, BUSINESS LETTERS, tells us that it’s “Company correspondence…and a hint to the abbreviation hidden in 17-, 24-, 52-, and 66-Across.” That abbreviation would be INC, or “incorporated,” which is found in:

In a nice touch, INC is always split across the two theme words, rather than wholly contained in one word. I also enjoyed SPIN CLASS and THIN CRUST in particular, as they felt evocative and fun. (Even though I may get kicked out of Brooklyn for vastly preferring Chicago-style deep-dish to thin-crust.)

The fill is solid if unexciting. Exceptions: ATRA is feeling pretty stale these days, so pluralizing it at 64A is extra meh; on the positive side, I’m originally from Philadelphia, so I categorically have to enjoy any reference to Hall and OATES (60A). On the cluing side, how about we recognize HEDY Lamarr (69A) as an inventor and not just an actress? I did like seeing AARON (54D) clued as the composer Copland and not, say, baseball’s Aaron Judge or the Bible character. Nothing wrong with Aaron Judge, but I’ll never say no to more classical music in puzzles.

Theme: Phrases that start or end with letters that spell out a word that’s a synonym of “street.” 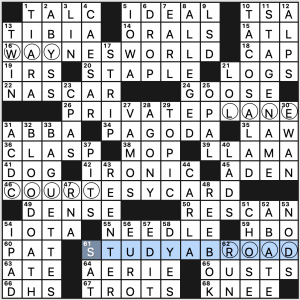 That works. I wouldn’t call the theme terribly exciting, but if it helps a solver get un-stuck, it’s doing its job. I like the construction here in that the side words alternate left, right, left, right. Ah, and now I see our constructor has gone to this well before with a “side dishes” theme. Cheeky!

Look at those lovely long Down entries: TACO SALAD, STAGE NAME, BLOOD OATH, and BAGUETTES. What a great foursome! And in stacked pairs no less. And there’s nary a price to pay except maybe DHS at 66a and crosswordesey ADEN at 45a. Well done. REENTER is not a word you’d ever highlight in a grid, but it gets a great clue [Come again?] that there’s no way you can fault it. (Unlike RESCAN which doesn’t quite get the same boost from its clue [Checkout correction].)

Quick write-up today! I really enjoyed this puzzle from Kameron Austin Collins. I particularly liked the central staircase of LEATHER DADDY / SCIENTOLOGIST / DOESN’T PAN OUT. It’s just fascinating to me what different publications will let you say! I bet myself a LONDON FOG that LEATHER DADDY has never run in a mainstream puzzle before, and the crosswordtracker database confirmed that I owe myself a LONDON FOG. I loveeee the entry, and it reminds me how lucky we all are to have the New Yorker running themeless puzzles. 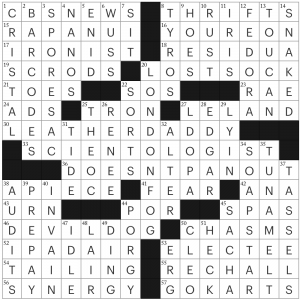 Overall, lots of stars from me. Here’s some Phantom Planet to kick off your week! 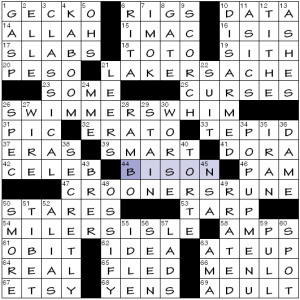 How to explain the mechanics of the theme? The title hints at its echolalic premise, but doesn’t—can’t—describe it fully.

Each theme answer comprises two words, the first a possessive ending in -ER’S and the second jettisoning that final syllable and also lopping off the consonant sound at the beginning of the word. This core is spelled significantly differently than in the first word.

Once again, it’s the sort of thing that’s easier to see instinctively than write out in words:

Feels suitable for a Monday because it’s engaging and relatively simple to grasp.