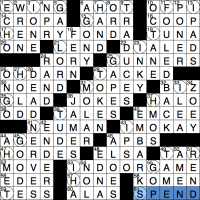 hello and welcome to episode #635 of matt gaffney’s weekly crossword contest, “Don’t Even Try”. for this week 5 puzzle, the instructions tell us that the answer is a seven-letter word. okay. what are the theme answers? i really don’t know. there are four ten-letter answers in the grid, arranged in a pinwheel pattern. i rather suspect that not all of theme are theme answers, but here they are:

the only thing that seems to be suggesting anything about the theme is the very last across clue: {Devote, as time looking at clues} SPEND. this ought to be matt’s way of suggesting that the meta mechanism is (at least partially) in the clues. that and the title are really are i’ve got to go on, as nothing about the rest of the grid suggests a theme. maybe it matters that each of the four 10s is a two-word phrase or name, but maybe it doesn’t.

okay, back to odd-numbered letters in the grid. oho, what do we have here? the letters in odd-numbered squares spell out EIGHT FIGHT LIGHT MIGHT NIGHT RIGHTS. that surely means something. it’s most, but not all, of the common _IGHT words in the english language, in alphabetical order. SIGHT and TIGHT are missing (unless the final S is supposed to stand for SIGHT?), and less commonly BIGHT and WIGHT. hmm.

well, back to the clues, then. there aren’t any _IGHT words in the clues, but it definitely seems like some of the clues are a little weird, as if there were an extra forced constraint. why does {Dallas-based non-profit Susan G. ___ for the Cure} KOMEN start with “dallas-based”? why is {Legendary pitcher Perry} GAYLORD “legendary”? why does {Oilman Jock of TV} EWING use jock (j.r.’s dad from dallas) instead of j.r. himself, or any of the other EWINGs? hmm, now that i think about it, there may be a dallas connection here—or maybe all of this is irrelevant.

what is there in the clues that relates to _IGHT? well, {Circle that glows} HALO suggests LIGHT, and {“Invisibilia” airer} NPR connotes a (lack of) SIGHT. i can’t really find others, though. maybe “day”, which occurs in both {Activity for a rainy day} INDOOR GAME and {“What a sad day!”} ALAS, suggests NIGHT? i dunno. there aren’t really others like that, though.

i’m just about out of time, and although i feel like i might be close, i don’t have it yet. i’m going to guess a seven-letter word that i can spell from the letters EFLMNRS. NEMESES seems like one that might have nudged matt towards the puzzle title, so let’s go with that.

somebody please let me know in the comments what i missed.