Now this is more of what I like to see in a Thursday, some really tough trickery!

There’s some TELEPORTING (59a, [Futuristic travel method (which explains how the last words of the theme answers got there]) going on between the main theme entries. Each one has the word DOOR in it, but on the other side of that door is a word that belongs in one of the other theme entries. What’s left in the grid are the results of horrific transporter malfunctions. Oh, and did I mention that the DOORs are all rebussed into single squares? They are. 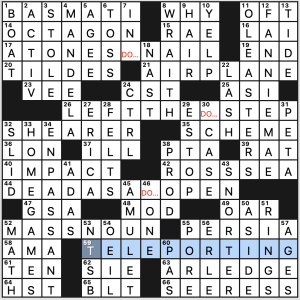 It’s impressive that Paul found phrases that each have a four-letter word after DOOR and that he could get everything to fit symmetrically. Nicely done in that department.

Now, yes, when I think of teleportation I think of Star Trek where teleportation has nothing to do with doors. But there are plenty of examples in sci-fi and fantasy where a character passes through a door to go to another land or place. The one sticking out in my mind is the video game Portal (specifically, Portal 2) in which the player has to negotiate teleporting portals in order to avoid traps and solve puzzles (highly recommended). 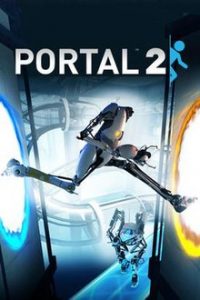 Back to this puzzle. As you can imagine, the theme was difficult to suss out and threatened to leave me frustrated (see my god-awful solve time). Because of that, I think the rest of the fill and cluing needed to be a tad easier than the usual Thursday.

There are a number of stinkers in the fill starting with the theme-crossing DOOR CASE and Let’s Make a Deal‘s DOOR ONE (I’ve only ever heard “door number one”). And then there’s GSA, LAI, AS I, ESTOP, PAS, SHEARER (not clued as Harry), SNORTER, ADAS, OEIL, SIE, a phrase I’d never heard (MASS NOUN) and two long answers at the very edges of my memory (OLEASTERS and EN PASSANT).

I don’t see a need for all this kludgy fill. The stacked nines in the NE and SW corners could be reduced to one in each corner, and while starting off the grid with BASMATI and OCTAGON looks great, the stacked sevens only add more constraints to the fill. I’d much rather see a cleaner grid giving the solver a fairer chance at uncovering and enjoying the theme. I did like MANDELA, FANNIE MAE, and HOME GAMES though.

Cluing is filled with ambiguities which is par for the course on a Thursday, but as I said, the puzzle would have been better served if these were toned down a notch.

The theme is great. I love it. But when you’re fighting to grok it and trying to put things in order, to have to contend with so much junk in the fill and heavily ambiguous cluing, it’s a lot harder to enjoy a fun, imaginative theme. 3.3 stars.

After having A Bad Time with last Thursday’s NYT puzzle, this week’s was bound to be a step up.  Derek Allen and Jeff Chen have cooked up a grid with some GRAY/AREAS, as 28D and 32D spell out.  Each of the (gray) shaded squares in the grid has a mixture of BLACK and WHITE happening within: 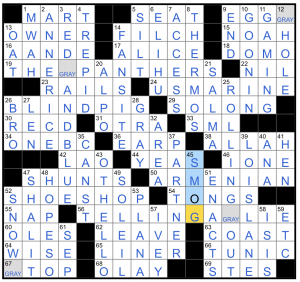 It’s fun (though the app switching things over to GRAY at the end was a little annoying for screenshotting purposes), though some of these phrases feel “off” to me.  I kept trying to throw the word “little” with WHITE LIE, since that’s so often the phrase. Similarly, I can make the mental leap to get from “Old Glory” to RED WHITE AND BLUE, but it also feels like I’m missing a step. that a different clue would provide.

Minor gripes aside, this had some nice moments – “DC Reporter” as a clue for LOIS LANE felt particularly clever. 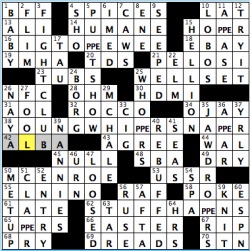 Good day, everybody! Hope all are well and that you are continuing to stay safe.

We have a timely theme and a rebus in today’s puzzle, with intersecting answers sharing the letters PPE, which are all squeezed into one box. Of course, PPE, short for personal protective equipment, has been in the news throughout the spring and summer as we hope all of the people on the front lines of fighting COVID-19 have all of the PPE needed in plentiful supply, which clearly was not the case not too long ago and still continues to plague many essential workers in hospitals.

Before talking about the tricky portion of the puzzle in the middle of the left side, totally want to acknowledge the untimely and tragic passing of NAYA Rivera, whom I never really got to see perform in her acting roles on television, but, from what I have read, was very talented (26D: [Actress Rivera of “Glee”]). And to know that she passed soon after saving her son from drowning is even more heart-wrenching. Rest in power, Naya.

The last part of the grid that fell included the area that included NFC, where I totally wished for a football reference than wireless technology (26A: [Like contactless payments: Abbr.]). The intersection with FLIM (2D: [First half of a con game]), one-half of flim-flam, and YMHA could have been tricky, especially the latter being an abbreviation that I have not yet fully put to memory (19A: [Jewish youth grp.]). Not a huge movie buff, but liked seeing two movies that I have seen in today’s grid feature, with Big Top Pee-wee crossing the nice fill of FIGHT CLUB (1999 movie with the tagline, “Mischief. Mayhem. Soap.]). Along with those entries, AOL also took me down memory lane, back when I tried to have the longest buddy list in my circle of friends when we were all using Instant Messenger in college (33A: [Buddy List company]). There’s an obvious sports reference in tennis legend MCENROE (50A: [1984 Wimbledon winner]) right on top of EL NIÑO, which is the nickname of one-time golfing phenom Sergio Garcia (55A: [Meteorological disrupter]), but the next paragraph will talk a little bit more about the Woonsocket Rocket…

“Sports will make you smarter” moment of the day: ROCCO (32A: [Twins manager Baldelli]) – Drawing comparisons to Joe DiMaggio, another fast centerfielder of Italian heritage who wore No. 5, a lot was expected from former Major League Baseball player Rocco Baldelli when he came up through the Tampa Bay [Devil] Rays system and made it to the bigs in 2003. He showed flashes of that brilliance, but numerous injuries, caused by a mitochondrial channelopathy disorder, did not allow Baldelli to go full seasons in which he did not develop some type of muscle injury. Baldelli was named the manager of the Minnesota Twins after the 2018 season, then led the Twins to the 2019 AL Central Division title. Baldelli was named AL Manager of the Year. 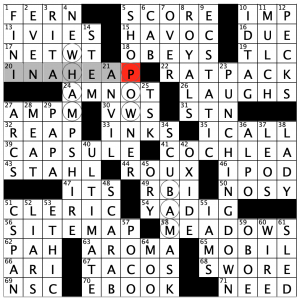 A standing complaint I’ve had with Universal puzzles is that when it comes to circled letters, they are not able to provide them in their widely published format. Only here, in .puz format made for this site. I have always been befuddled as to why they were willing to provide two different experiences, but while today is no different in that respect, I have great news! I have been assured that Andrews McMeel is aware of the problem, has recognized it as a problem, and is working towards a fix. Hope that fix comes soon, because Universal runs a lot of themes that are better presented with circles.

Today’s puzzle is a hidden word theme with “punch” sounds. I like this theme type just fine as long as the hidden word bridges the words in the theme (check!) and all the phrases are familiar. I’m not sure about the latter… PUNCHING DOWN is not a phrase I’m familiar with, but according to Google, I should be. But SHOP OWNER and SCUBA MASK both feel a bit vague as stand-alone phrases.

Fill was mostly fine- favorite clue was 5A [“Success!”] SCORE! That’s a fun way to clue that.

Coulda done without PAH, ARI, and NSC in the SW. ORY is quite the stretch as fill too.

Looking forward to the introduction of circles in Universal grids! 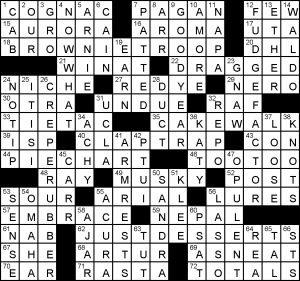 Today’s revealer is wrong! But deliberately so, with five answers with inedible desserts: a BROWNIETROOP, FUDGEFACTOR, CREPERUBBER, CAKEWALK and PIECHART. The inedible nature of the answers is for me a key indication of the care that has been put into assembling the puzzle. A degree of separation makes the revelation all the sweeter. I’m not sure all of these would be always a dessert here, with some being served with tea or as a savoury, but they can definitely all be a dessert!