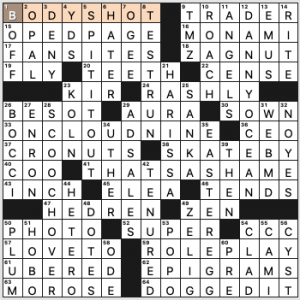 Did this one feel Saturday-hard to you, too, or am I just having an off night? Couple people on Twitter also had to fight through it.

There are some nice stacks here. BODY SHOT (which is liquor that’s drunk off someone else’s abdomen, and I don’t remember how that’s supposed to work) and FAN SITES, plus ROLE PLAY and DOGGED IT. My favorite entry is the colloquial “SCOOCH OVER,” and spoken “SPIT IT OUT” and pop culture DANNY OCEAN are cool, too. EASTER EGG is clued as the video game (etc.) extra, a [Bonus feature, of a sort]. And after that other puzzle some months back had terrible (to me) fill where the editors changed something from HARISSA, the [Spicy condiment from North Africa] that the editors felt was too obscure—well, it’s nice to see the word from that spice bottle in my kitchen in the puzzle. Also nice: ZAGNUT, ON CLOUD NINE, “THAT’S A SHAME,” UBERED as a verb.

I did cringe a little at some of the putty holding these entries together—ELEA, CCC, and OGEE in particular.

It’s a Wyna Friday! I can’t imagine a better way to ease into the weekend than with this SPUNKy puzzle, a cup of coffee, and a SALT BAGEL. I only have 2 of the 3, but I think I can remedy that by tomorrow. 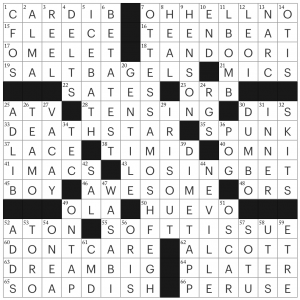 We’ve got a long central down of  OTTESSA MOSHEFEGH, who is not an author I was previously familiar with and whose last name especially is difficult to guess at. Wyna makes this name work beautifully with all fair crossing, although the proximity of MOSHEFEGH and IRIS OUT – a bit of fill that I can never remember properly and don’t particularly enjoy – made the middle section the most challenging part of the puzzle for me. Other excellent medium-length stuff includes SALT BAGELS / SOFT TISSUE / DEATH STAR / LOSING BET / OH HELL NO / TEEN BEAT / TANDOORI / DON’T CARE / DREAM BIG / SOAP DISH. That’s a lot of sparkly 8-9 letter stuff!

Overall, a joy to solve. Many stars from me! Happy weekend, all. 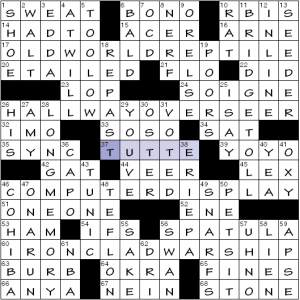 Okay, no denying that some of those are a little stilted (‘overseer’) or feel as if they should be more specific (‘lizard’ in place of ‘reptile’), but they sound good enough and are impressive in context, so it’s very easy to judge them on a curve. And even though they

Oh, you all remember your Civil War battles, right? The Monitor and the Merrimac? Famous for being the first clash of ironclad sea vessels? 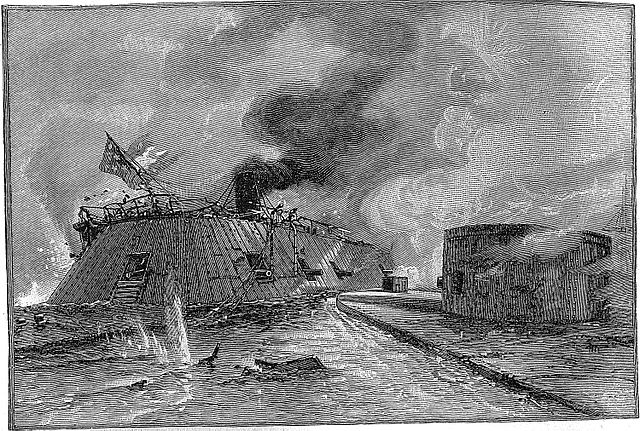 Also from Wikipedia, this, about monitor lizards:

The generic name Varanus is derived from the Arabic word waral/waran ورن/ورل, from a common Semitic root ouran, waran, or waral, meaning ‘dragon’ or ‘lizard beast’.

In English, they are known as ‘monitors’ or ‘monitor lizards’. The earlier term “monitory lizard” became rare by about 1920. The name may have been suggested by the occasional habit of varanids to stand on their two hind legs and to appear to ‘monitor’, or perhaps from their supposed habit of ‘warning persons of the approach of venomous animals’.

There are citations provided for these claims.

All the blazing difficulty that has of late been missing from the Fireball is here! This is a good thing (and a reminder that women can and do make very good, very hard puzzles, in case anyone who edits an indie crossword might need to be reminded).

Crossword difficulty mostly depends on the cluing. Anyone who has been to ACPT (or most any other tournament) knows that the same grid can be clued very differently. Sure, an entry you don’t know will be tougher than one you do know no matter how it’s clued (my issue with 7d in today’s New Yorker puzzle). That’s not the same as a puzzle deliberately clued to be harder to solve, like this one. The Inkubator team said this would be “very challenging,” and they nailed it. I loved this puzzle. 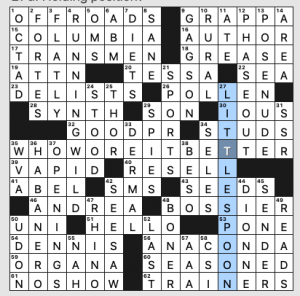 Other things of note:

What I didn’t know before I did this puzzle: see above re: Kye Allums. I also never saw “Zootopia” so I didn’t know Officer McHorn was a RHINO. And I’d never heard of ANDREA Gibson. Here’s “To the Men Catcalling My Girlfriend While I’m Walking Beside Her.” She does not mince words.

Theme: Famous Hollywood types with last names that are words associated with golf. 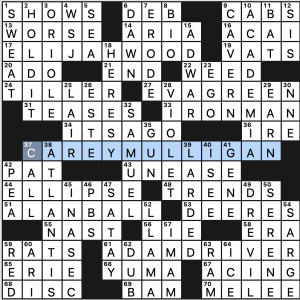 What, no JEREMY IRONS? I guess the plural ruins the consistency. However, there is IRON MAN prominently displayed at 33a. I’m really surprised this was allowed to stay because it was distracting once I grokked the theme. True, it doesn’t follow the same pattern, but it’s a golf term in the title of a big-budget Hollywood film, so maybe you can forgive me for giving it a second or third glance.

But I do like the theme. It’s tightly-defined and consistent.