If Brooke and Sid’s NYT puzzle (or their various indie/blog puzzles) leave you hankering for more of their creations, you are in luck! Next weekend—1 to 7 pm (Eastern) on Saturday, August 15—the online Lollapuzzoola crossword tournament will include puzzles from Sid and Brooke, along with other delightful constructors (Robyn Weintraub! Plus Team Fiend’s Joon Pahk, Stella Zawistowski, and Rachel Fabi!). Registration is $20, with some of the proceeds going to good causes. Details here. 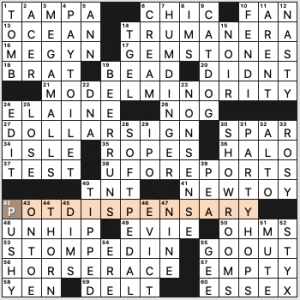 What a fun and fresh themeless! It played like a rather breezy Friday puzzle for me. It helped that 1a. [Seat of Hillsborough County, with a population of 400,000+] was a gimme for me—a TAMPA friend of mine is a teacher for the Hillsborough public schools, and that is the only reason I knew this. Thanks, Jenna!

So much cool fill here. We’ve got the “MODEL MINORITY” trope, a POT DISPENSARY (not sure if the clue is accurate—[Joint that sells joints]? Do they sell rolled cigarettes, or just a bag of loose herb?), a PAY TOILET, BEER RUNS, quaint HUMDINGER, SOFT-PEDAL, CATDOG, and PARTY-HOPS.

There is absolutely no woeful fill in this grid. It’s a treat!

Did not know: 5d. [___ Petry, first female African-American writer with a million-selling novel (“The Street”)], ANN. Here’s an article about her from the Harvard Magazine. 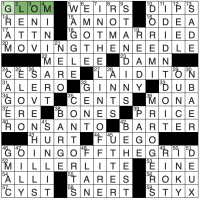 My good buddy Peter Collins has today’s LAT themeless challenger! I found this a tad tougher than normal Saturday LAT puzzles, but I think my brain is broken this week. I am gunning for a nap today!

That is all for now! Enjoy this song that will now be stuck in your head for the rest of the day! 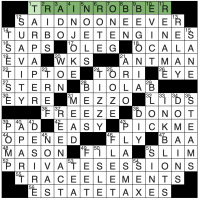 So maybe I am tired. It has been a busy week, and I just learned that it’s going to be crazy busy for the next two months as my job is undergoing a major procedural change. All of these excuses are to try and explain why it took me nearly an hour to finish this puzzle! I had my wife helping me, had the dictionary open, you name it. I was not frustrated or angry, as I may or may not have been for previous Stumpers, but this one was brutally hard. Usually after solving all of the clues make sense; there are a few in here I still don’t understand. I will plead for help in the comments, and I will for sure be checking this spot later today for some explanations! 4.8 stars for one of the hardest Stumpers I have done in a while!

It is definitely time for a nap! Have a safe and healthy weekend! 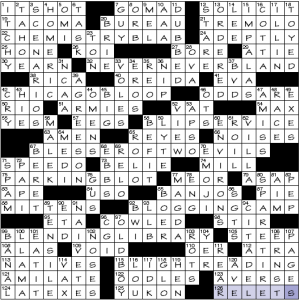 Just a simple add-a-letter theme. In this instance, it’s a B added to the beginning of a word in a familiar phrase, for suitably wacky results.

Note also that the added Bs are the only instances of those letters in the theme answers, though there are a number of them in the ballast fill.

And on that cheerful note, I’ll close the book on this one.

THEME: Synonyms for “Leader” are at the heads of common phrases. 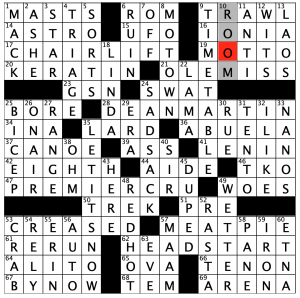 Enjoyable offering from Mr. Stillman today! Right over-the-plate type of theme. In this type, I think it’s important for the words to have a completely separate meaning than the word the revealer points to, and for CHAIR and DEAN it certainly does that. PREMIER in both senses feels like it’s akin to something “important.” No big deal though.

I think the clue for 42A [Short kind of note in music] is inelegant or just plain wrong. Eighth notes may be short, but it’s all relative. There are plenty of second movements in Beethoven sonatas where the eight note is not at all fast.

Enjoyed the SAD SACK / ASS crossing. Poor guy. A little trickiness in the NE with IONIA and MOTTO (I thought “Eureka” was referring to the Californian city) that’s the area I filled in last.