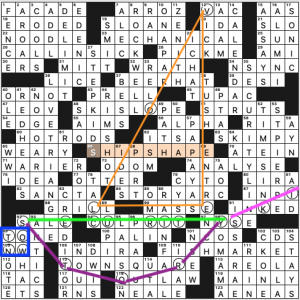 Okay, let’s see if I can make sense of the after-the-fact/after-the-solve theme. The revealer is 66a. [In perfect order … or, as two words, what’s formed by applying the answers for the five starred clues to the circled letters], SHIP-SHAPE. The other themers are:

Do we accept “that’s a sailboat” as a visual rendering of a SHIP SHAPE? I feel like sailboat ≠ ship.

The themers are short and few, with just 59 theme squares in those entries (supplemented by the circled letters, which are pretty much anchored to their grid locations to allow the boat picture to fit. TOWN SQUARE appears opposite MECHANICAL, but that’s just a random entry and not a symmetrical theme partner.

Overall, I did not enjoy the theme at all. Spending 20 minutes annotating a screenshot with lines is not remotely fun for your blogger! There wasn’t a ton of juicy fill to make up for this, either (and there’s debris like INRI OMRI NSEW UTA SMIT), so I’m pretty much going thumbs-down on this connect-the-dots puzzle. A smattering of random things (STAYS, PORT, WWI, ERODED, PATH, etc.) have boat- or sea-related clues, but given that you don’t necessarily see what the theme is till after you’ve finished the puzzle, they don’t add much value.

2.25 stars from me. Just a weird solving experience overall. And I’ve seldom valued the appearance of nauticalese in crosswords (it feels exclusionary to me), so this one’s not for me.

This was fun! The theme answers are mash-ups of rock bands and common phrases. The bands are first – thus the title. 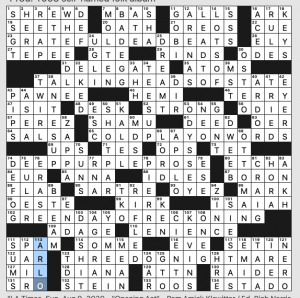 All the theme entries are solid, and each answer was amusing. Figuring out the theme early on added to the fun for me. Nice!

What I didn’t know before I did this puzzle: that TERRY Crews is on “America’s Got Talent.” Never watched it, and to be honest, I had to look up who he is.

THEME: The word IT is substituted with another two-letter word (which can fill in the phrase IT’S ??) in common phrases to create wacky phrases. 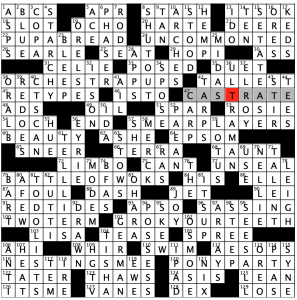 For some reason I started this puzzle in the SE, and found PONY PARTY. I clearly saw what was going on and figured the whole puzzle would be based around IT’S ON. To my surprise (and delight) it wasn’t just ON! OK, UP and ME joined too!

I love this concept, but I must say I feel like I may have enjoyed it more if it stuck to four solid themers rather than eight. That might feel like too few, but some of the fill felt like more of a grind than usual and, while some of the themers landed very solidly (PONY PARTY, PUPA BREAD, BATTLE OF WOKS) others did not (UNCOMMON TED from the single-word UNCOMMITTED, SMEAR PLAYERS from SITAR PLAYERS, which doesn’t strike me as an in-language phrase, NESTING SMEE from NESTING SITE). 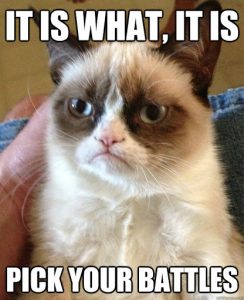 I pick The Battle of Woks!

Don’t get me wrong, I enjoyed this, but I felt myself getting weaker rather than stronger after I figured out what was going on. At over 18 minutes, my time reflects that. I’m usually in the 11-13 minute range with the WaPo.

Fun trivia: [Like Margo Dydek, among all WNBA pros so far] TALLEST.

Long quote: [“The ___ of a living thing is not the atoms that go into it, but the way those atoms are put together”: Carl Sagan] BEAUTY.

Misdirection (for me anyway): [Task guides] TO DO LISTS. (I was thinking, like, guides as in the SHERPA).

Also, one more post-solve note I received was this from Evan:

The letter strings IT, ME, ON, OK, and UP aren’t anywhere in the grid except in the theme answers and revealers.

I should’ve realized sooner. As always, the construction and effort is meticulous. A bit more exhausting for me than usual today!

Great title for this one. In fact, I entered DANCE for 1-Across since I mistakingly read the title as the first clue. How apt!

THEME: Types of dances are jumbled in common phrases. 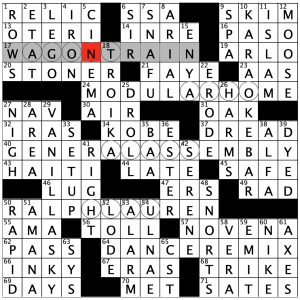 I’ll start with my usual complaint about circled letters in the Universal puzzle (which I’ll copy/paste from a recent post). I know it may get tiresome, but I think it’s important to consistently point out that Universal is offering two different solve experiences, one of which is far less visual and is much more likely to be solved by a novice solver. However, there is a silver lining!

A standing complaint I’ve had with Universal puzzles is that when it comes to circled letters, they are not able to provide them in their widely published format. Only here, in .puz format made for this site. I have always been befuddled as to why they were willing to provide two different experiences, but while today is no different in that respect, I have great news! I have been assured that Andrews McMeel is aware of the problem, has recognized it as a problem, and is working towards a fix. Hope that fix comes soon, because Universal runs a lot of themes that are better presented with circles.

It’s not here yet, so today solvers of the widely published format are asked to count and circle their own letters before unscrambling them.

As far as the puzzle itself, it was fun to get to the revealer and figure out what I was trying to unscramble! The only word I was able to unscramble prior to uncovering the revealer was HAUL (which I later determined was actually HULA!).

All common in-language phrases, all common dances, and the mixed word bridges words in the phrase. That’s all you can ask for in this theme type!

Well, that and a strong revealer, which in this case is DANCE REMIX… I suppose the hidden dances were mixed, and mixed again? How are we to know!

Anyway 3.5 stars with circles and 1.2 stars without.

Theme: Common questions, whether rhetorical or from famous works, are clued via their literal answers. It feels like a Jeopardy/crossword mashup. 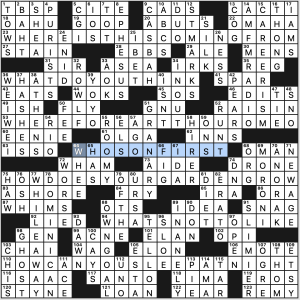 Not bad. What I like most about this themeset is the sheer number of common questions that are 21-letter grid spanners. You don’t often see grid spanners in 21x grids, and to have four of them here and all of them fun ones, well, that’s worthy of a couple stars right there.

The long fill is solid: AM/FM RADIO, CAREERISM, WHILE AWAY, DOMINICAN, ST MARKS, OWN GOAL, PURISTS, EPHESUS, CASBAH, and ROWLF the Muppet dog. In the new-to-me category we find MORONI [Angel whom Mormons believe visited Joseph Smith] and WEIWEI [Artist and activist Ai] who has been critical not only of the communist party in China but of the West as well. I’m glad to learn about him.

A pleasantly fun and quick solve. Four stars from me.