I smiled when I saw Lynn’s name on the NYT website, and I smiled when I did the puzzle. Lynn’s Monday puzzles are always perfectly pitched – accessible, smooth, and fun. I couldn’t figure out what the theme was until I got to the revealer.

What I didn’t know before I did this puzzle: it’s Monday, and Lynn doesn’t do obscurities, so I got nothing. 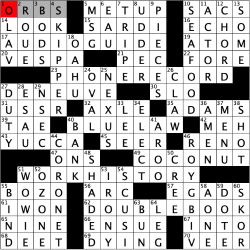 I always perk up when I see a byline from this husband-and-wife team — I expect to see some fun fill, and this puzzle didn’t disappoint. It’s a Monday, so there aren’t too many opportunities for the unusual, but they still managed to get in the divine Catherine DENEUVE at 27A (my husband and I recently watched The Umbrellas of Cherbourg for the first time and capital-L Loved it) and ‘SCUSI at 54D (fun memories of trips to Italy! oh, to be able to travel!). Plus, there are fun clues for old standbys, like LEE (33D) clued as the character from His Dark Materials and DYING (69A) as “Flopping at a comedy club” instead of far less pleasant associations for either.

On to the theme! The revealer at 62A, DOUBLE BOOK [“Reserve twice in error, as an airline seat…or a hint to the two-part answers to starred clues”], tells us that each theme entry consists of two words that can each, individually, precede the word BOOK to form a common phrase. The revealer clue is a bit clunky, but I suppose on Monday, greater clarity for beginning solvers might be worth having all those extra words. So, we’ve got: 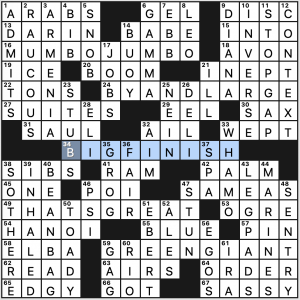 Probably not an original theme; I bet I could find similar puzzles if I went looking. But what matters is how well this one’s put together. Let’s take a look.

A nine-letter central entry isn’t the easiest thing to work with because it means your corners are either going to be big or chopped up into little pieces. ZB uses a “cheater square” to help alleviate matters and make her hefty corners fillable. She even manages to throw in a few goodies like RAUCOUS, ARMENIA, STOPGAP, “SO THERE!,” BEANBAG, and MARINES.  TOADY is another fun entry you’d think you’d see more of, but I don’t recall doing so. I’m not so sure about LEG PADS, but I’m not a hockey fan. Do they use pads that cover the whole leg and not just the shins?

Clean and smooth Monday grid. A breezy start to the week. Four stars.

HELLO GOOD MORNING did you have a good weekend welcome back to the real world where we have a triple stack from Elizabeth C. Gorski to kick off the week!!!!!!!

[Alternative opening line: A triple stack? In this economy!?!] 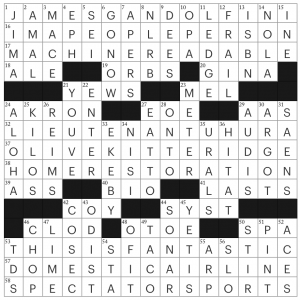 It’s no secret that I have pretty low tolerance for bad fill, but those sorts of qualms go RIGHT out the window for a triple stack. I unapologetically love this sort of puzzle, and what we have here is just a perfect example of why. Constructing a beast of a puzzle like this requires the world’s tightest, most 15-flush wordlist known to humankind. A full 2/3 of the 15s in this puzzle are new to crossworld, at least according to crossword tracker: JAMES GANDOLFINI, I’M A PEOPLE PERSON, LIEUTENANT UHURA, OLIVE KITTERIDGE (presumably the seed entry), HOME RESTORATION, and THIS IS FANTASTIC are all debuts. MACHINE READABLE, DOMESTIC AIRLINE, and SPECTATOR SPORTS have been in puzzles before, but MY GOD. What a feat! And look at that grid! It’s so friggin cool!

Like I said, I’m not going to spend too much time concerned about fill here. Is there some stuff I wouldn’t want to see in a normal themeless? Absolutely. Does it bother me in the slightest in the context of this masterpiece? No the EPH it does not. And of course, if *every* themeless puzzle were a triple stack with rougher-than-average fill, this might get old fast. But this is the first of its kind that I’ve seen in the New Yorker, and I am a sucker for the novelty and construction.

I mean, what else is there to say? I’m so happy that this challenging puzzle opened the week, and I have so many stars for it. 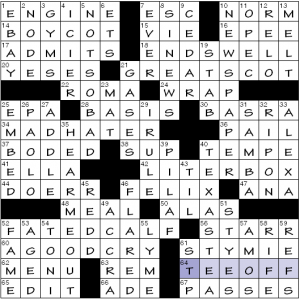 Cute but nothing spectacular. Pretty much what’s expected of a Monday crossword.

So it turns out the phrase “spill the t[ea]” derives from (Black) drag culture, as discussed over at m-w.com.