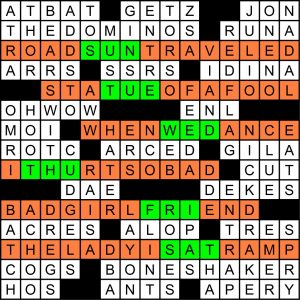 Title: “Playlist Omission”
Prompt: The meta for this puzzle is the Bruce Springsteen hit that completes the puzzle’s playlist.
Answer: I’M ON FIRE

259 correct with a half-hour left to play, which isn’t really that many. I got it quickly, but after missing last month’s in spectacularly silly fashion I’m in no position to crow.

Some of the difficulty this month probably stems from the surprising fact that “only” six of the eight (!) 10-plus-letter acrosses are actually theme. THE DOMINOS and BONE SHAKER are just really long fill traveling in the same direction as the true 78 (!) letters of theme. So don’t feel too bad if that tripped you up, and they’re unusual but not technically breaking any written or unwritten rules since they’re shorter than the six theme entries, so in fact a tip of the hat to Pete for a clever dose of squid ink on those two might be in order.

Anyway, those six themers conceal six members of a familiar group of seven:

If you have not heard of all of those songs (and indeed acts), then you and I have something in common. But we’re here to learn, and, as the saying goes, they were all gettable from the crosses. How about TWAGFITCH as a short form for “they were all gettable from the crosses”? I give that a 5% chance of catching on. “I had never heard of LAKE EOLA, but TWAGFITCH so it’s all good.” OK, 3% chance.

Anyway, all of these conceal the three-letter abbreviation for a day of the week, and they’re in order. The missing one is MONday, suggesting the contest answer.

I do like the Chromatics’ switch of “skull” in favor of “soul” on the lyrics (“…and cut a six-inch valley through the middle of my skull/soul”). It made so much sense that I wondered if I’d been hearing it wrong lo these many years. But no, it really is “skull” in the original version.

Stunningly wide-open grid from our meta-maestro this month, especially considering the large amount of theme (and the constraint that they had to be in chronological order). Just to show off he even lobbed in RED FLAG, BEARS WITH, and NICK DRAKE on the downs. OHWOW, that’s pretty SPRY and you’d have to be a CLUE-less HATER to dislike it.

4.35 stars. Theme is good, but the grid is really nifty. Until September.