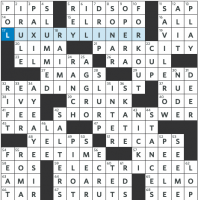 This week, we’re looking for a six-letter word. We have six themers, so it’s quite likely that each one contributes a letter:

Let’s see, each one is two words, and the first words all belong to a familiar set — they’re spaces on a Monopoly board:

I noticed the first step pretty quickly, but was stumped for a few minutes trying to extract the rest — until I thought about the title: “Let’s Move Beyond It.” In Monopoly, one part of gameplay is passing — moving beyond — the Go space, and collecting one’s $200. What would we find if we moved beyond each of these spaces?

Those six spaces spell out BLOCKS, which is a six-letter word, and I guess blocks are things that are in cities, and the Monopoly board is based on a city (Atlantic City, NJ), so, sure.

In a world where there are movies based on board games such as Clue, Battleship, and Ouija (three movies based on Ouija! but is that, like, really a game tho?), take a chance on the upcoming film based on Monopoly that passed Go last year.