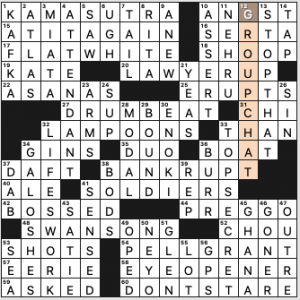 It’s always cool to see a name I recognize from the Crossword Puzzle Collaboration Directory pop up in a puzzle byline! Mr. Yoon impressed me with his modified “Bechdel test” approach to vetting his own puzzles to make sure he’s not perpetuating the overrepresentation of the straight white male contingent.

What else? Six things:

Nothing to dislike in this puzzle. 4.25 stars from me. Keep ’em coming, Nam! 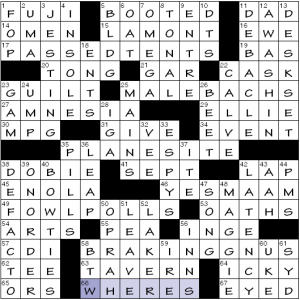 Second write-up in a row where I’m seemingly not grasping the entire theme. This one seems to be just puns, but I can’t find a major point of cohesion in either content or mechanism.

Best I can do is note that each entry is a two-word phrase and in all instances both are replaced by homophones. It doesn’t feel like enough.

Pretty good crossword, despite the foul-up and the meager theme. 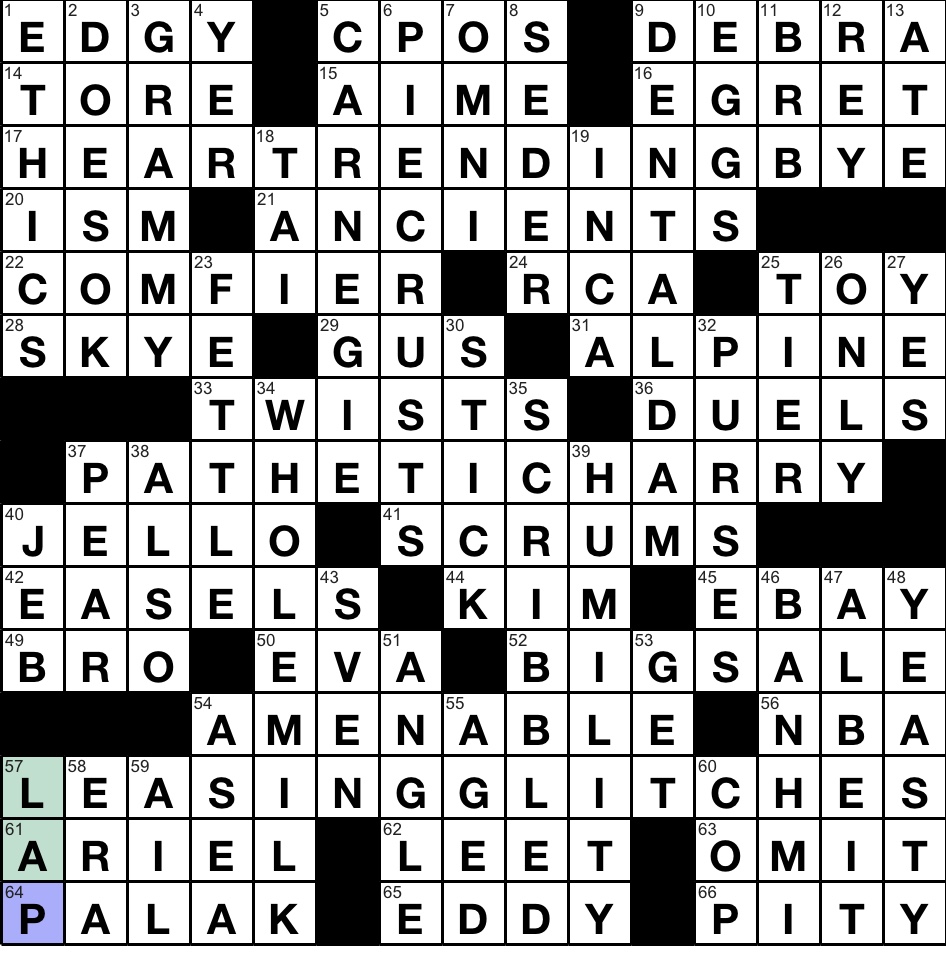 Fun puzzle today – with anagrams taking a cluing style that reminded me of crypitcs, using Screw/Smash/Break to indicate that we should anagram – and added alternative wacky clues. It took me longer than I care to admit to see the anagrams – I think having the word ‘the’ included in them threw me off a little bit, but these are fantastic answers and both of the clues for each are fantastic. Of the three, my favorite has to be PATHETIC HARRY, but they all work so incredibly well for this concept.

As for the rest of the puzzle, we had some great fill here. I think this is the first time I’ve seen DENTAL DAM in a puzzle, and it’s a great inclusion here. The clue for PIE CRUSTS (Fruit wrappers of sorts) was great – clever and took a minute to figure out, and the other long downs – SCRIBBLED and WHOLE MILK made the puzzle open enough to get a smooth solve, even when the anagrams hadn’t clicked for me yet. This grid shape, with fewer but longer themers and plenty of room to play is one of my favorites so it was nice to dig in here and travel throughout the puzzle and enjoy every part of it.

It’s Friday and tomorrow is Lollapuzzoola! Today we have a lightly challenging puzzle from Anna Shechtman, and I have mixed feelings about it. I loved all of the long entries and the grid design, but the fill left me a little cold. 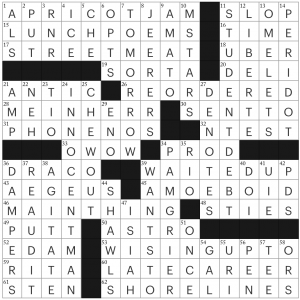 Just briefly, I think the grid is super cute. I love the little pattern of black squares in the middle, and the number of middle-to-long entries that it demands is definitely ambitious. And for the most part, this puzzles pulls it off!  In terms of the long stuff, there’s some really fabulous entries like APRICOT JAM / LUNCH POEMS / STREET MEAT in the NW and STUDENT DEBT / INNOCENT MAN in the long down positions. I’m not as hyped about the SE corner, with the kind of awkward WISING UP TO and the less-interesting LATE CAREER, but it’s still pretty good!

My main issue is with the fill, which was less than ideal. I know we do what we need to in order to make low-word-count themelesses work, but I can’t say I enjoyed M-STARS/ JEERERS / NEH / STEN / ALS / RNR / UIE / DO I / N-TEST.  Also AMOEBOID?

Overall, an enjoyable solve, if not my favorite of the week! Still plenty of stars from me. See you all at Lollapuzzoola tomorrow, yes??

Theme: Constellation names are hidden in well-known phrases. Hidden constellations seem quite apt since I always have a hard time trying to discern any constellations in the sky other than the Big Dipper. (Pity my poor wife who suffers from retinitis pigmentosa which means she has terrible night vision. She’s only ever seen a maximum of maybe five stars at one time, and that’s on the clearest, most star-filled nights.) Oh, there’s also a pseudo-revealer of SIGN IN [Log on, and a theme hint]. 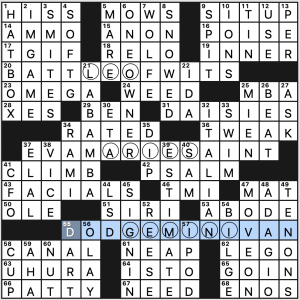 Nice. A hidden LEO at only three letters doesn’t seem like much of a big deal, but I’m duly impressed by the other two, especially the last one. Those are nice finds.

Nothing in the fill felt scowl-worthy at all, and some of it is quite nice: LA BAMBA, ITALIAN, “I’M GAME,” MOVE ON, and DAISIES. I did not know Mike WOLFE of American Pickers. I thought it would be a show about guitarists, but no, it’s about antiques and collectibles on the History Channel.