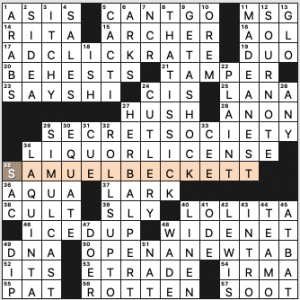 Dang! I was completely stuck in the NW corner and it dragged my finish time waaaaay up. This does not bode well for Lollapuzzoola tomorrow, does it? That whole corner felt like a Newsday Saturday Stumper, just mystifying clues intersecting one another. For [Unrepaired], I thought of DEAD before AS IS. Forgot the [Romance novelist’s award], tried NORA before RITA. Didn’t know that AD CLICK RATE was a thing ([Internet marketing metric]). Most deviously, the crossing of 23a and 5d screamed “they both end in an S,” but no, they turned out to be SAYS HI (not SMILES) and CACTI (not CA**S). [Finer cut, usually], SIDE A? Zero nudge there for “this is about vinyl records … which actually have “A-side” and “B-side” in common parlance, so I hate SIDE A as an entry. [About 5% of the world’s population] turned out to be ARABS, and I don’t think I knew that number.

Not keen on CAN’T GO as an entry, and I’m wavering on the three “blank a blank” entries’ goodness. GET A SHOCK, OPEN A NEW TAB, MADE A NEST?—Do you vote “these are good, fresh fill” or “eh, that’s stretching things”?

LANA Wachowski is nice to see here, but comic-strip IRMA, award RITA, and abused LOLITA don’t really give off a great vibe where representation is concerned. There are better cluing options for real IRMAs and RITAs.

Not often you see a “Thursday” type of theme in the Universal!

THEME: The word BLACK has been omitted from phrases and replaced by a black square. 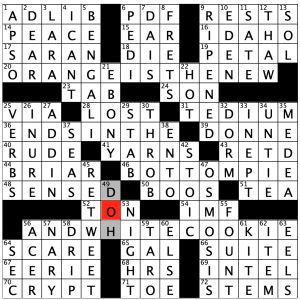 I think this will be a great introduction to some solvers as to the cleverness that can exist within a crossword, especially since the fill is accessible to a casual solver. So bravo for that! It’s not the type of grid we see in the Universal that often, so it really stands out as something unique, even though we’ve certainly seen this idea play out in other publications.

I did find it odd that two of the entries were desserts, one of which I’ve never heard of (but sounds delicious!), BLACK BOTTOM PIE. And I don’t think ENDS IN THE BLACK is a phrase I’ve used before, but I almost prefer it that way: ORANGE IS THE NEW BLACK and BLACK AND WHITE COOKIE were dead giveaways!

I had fun with the fill in the NE: 16A [State ID?] IDAHO was a very cute clue and I love when Universal creates clues that make you go “I never noticed that!” like 13D [Note that becomes a musical piece when “o” is added] SOLO.

So, even though it’s been done before, I like the presentation very much. 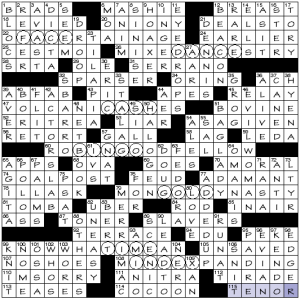 Simple concept: all the theme answers are phrases that contain a letter sequence spelling a word that can proceed “card”. They’ve been circled in advance.

All of these are very good. Also, the hidden words consistently span more than one word. I appreciate that sort of attention to detail.

Are you refreshed and rejuvenated? Regardless, time for me to go. Solid puzzle, as I said. 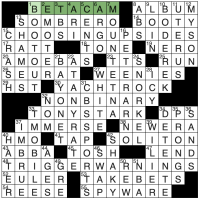 I enjoy Christopher’s puzzles quite a lot on his website, but this is a really good one, so I am glad this one made him some money! I enjoyed this puzzle quite a bit! My time was actually right around the 5 minute mark, but I had a slight error that I had to fix and it took me a few moments to find it. Let’s just say I had an issue with 7D (see below!). This will be a short write-up today, because I have to get ready for a crossword tournament! My understanding is that there are over 1,300 signed up for Lollapuzzoola this afternoon. I will see many of you there! 4.3 stars for this puzzle.

That is all! See you at Lollapuzzoola! 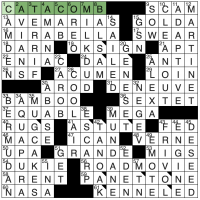 Once again, for the second time in two weeks, I was properly Stumped. Note all of the error marks! Next week for SURE has to be a lot easier! Maybe Stan heard me when I finished one of these in around 10 minutes recently! Hopefully he isn’t using me as a barometer for how hard to make these things! But I found this especially thorny today. Maybe I am just getting old! As mentioned in the LAT write-up, there is a crossword tournament today, so there will be a busy afternoon here! 4.6 stars for a stellar yet extremely difficult challenge.

I do have a lot of comments, though!

There are many more phenomenal clues, but I will stop here! Everyone have a safe and healthy weekend!