I don’t know why the title is all upper-case. The theme answers are all alternative titles for movies. There’s nothing about it that suggests a need for yelling. 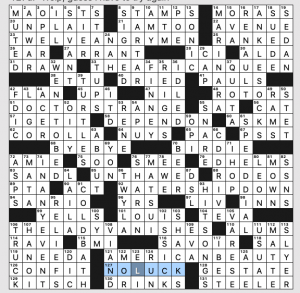 This is a solid, accessible Sunday theme; the answers are inferrable without being predictable. I prefer wordplay, and that’s a matter of taste rather than quality.

What I didn’t know before I did this puzzle: that Charles FINNEY is known as “The Father of Modern Revivalism.” I know of Finney; I was an English major with a concentration in American Studies and I remember him and the Second Great Awakening. Didn’t know the epithet. Also did not know that ED HELMS appeared in “The Hangover.” That’s on the list of movies I have no interest in.

This is a cute idea for a theme and most of the answers were amusing. And the fill….we’ll get to that.

Each theme answer is someone who took a job description too literally. 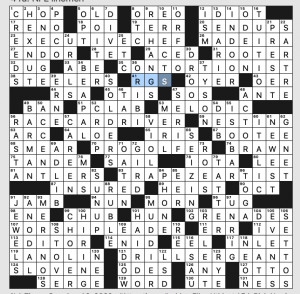 I didn’t like WORSHIP LEADER when I was solving. A bit of Googling shows that this is due to my own narrow-mindedness, so all the themers are solid except for 23a, as I noted above. If that had been further down and not the first one I encountered, I would have liked the theme better, which isn’t fair. I just rewrote this whole paragraph to take out my carping. It’s a cute theme and almost entirely well-executed. Nice!

So I said we’d get back to the fill. They managed to come up with an African antelope I’ve never heard of before, and I’ve been doing crosswords for 50 years. ORIBI? Really? ANODAL is horrible on its own. It’s even worse because it could be ANODIC and who would care about the difference? And it’s right next to plural MERINOS. Ugh.

Also: I think this is the second week in a row that I have objected to a clue referencing Mike TYSON. This one is [“Iron Mike” in the ring]. How about [Convicted rapist in jail] if it has to be him? Or better yet, let’s use CICELY, as Amy suggested the last time I raised this issue. CICELY Tyson is still active. Mike the Rapist hasn’t appeared in a boxing ring since 2005. Why should he continue to show up in our puzzles when there is an alternative that would also boost the representation of women in color in crosswords?

I did like 34d [“Little help here, bud?”] for BE A PAL, and it was lovely to see MERL Reagle make an appearance. Crossworld still feels his loss. I think we always will.

What I didn’t know before I did this puzzle: that Spongebob Squarepants has a driving teacher named MRS. Puff. 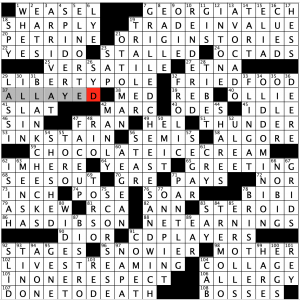 I think a 21x Themeless is something you really have to be in the mood for. The last couple times I solved one, I wasn’t. Luckily for me, this time I very much was, even after I completely faltered in the NW, entering absolutely nothing at first go-around.

I found a much more solid footing in the NE, entering ORIGIN STORIES, TRADE-IN VALUE, and GEORGIA TECH with no crosses. Doesn’t that feel good when that happens? Even if the clues are a touch easy? I made my way very steadily through the puzzle in a clockwise fashion before getting back up to the NW, where most of my time was spent.

Tough stuff I met up there was:

4D [Like an arachnid’s web] SPIDERY. Such a laughably weird clue/answer pair.

22A [“Sure!”] YES I DO. One of those where it could be a bunch of different answers.

20A [___ doctrine (belief that the pope has preeminent authority and is the successor of the saint associated with the pearly gates)] PETRINE. Needed every cross, even with the extra help in the clue! 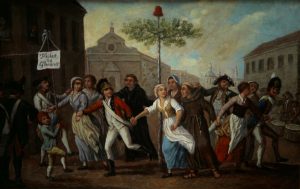 6D [Solution used for dipping pretzels before baking them] LYE. I was hesitant to enter LYE because I’ve never seen it clued with respect to food preparation!

29A [Symbol of resistance in Colonial America] LIBERTY POLE. New for me.

I admit I entered MAN CAVE before SHE SHED [Personal space with a gendered name]. Same number of letters!

Found this fun all around with a great blend of trivia, tough stuff, clever clues, and inferable answers. Nothing crossed unfairly. Making a 21x themeless as fun as this is no easy task. 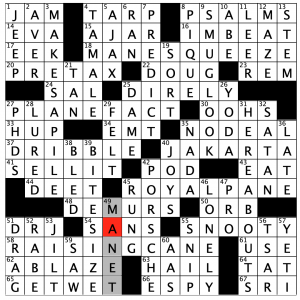 THEME: Homophones that rhyme with VANE to create wacky phrases.

I never quite mastered the VANE/VAIN difference. I always find myself double-checking.

Fun, over-the-plate common theme type here, made consistent in that they all have the –AIN rhyming sound.

Favorite mistake was 65A [Take the plunge?]. I entered GET WED… which makes sense, right? Of course, it’s not a phrase I’m familiar with, but I’ve seen weirder in crosswords. GET WET, the correct answer, is leaps and bounds better.

Not sure why AJAR needed a ? in its clue [Cracked open?]. Seems like a very interchangeable definition to me.

Theme: Each well-known phrase hides a three-letter AIRPORT CODE (115a, [Each starred answer hides one]). 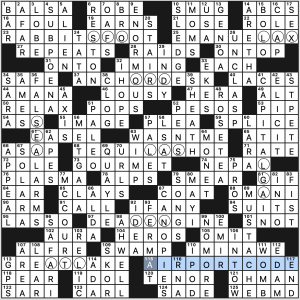 I like the conceit. These airports might be locations where you make connections and each one is “connecting” two words together. Works well enough for me.

How many of these airports have you been through? I think I went with JFK the one time I’ve been through New York, and I’m not sure I’ve ever flown to Vegas, seeing as it’s within driving distance of L.A. where I used to live. But I’ve been through the rest of them.

What have we got in the fill? SUBPOENA is not a common crossword answer, so that’s interesting to see. MUSTACHE is great, and I liked CANOPIES and Frank MCCOURT. “WASN’T ME” is hilarious when you think of how it’s most often used. Ooh, and can’t pass up mathematician FERMAT.

I could do without IMING clued as [Chatting with online] as if this was something people still say (they don’t still say it, do they?).

Solid grid as usual from ZB. Nothing earth-shattering, but it works well.