This may be my fastest Monday time ever – I don’t keep track. It was quick and smooth and well-pitched for a Monday, with a seasonally appropriate theme.

I didn’t pick up on the theme until I got to the revealer. 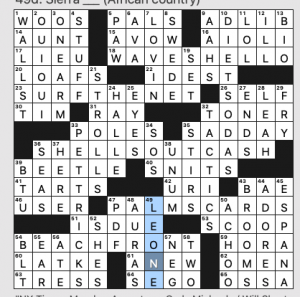 What I didn’t know before I did this puzzle: I got nothin’, which means there was no gamer, movie, or TV arcana. A good Monday. 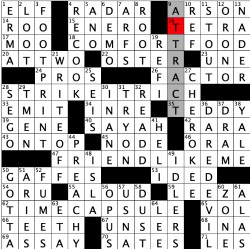 I wasn’t familiar with Amy Johnson’s name; she was last seen on Fiend on Mother’s Day 2018. Hey lady! If you can make a 21x, how ’bout some more puzzles of all sizes? We all know the world could use more women constructing!

This Monday grid is a fine, smooth solve. The fill isn’t super exciting, but it’s also pretty low on clunkers. (Can we please, however, agree always to clue ANO as a partial? Like “That’s ___-brainer” or “It’s ___ from me”? Because reasons.)

I’m only about 80% on-board with the theme, though. As 68A and 60D, which together are “on one’s game…and [a] hint to the start of this puzzle’s longest answers,” tell us, we are IN A/ZONE — and each of the theme entries contains a word that commonly precedes ZONE:

I also don’t love IN A/ZONE as the revealer, as IN THE ZONE feels more natural. So: The theme is consistently executed; make IN THE ZONE the revealer and swap out FRIEND LIKE ME for something like SAFETY ORANGE or HOT COMMODITY and I’d be 100% behind it.

Also, I know this’ll never happen on a Monday, but I would have loved to see a reference to the Paula Abdul song in 9D (ATTRACT, clued as “What opposites do, it’s said”). Because Paula Abdul.

I am on “vacation” this week, in that I turned off email notifications but am otherwise doing nothing exciting, so in the spirit of “vacation” my posts this week will likely be pretty brief (although who knows!). 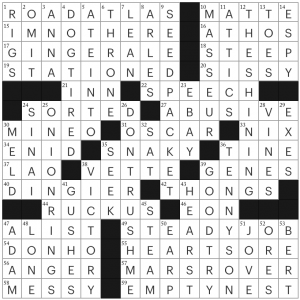 In today’s puzzle from Patrick Berry, we have some crunchy stacks of 4 9’s in the NW and SE and a few nice long downs. The stacks are ROAD ATLAS / I’M NOT HERE / GINGER ALE / STATIONED and STEADY JOB / HEARTSORE / MARS ROVER / EMPTY NEST. These are all pretty solid, and I thoroughly tripped myself up by putting IT’S FOR YOU instead of I’M NOT HERE in the NW for [Obviously false announcement upon hearing the phone ring], mostly because I think my parents used to say that to each other when the house phone would ring. Remember when there was no caller id? Yeah me neither. The long downs are ONION RINGS / DON’T RUSH ME / SEED PACKET / THE SHINING, all of which I love a lot. The clue on ONION RINGS is a real beauty: [Side that gets battered?].

Overall, numerous stars from me for a clean if not overly exciting grid. Ok, well, that does it for me — back to doing nothing on my couch!

Theme: Each theme answer ends with a word describing a land feature that progressively gets bigger as we complete the puzzle. 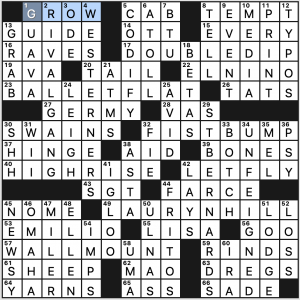 Note also the hint at 1a: GROW [Get bigger]. Starting from a dip seems odd like an odd choice, because if a dip were to GROW it would become a hole or a ravine or a valley. But if we look at it from the perspective of adding earth to make our land mass get bigger, then it works fine.

I liked the slow-burning aha moment as the theme dawned on me and as I discovered more and more theme answers (six is a lot considering they’re all in the Across direction).

And they don’t degrade the fill noticeably. In fact, considering each of the long fill answers (RIVAL GANG, WESTERNERS, ST BERNARDS, and UNFEIGNED) as well as many shorter ones, cross not one but two themers, the fill is impressive. On the shorter side, I liked seeing BONES (clued as Dr. McCoy’s nickname), LET FLY, FRITOS (right next to LAYS), GUAVA, and GERMY (my niece once had a kindergartner friend name Jeremy whom she called GERMY).

Only one clue I’ll note: 48d. [First name in comedy, talk and game shows]. ELLEN. She’s been under heavy fire lately for behaving terribly to the people working for her. So while the clue is technically right, it feels a little out of the loop.

Lastly, let me say how nice it is to see another woman’s byline (in addition to recent grids by Burnikel and Ellerin) in this venue. It’s still nowhere near parity, but it’s a start. 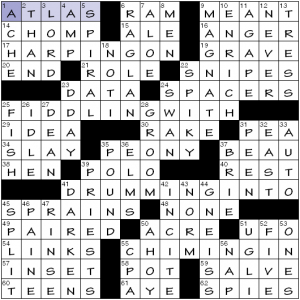 Musical instruments as the basis for present participles.

Last one feels weakest, as a singular chime  is not nearly as common an instrument as the others, and also because the clue contains what could be seen as another present-participled instrument—the pipe. As such, it really looks like a fifth theme answer.

Aside from that one fault, it’s a nice Monday-easy theme to get a handle on.