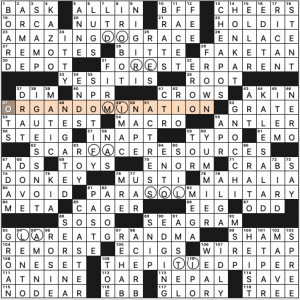 Today’s puzzle creator has a lovely and rich missive in the Constructor Notes section of Wordplay. Do check that out if you haven’t already read it. Barbara Lin is a newish constructor—this is her first Sunday-sized puzzle, but she’s had at least eight prior puzzles, all in the past year—but this is a polished outing. It’s nice to see a healthy smattering of women’s names in the fill and clues, too.

The theme entries add DO, RE, MI, etc., to familiar phrases, and the resulting goofy phrases are clued accordingly:

Getting a smile out of me (and a laugh out of my husband) for two of the seven themers is actually a decent performance, given how many themes are devoid of humor or surprise. I liked it. The back story of what motivated Barbara to create this theme is touching, too.

Oops, our dinner is about to be delivered earlier than expected. Fave fill: MAHALIA and the other women, GNOCCHI, I GUESS NOT, but not KALE SALAD because kale, meh.

Another mindbending, multi-layered, 21x offering from Evan this week (at second glance I think it’s 20×21!).

THEME: Starred clues are “early risers” in that the first letters in the answer need to be read vertically upward. 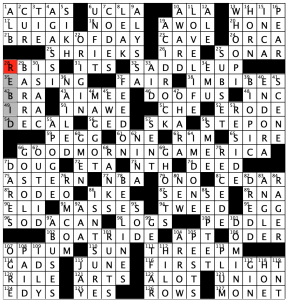 THEME ANSWERS (from bottom to top):

Unfortunately, when I last updated my Mac, the only photoshop program I kinda-sorta know how to use didn’t update with it, so I can’t color code the solution grid for a cleaner visual. Any help with that? Finding and learning a new program is on my list of things to do!

This is really, really clever. I especially like how the actual puzzle seems to be saying “GOOD MORNING!” to its many solvers who are likely to solve in the AM. The fact that each of the altered horizontal answers are still acceptable crossword fill is A) entirely expected because Evan wouldn’t do it any other way and B) phenomenal!

While regular solvers are likely to have seen this sort of idea of letters veering from their horizontal course in puzzles before, this entire grid felt fresh.

Tougher stuff in the gird for me largely included names (as usual). Didn’t know AIMEE, PEGG (though there’s a nice little helper to determine that one at 95A), DOUG, ELI, ALYSSA, ISAAC, NINA, and HILO. I will say that all were fairly crossed and I much prefer the fresher clues for them over the ones I’ve seen time and time again. Still, I don’t think it will stick unless I see them over and over. I did know Kelli O’HARA! I’ve seen her in everything she’s been on on Broadway, including the dreadful Dracula, the Musical.

My favorite mistakes were ENO for ONO [“Children Power” musician] (and you’d be surprised how willing I was to accept GHESTS for 69D [Some characters in Jesmyn Ward’s book “Sing, Unburied, Sing”]). And FIRST THING instead of FIRST LIGHT. I kind of like FIRST THING better because it seems to hint at what should be done in the puzzle.

I don’t know how Evan keeps meeting the bar he sets, but he did it again. Bravo!

I suspect something more standard will be greeting solvers next week. 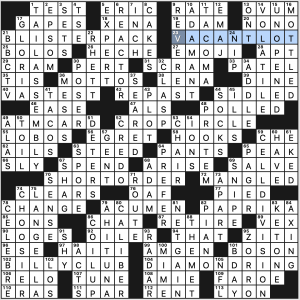 Some of these work better than others, but on the whole, it’s a solid and mostly enjoyable theme.

The grid is filled well—more utilitarian than sparkly, but filling a 21x smoothly is no easy task. My favorite entries are actor Frank LANGELLA and PAPRIKA, but the rest of the long fill is clean as well (with the possible exception of VASTEST).

The theme works, has a touch of humor, and the grid is well-constructed. 3.6 stars.

THEME: Phrases that being with M?LT where the second letter cycles through the vowels. 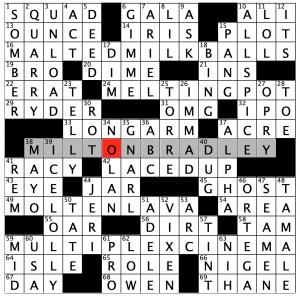 A strong vowel-shifting theme with lots of long answers! New for me was JERI [Ryan of “Boston Public”], which wouldn’t have been too big a deal but I had BAR for JAR 44A [Tip location] (either works!), and I misspelled MOLTEN as MOLTON. So BORI to me looked just as good as JERI! Figured it out eventually.

Man, it’s hot. I’d go inside except that my husband is in there, and he just got back from taking our kid to CA for her junior year of college, so he’s quarantining and I can’t go in until he comes out. (Yes, school is all remote; yes, she has an off-campus apartment; yes, we carefully considered options and risks; yes, I’m terrified)

Ed and Rich give us fruity puns! I enjoyed this theme. 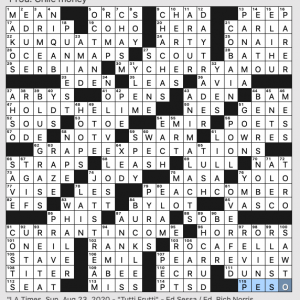 All the theme answers are solid and amusing and the fill was mostly OK with the exception of the NW corner. As I’m sure I’ve said before, when something is not quite right with the NW corner it bothers me more than when it shows up elsewhere. That’s not fair, I know.

OK, he’s come out so I can go in and shower. I’ll skip straight to What I didn’t Know Before I Did This Puzzle: see above re: ARMER, who apparently produced the TV show “The Fugitive,” which ran from 1963 to 1967. I was 7 in 1967 and not allowed to watch scary television. I also did not know that JODY Watley won the 1987 Grammy for Best New Artist.

ETA I forgot to flag an egregious dupe: 66a [Lack on some gowns] for STRAPS, and 51d [One may come with a train], GOWN. That’s just not right.