The theme answers all have the prefix “ex” and are defined literally. Sort of. 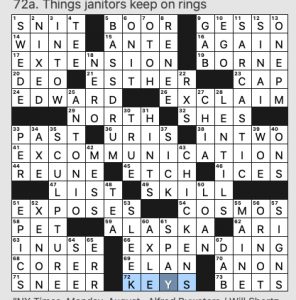 That last one seems a bit opaque, although it was easy enough to get the answer. I enjoyed the theme – don’t remember seeing anything like it recently and it’s accessible for a Monday (mostly).

What I didn’t know before I did this puzzle: this probably is more of “I forgot” than “I didn’t know,” because I’ve read “The Tempest” so at some point I’m sure I was aware that ANTONIO was the villain. 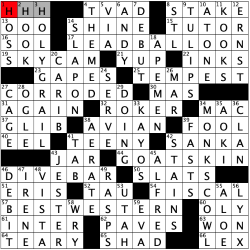 This theme is for the birds! No, really. The central answer, 38A, AVIAN, is clued as “Bird-related…four of them have landed at the ends of the answers to starred clues”. Said starred clues are:

Sorry…not my favorite. First of all, I think the theme would have been improved mightily with circles in the squares that contain birds’ names, especially since in the Down theme entries the birds don’t hit at syllabic breaks. Don’t make us work that hard on Monday, y’all. I also had to look up what a RAIL was in its bird context; I think HMS BEAGLE, with EAGLE as the bird, would have been a better pairing…

…for MONK’S COWL, which frankly feels contrived. (Google it as a phrase and you get 35,500 hits, which is not a huge number.) Any number of more natural-sounding BOWL phrases spring to mind instead (PEACH BOWL, PUNCH BOWL, BREAD BOWL).

The fill is pretty decent, although I could do without HHH sitting on top of OOO at 1A/13A. I did enjoy the Hitch reference at 45D.

It’s been 4.5 years since I last saw a puzzle from Mark Danna, Mike Shenk’s assistant at the WSJ. He puts together a clean puzzle, so let’s see what he’s got in store for us this time.

The revealer at 57a is TAKE A SEAT [Relax, and what the starts of the starred answers can do]. Each of the first words in the other theme entries can precede the word “seat.” I actually smiled when I caught on because I thought it was a great use of this phrase. 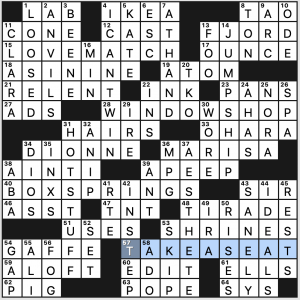 Nice and breezy, eh? Clean entries and a theme that gave me a pleasant little aha moment. I’ll take it.

In the fill, I like the looks of ASININE, TIRADE, and AESTHETE. But I really liked “I CAN’T WIN” [Complaint from a sad sack] because that was me today. It began when my car wouldn’t start. When I finally got it jumped, I drove it around for half an hour, and then it decided to conk out on a busy freeway. Got towed and a new battery, but it looks like I’ll need a new alternator too. Sigh. Then other not fun stuff happened today, but I won’t go into that.

I also like the look of DIONNE and MARISA taking center stage in the grid. My oldest daughter shares a name with one of these ladies. Which one? Let’s just say that I enjoyed the heck out of My Cousin Vinny.

Other clues were Monday straight which allowed me to finish in a speedy time (for me). All in all, this was a quick, but pleasant theme and grid. 3.8 stars.

This is so pretty! Just a lovely grid design propping up this puzzle from Natan Last, which is full of the interesting, trivia-heavy entries and clues that have definitely come to represent Natan’s themeless brand. I always enjoy this style of puzzle, which earns its difficulty stripes more from the deep cultural knowledge-base it requires than from particularly challenging wordplay, although I had a favorite wordplay clue that I will flag. 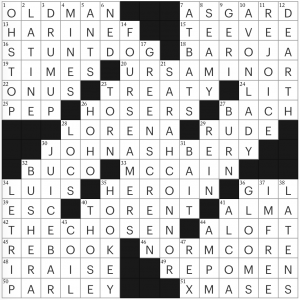 Some of the long entries required cultural trivia knowledge (or taught it to you via fair crosses), like JOHN ASHBERY, SARAH CONNOR, and THE CHOSEN. Other long entries, like URSA MINOR / GREEN SCREEN, were more general knowledge, while I was completely thrown for a loop by the sports-trivia of FOUR SEAMERS (see what I did there?). Other sports entries included perpetual crossword golfer LORENA Ochoa, more commonly clued for her last name, and LUIS Aparicio. Other proper names that may have upped the difficulty for some solvers include HARI NEF, Pio BAROJA, NED Stark, GERI Halliwell, and GIL Gunderson.

Overall, this was a fun solve! Good fill all the way through, unique and aesthetically pleasing grid design, and fun trivia. Lots of stars from me! 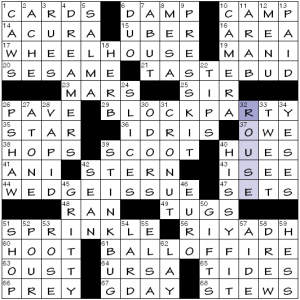 This is a neat theme. Existing phrases are reimagined as cheese-related, each exemplified by a variety and its associated shape (format?). Or at least a shape that’s often associated with that cheese type.

So yes, this theme gave me a little smile.

Just to give you a peek behind the curtain, for musical accompaniment I figured I’d choose a track by the String Cheese Incident, and found an appropriate title in “Wake Up” (32d [Awaken] ROUSE) from what is considered their best studio album. Alas, I didn’t care for it and found “Just Passin’ Through” to be much more interesting though still not great.

Good news is that—to me, at least—it’s reminiscent of a much better song:

Nice, solid Monday offering. Also semi-soft and soft. But not hard. Except for the cheddar. You know, I deeply regret going down this route. Ay.