This week we’re looking for a six-letter verb. It was not easy to find. 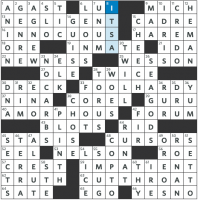 There are six themers, but I could not for the life of me figure out how to extract one letter from each.

This took me forever, hours of staring at the grid, with no ideas or inspiration. And from what I heard from friends, this played tough for many. I finally broke down and asked for a nudge, which was: “Six adjectives each want to yield a letter. Consider synonyms, guided by the title.” I’d kinda already gathered that each of the six delivered a letter, but “synonyms, guided by the title” was just the little bit of nudge I needed — plus also google, because I wasn’t feeling creative. I googled “negligent synonyms” just to get my brain moving, and there it was: the first synonym listed was CARELESS.

Aha! “Less and Less” is the title, and the grid entry right next to NEGLIGENT is CADRE. Take one letter less of CADRE, add –less, and you get CARELESS. Turns out, next to each 9-letter themer is a five-letter entry, out of which you extract one letter and add -less to create a new synonym for each corresponding themer, like so:

Take those letters subtracted (i.e. “less”) the corresponding entries, and you get DEDUCT, which also means less, in a certain sense, and is a six-letter verb and our answer. I really admired the meta mechanism for this one after I solved it, but I felt rather gormless during the solving process.