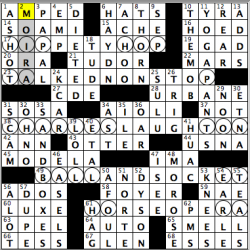 Good day, everyone! Hope you’re all doing well and stayed patient on here while we did a little maintenance on the site. At this time next week, we’ll be getting ready to bring on September. One month closer to ending this wretched year, right?!

We may very well be dancing in celebration of leaving 2020 behind, and this puzzle involves some dancing, in a way. Each of the theme entries feature circles at the beginning and end of the entries, and the letters combined form a type of dance move/style.

The only entry that threw me for a loop was MOIRA, as I could not come up with the name and needed all the crosses..and that was after I had to correct “hoppety-hop” to “hippety-hop” afterward (2D: [Kelly of “One Tree Hill”]). I will admit that I invested in some stretchy leggings for running in the cooler temperatures that appear to look like YOGA PANTS (11D: [Attire for folks who do lots of legwork?]). I’m sure it was coincidence, but I just read in the news last night about Justin Townes Earle, the son of Steve EARLE, passing away at 38 and now I’m seeing Earle mentioned today (54D: [Grammy-winning “Guitar Town” singer Steve]). Rest in power, Justin.

“Sports will make you smarter” moment of the day: TUDOR (21A: [House style fit for a king?]) – Who was the last pitcher in Major League Baseball to record 10 shutouts in a season? The answer is former St. Louis Cardinals pitcher John Tudor, who accomplished the feat in one of the strangest yet amazing single-season pitching feats in recent memory. In that 1985 season, a year where the Cardinals made the World Series and lost in seven games to the Kansas City Royals, Tudor started the year 1-7 in the season’s first two months. From June on, Tudor went an astounding 20-1 with an ERA of 1.37 and finished with an overall ERA of under two (1.93). Though Tudor was amazing throughout the entire postseason, he crumbled in the biggest game of all: Tudor allowed five runs in less than three innings in Game 7 of the World Series as the underdog Royals went on to win the Fall Classic. Tudor did win a World Series as a member of the 1988 Los Angeles Dodgers. 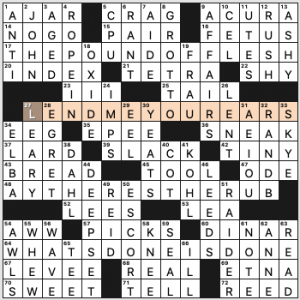 Shakespeare goes to a cookout, that’s the theme:

Three quarters of the theme relates to meat. Where is the coleslaw, the potato salad, the watermelon slices? I blame Shakespeare. 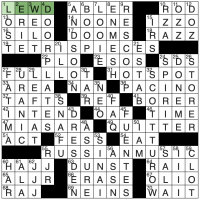 We are going back to November of 2004 this week, and a clever theme was executed here that is still fairly relevant! There are really only the two theme entries:

So where are the pieces? There are hidden clumps of the letters O, Z, L, J, I, T & S, which are the names of the pieces! This is a nice little feat of construction, especially since it couldn’t be easy squeezing all of those J’s and Z’s together. Has someone duplicated this feat with pentominoes? Is that even possible? Did I just say a theme idea out loud, even though it is very much a copycat?? Nicely done, and yes, I still play Tetris from time to time even today! 4.3 stars for this particular stroll down the Jonesin’ memory lane.

Another Jonesin’ oldie coming next week! 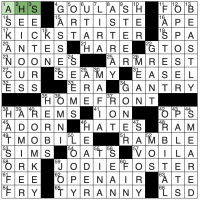 There are some sneaky theme entries in today’s puzzle. Here is the list of themers and then I will explain:

So we are referencing the phrases starter home, rest home, mobile home, and foster home. Very nice execution of the theme, which includes two 7-letter entries. Usually the theme entries are the longest entries in the grid; technically this is the case, but there are SIXTEEN other 7-letter entries! I certainly didn’t realize where they all were until I got to the blatant revealer, and with it being in the center of the grid there isn’t much confusion as to what is going on. A scan in CrossFire show virtually the entire edge of the grid is made up of these other 7-letter entries. This is not a complaint, after all that, just an observation! Nice puzzle, Gary! 4.3 stars. 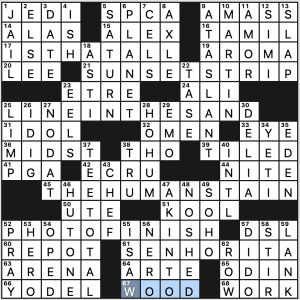 Good set of theme answers. I’m not so sure about that revealer though which feels a little awkward, especially broken up as it is. WOODWORKING would feel more natural, but obviously would take up a lot more real estate.

Also, those nine-letter Across answers (“IS THAT ALL?” and the Portuguese SENHORITA) are very nice, but they sure look like theme answers at first glance.

The rest of the grid feels workmanlike, but I do like the SATURN/PLANET stack and “HUT ONE” is fun with its clue [Words before snapping].

I would never have known HERO clued with [Leander loved her]. Maybe Greek myths just aren’t in my knowledge base, but that seems uncharacteristically tough for a Tuesday.

Nice theme. Not so much sparkle in the fill, but it works. 3.6 stars.