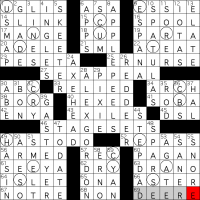 hello and welcome to episode #638 of matt gaffney’s weekly crossword contest, “Treasure Hunt”. for this week 3 puzzle, we get these instructions: The Feared Pirate Captain Gridd has hidden a great piece of treasure. Are you clever enough to find it? This week’s contest answer is the missing piece of treasure.
okay, so what’s going on? i don’t really know. there aren’t obvious theme answers in the grid. the long answers include two 9s and two 10s:

in any event, i don’t know what to make of these. what else can we look at? a pirate’s treasure hunt usually involves a treasure map, so my eye was certainly drawn to the clue for 1d: {You can see the Mississippi River on one} U.S. MAP. in fact, in one of the most memorable MGWCCs ever, matt did turn the grid into a U.S. MAP on which you could see the mississippi river! but he’d be unlikely to repeat such a unique mechanism, even going on ten years later.

what else? well, X marks the spot on a treasure map, but this grid has three X’s, all near the center of the grid, all on the two main diagonals, including one in the very center of the grid, where {Put a spell on} HEXED crosses {Short cut} PIXIE. i’m not sure what to do with this.

the upper section of the grid has the related terms {Currency from 1868 to 2002} PESETA, {Language spoken in Londres and Nueva Orleans} INGLES, and {Country with a tilde} ESPANA clumped together. this put me in mind of the spanish doubloon, a currency widely used by pirates, and also of pieces of eight, which were fractions thereof. “piece” in the instruction also had me thinking along these lines. it’s an intriguing idea for a meta mechanism. how would it work? the first idea to spring to mind was to look at numbered squares in the grid, either the numbers ending in 8 (APABSEN) or the numbers divisible by 8 (ASACHSAI). looks like nothing doing there.

ah, okay, here’s something: the three X’s in the central area of the grid. that central area is a 5×5 region of white squares. rather unusually for a grid pattern, there are five such areas, one in each corner in addition to the central block, forming their own X shape. the three X’s in the central area pick out three locations within that 5×5 block: row 1 column 1, row 3 column 3, and row 4 column 2. now we can take a look at what letters are in the corresponding squares of each of the other corner 5×5 blocks. (i’ve circled them in my grid screenshot above.) they spell out UND / ERT / HES / EAS, or UNDER THE SEAS. aha!

well, what next? my first thought was to look for names of seas in the grid (red, aegean, aral, etc.). no dice. my second thought was to look under the C’s in the grid, of which there are four. underneath them are the letters U, R, B, and Y. aha! i see what’s going on here. captain gridd has contrived to BURY a RUBY under the C’s, depending on whether you read the letters clockwise or counterclockwise. so RUBY is the meta answer.

i really enjoyed this meta! like any good treasure hunt, there was a sequence of steps to follow, and some of the steps were harder to figure out than the others, but it was very satisfying at every step, and the final meta answer was extremely slick. the last MGWCC treasure hunt i can remember was waaaaaay back at MGWCC #7, which was so long ago that i hadn’t yet started blogging the puzzle, even at the old crossword fiend blog. that one was also very cool, but this one was tougher.