BACKCOUNTRY (60a, [Rural area, and what can be found in this puzzle’s circles]) is our theme where country names are hidden backwards inside well-known phrases. Circles are employed to tell us where to look. 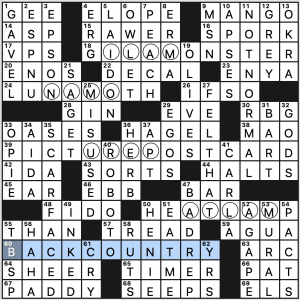 Good fill, like a MANGO on a SPORK; that’s NOT NORMAL, I guess. SCAR-FACED with a Bride of Chucky clue. A FELT HAT and Mr. ROBOTO with a BAD REP. 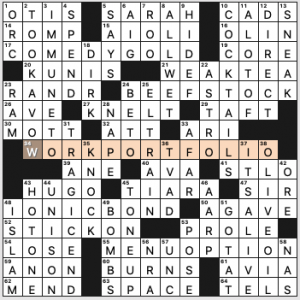 The theme hinges on financial assets, basically. The revealer, WORK PORTFOLIO, is clued as 34a. [Collection that demonstrates job skills … as suggested by 17-, 24-, 48- and 55-Across]. So each themer is a phrase that ends with a word that’s a financial thing in other contexts, and is clued with a job that might relate to that:

The theme doesn’t work for me because some of these aren’t remotely plausible as possible investments. What would menu stock options be? How would you sell bonds that are ionic? There probably are major beef companies that are publicly held corporations, and There are comedians with a net worth in the hundreds of millions, so they could actually buy plenty of gold. Just feels uneven to me, and WORK PORTFOLIO doesn’t quite make sense to me as the revealer.

Overall, I wasn’t loving the fill. “IT’S ALIVE” makes me laugh because I read the novelization of the 1970s horror movie by that name when I was maybe 12. That and Coma were the scariest things I read when I was a kid. And I love WEAK TEA because of the second part of the clue, [Insubstantial beverage … or argument]—a contemporary usage. OLIVE OIL, a TRAGIC END, COCKTAILS—also good. But this Chicagoan looks askance at EL TRAIN (my family agrees the E is superfluous), and I wasn’t digging R AND R, AN E, ATT (AT&T’s ampersand is a key part!), ST LO, ANON, AVIA, TELS, TOOK A VOW, DIRK as a knife, singular HOT ONE, HI-DEF, A LOT OF, TV AD, GOT AT … meh.

Plural Hot Ones is among my favorite things on YouTube. A celebrity interview show that combines really interesting questions and discussion with the challenge to eat 10 hot wings (which can be vegan or cauliflower for celebs who don’t eat chicken) with an escalating scale of hot sauces, ranging from basic low-grade sauce to the stuff with a Scoville rating of, say, 2,000,000. If you’re looking to pass 20-25 minutes, such as while you eat lunch at your desk, you could do worse than watching any old Hot Ones episode. (The show is currently filmed with the host and celeb at their respective homes.) The comedian Eric Andre is on the one I’m watching right now but I’ll link an older one from the studio, with John Boyega. 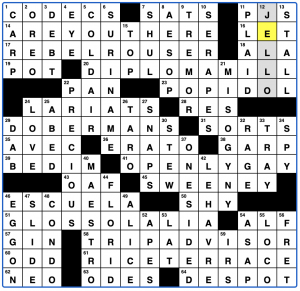 Fifty!  Fifty AVCX Themeless puzzles have been published, and KAC has the 50th one.  As always with Kam’s work, it’s a visually pleasing grid, with some equally pleasing (and tricky) fill.

I wasn’t familiar with Duane Eddy’s “REBEL ROUSER” before solving this puzzle, but here it is.

Hellooooo team. Today’s New Yorker is a moderately challenging puzzle from Patrick Berry, although I’m not sure how apt that challenge rating is because my brain is in a deep fog and I still managed to solve this at around my average Wednesday pace, which makes me think it may have been easier than normal? We’ve got some fun long entries in this one, with a nice staircase middle and a neat grid design. And right up until the very end, this puzzle was doing a fabulous job on the representation front, and still overall comes out ahead. 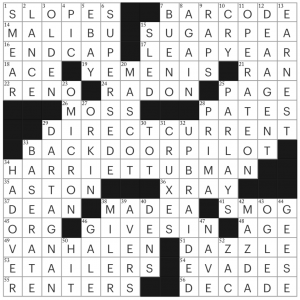 The long entries in the staircase were DIRECT CURRENT / BACKDOOR PILOT / HARRIET TUBMAN. I have always found the AC/DC “war” intriguing, so this was a pretty quick get for me. I had never heard of a BACKDOOR PILOT, but it was fairly inferable with enough crosses, all of which were eminently reasonable. I just spent a bunch of time reading the internet about various BACKDOOR PILOTs and wow, this is a more common phenomenon that I realized! I also didn’t know about HARRIET TUBMAN‘s role in the Combahee River Raid (ok, I didn’t know *anything* about the Combahee River Raid), so I was delighted to learn about that as well.

And on that note, just a brief foray into the “representation” space: Berry’s puzzle featured HARRIET TUBMAN in a key central spot, and also used Cardi B to clue RAPS and “Diary of a Mad Black Woman” to clue MADEA (which, although it has a Rotten Tomatoes score of 16%, was also the start of the cultural phenomenon that is the Tyler Perry film empire). That’s all great! So it was kind of a bummer to end (or nearly end) this puzzle on OGLED, a word I wish people would just delete from their wordlists (right along with LEER). Being OGLED is a truly degrading experience, and unless it’s happened to you, it probably seems like a bad but abstract thing. The concrete reality of being objectified while walking down the street is indescribably gross, and I don’t really want to be reminded of it while solving. Obviously, this doesn’t completely undermine all the good things this puzzle does, but I did want to make this point.

Overall, this was an enjoyable solve, one unpleasant entry notwithstanding! Tons of stars from me, and looking forward to more puzzles with an attention to representation from Patrick Berry in the future. 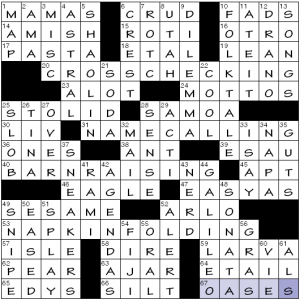 No revealer, just what’s advertised by the title. Each of the theme entries ends with a typical poker action.

I think these follow a sequential order. Not 100% on CHECKING. Consistency in all being gerunds is good. Solid if a bit stiff crossword and theme. 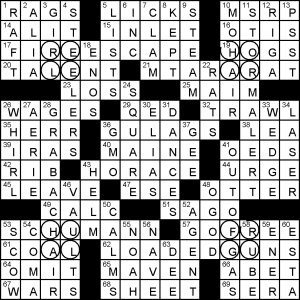 This kind of visual theme is encountered far more often in the NY Times. Our two constructors explore SQUARE/DANCES – four of them – in four corners of the puzzle – arranged in 2×2 squares. We get the REEL, HULA, HORA and the forgettable FRUG.

The puzzle played very easy, more like a Monday / Tuesday. This theme can play all kinds of hob on your fill, so our constructors went with a very divided grid, divided into five fairly self-contained areas. All of them have a lot of four letter answers, which made it easy to solve. It also meant the puzzle had decent quality control, though.