My times have been slower than usual all week, but figuring out what was going on with Nancy and Will’s grid today truly took me a minute: 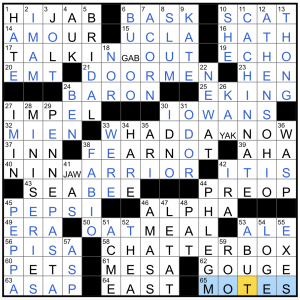 We’ve got three CHATTERBOXes in the grid, affecting both the acrosses above and their respective downs – BU[GAB]OO (6D, “Cause of dread”), KAYAK (26D, “White-water rental”), and [JAW]AS (41D, “Scavengers on Luke Skywalker’s home planet”).

Cute theme. CORNER THE MARKET (38a, [Monopolize, and a hint to four squares in this puzzle]) is the theme, and in each corner we find rebussed words that can precede “market.” 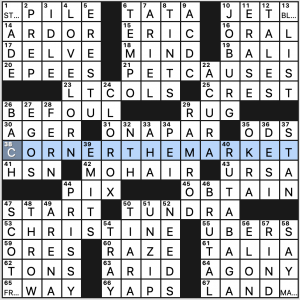 I’m not sure how I sensed this was going to be a rebus grid, but I guess something felt off in those corners as I was solving. The revealer just confirmed it with a perfect grid-spanning phrase.

I like the fill today with LOVELORN, RUTABAGA, celeb PET CAUSES, and Stephen King’s CHRISTINE. Also, JOBURG, PRISSY, MOHAIR, and BRUTAL, but not so much LTCOLS.

I must have heard [1974 Mocedades hit] ERES TU sometime in my life (see video below), but it just looks like longish crosswordese in the grid. 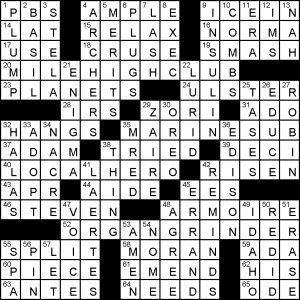 So although the clues suggest the theme is “sandwiches”, three quarters are long ones: grinder, hero & sub. Club is odd one out in that regard. Each of three definitely repurpose real-world phrases that have nothing to do with sandwiches: racy MILEHIGHCLUB, LOCALHERO and ORGANGRINDER. And then there is MARINESUB. I can find no real word with that meaning. Either I’m completely missing something OR this answer has been lifted carelessly from the 28 December 2010 Robert Doll NY Times and no-one from then on noticed, which seems… unfathomable?

Not really able to focus on the rest of the puzzle, but I do note a few unusually difficult words:
STELA an [Inscribed pillar] that you may have seen in archaeology stills without knowing its name.
Similarly the ZORI is that stereotypical thick sandal in traditional Japanese dress. I’d say considerably more Westerners can recognize it visually than name it!
I have no idea what a CRUSE is, but the clue says [Small earthen pot]. The dictionary says “archaic”, which is helpful…

I’ve been on a grilling kick lately, so this one’s up my alley!

THEME: The word GRILL is “mixed” (jumbled) in common phrases. 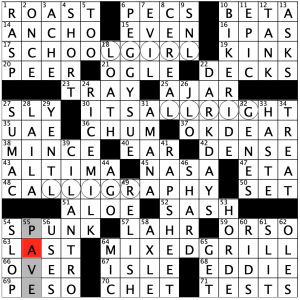 Let me get this out of the way first, since it’s a long-running complaint of mine: I don’t know why Universal runs (so, so many!) circle-dependent themes when they can’t offer circles to the masses. Universal grids that feature circles are available on this site, but nowhere else. When you’re asking solvers to count letters, circle them, and unscramble them, it’s a bit much, especially to the solver. So much more pleasant when circles are present. I’m told circles are coming soon… So… why not just hold off on the circle dependent themes until that’s straightened out?

Anyway, the puzzle itself was good! I especially enjoyed the fill and some of the clues. I really struggled with 55D [Cover, as a cloverleaf] PAVE. I had ?AVE and had to run the alphabet twice before I figured that out. What a great clue! (yeah… for some reason I couldn’t see SPUNK either). Finally nailed the answer for [Muhammad’s boxing daughter] LAILA since contributor pannonica from this site noted that her name uses only the letters found in ALI. 52A was another good one with [Garment around Steve Nash?] SASH. That’s cryptic since the word SASH is found “around” the name Steve Nash. I like the British cryptic style clues sneaking in American crosswords.

The clue for 71A [Teachers write them] TESTS could also be [Teachers search for hours on the internet for decent ones before giving up and writing them]. Just sayin’. 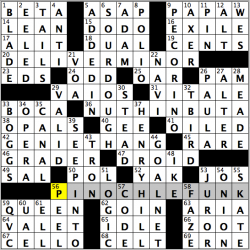 Good day, everybody! Hope you’re all doing well, and for those residing in parts of the Gulf Coast and the Southeast, hope you’re staying safe with Laura’s landfall.

Today’s puzzle involves music making the body move…well, actually, it’s parts of the body making the music move! Puns are created from musical phrases by creating an extra sound that doubles as a name of a part of the human body.

Of all things to think about after finishing the puzzle, the Murray’s Cheese food shop in Lower Manhattan popped into my head because it’s been forever since I’ve bought some PECORINO Romano cheese from there to go with the unsalted crackers that I buy with regularity (9D: [Cheese made from ewe’s milk]). That, plus the Drunken Goat cheese, where cheese is cured in Doble Pasta red wine, are my favorites! OK, time to stop thinking about food. Let’s think about ZOOT suits and my first memory of seeing that suit being the Tom and Jerry cartoon where Tom is dressed up in one (66A: [Kind of suit in the ’40s]). 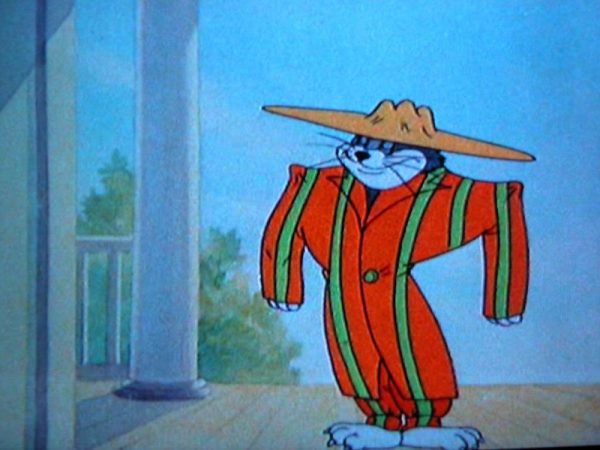 The long fill down the middle of the grid was a nice element to it, with some real appetizing entries like SOURDOUGH included (6D: [Bread popular in San Francisco]). Might need to see Goodfellas once more after seeing HENRY HILL (37D: [Ray Liotta’s “Goodfellas” role]). My past encounters with a PAPAW have left me thinking it is much more like a mango than a banana, but I definitely I can understand the custard-y resemblance as well (9A: [Banana-like fruit]). Won’t be making it down to the Southwest portion of the U.S. anytime soon given the pandemic, where I was introduced to the fruit. Maybe I’ll find some up north and try it before too long.

“Sports will make you smarter” moment of the day: BOGGS (33D: [His No. 26 was retired by the Red Sox]) – Former Major League Baseball third baseman Wade Boggs was known as one of the most superstitious men in sports, as one of his pre-game rituals being to eat fried chicken before every game. Boggs was also one of the game’s all-time great contact hitters, as he won five batting titles, including four consecutive occurrences between 1985 and 1988. After his time in Beantown, Boggs played for the hated New York Yankees, where he won his only World Series title in 1996. Boggs ended his career with the Tampa Bay Devil Rays, and it was while playing for the Devils Rays where he became the first player in MLB history to collect his 3,000th hit with a home run. Boggs was inducted into the Baseball Hall of Fame in 2005.