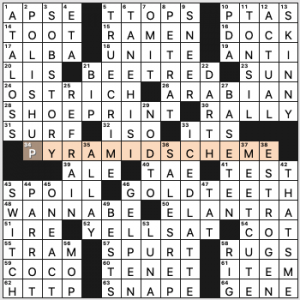 Ms. Hawkins has published her work in several other venues, both indie and newspaper/syndicated, prior to her NYT debut here. With longtime themeless constructors whose work you’ve tussled numerous times, it’s easier to know their vibe when it comes to fill and clues, but dang! I had to fight my way through this puzzle as if it were a Saturday rather than a Friday. Just me, or did it seem tough to you, too? I made misstep after misstep, like ADHERED before AT A LOSS, FOOTPRINT before SHOE PRINT, GYM RAT before PET RAT (and yes, I too would like to see the fitness center with exercise wheels for humans!). When most of what you’ve filled in is wrong, it is hard to progress.

Fave fill: PYRAMID SCHEME, POLISH UP, TRUE CRIME podcasts (never listened to one but I like reading about them; is that weird?), TA-NEHISI Coates (further slowed myself down by mistyping it as TANHEISI), ICED LATTE, and MEET CUTE.

I was primed to dislike the fill because 1a is APSE and that is a lifeless way to start a crossword. T-TOPS (meh) and plural abbrev PTAS rounding out the top row weren’t any better, but the puzzle improved below.

If you’re like me and you pretty much missed out on 1990s pop when it was happening, the Spice Girls’ “Wannabe” video will be new to you. If I had to see it, you have to see it. Don’t want to suffer alone.

3.5 stars from me. It’s always nice to see a woman’s name in a themeless byline after the dark years of “good lord, why so many men.”

Good morning! Happy Friday! It’s sunny and not particularly humid out on my porch, and I really enjoyed this puzzle. That’s a good start to the day.

I figured out the theme and thought it was cute, and then I found the revealer and it made me grin. Each theme entry is a body part, as the title suggests. 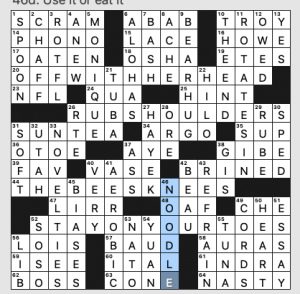 And the revealer that adds an extra layer of fun: 43d [Oft-repeated line in a song … such as the preschool anatomy lesson lyric hinted at in this puzzle’s theme]: REFRAIN. This brings back fond memories of my childhood and even fonder memories of my daughter when she was very small. Thanks for the nostalgia, Helen!

What I didn’t know before I did this puzzle: see above about the title of the Parker poem. I also did not know that INDRA Nooyi was CEO of Pepsico who appears on Fortune’s “Most Powerful Women” list. And I didn’t know (or had forgotten) that Dan Aykroyd’s character in the CONEheads skit and movie is Beldar. 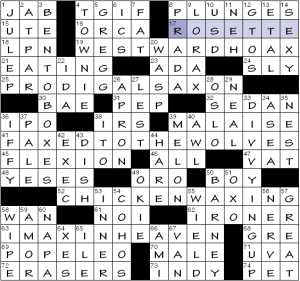 This is an off-size grid, 16×15 and it presents what seems like an unexplained theme. The bigram AX is added to established phrases, thus wackifying them. No revealer, no helpful title. 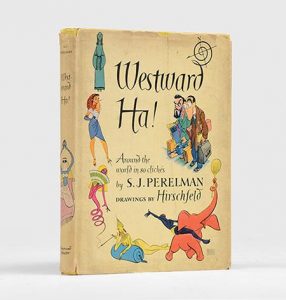 Let’s have a look at the rest of the fill.

Anyway, sorry if it seems as if I bear some sort of grudge against the theme. If someone can provide an adequate explanation or rationale I promise to bury the hatchet.

As I texted a friend about this puzzle right after solving, “this puzzle reminded me that I do still like crosswords.” Not that I ever really doubted it, but sometimes I do get down on solving (in a “have you lost interest in activities you used to enjoy because the world is terrible?” kind of way), and when I feel like that, it can be extra exhilarating to be lifted back up by a clean, crunchy, seamlessly executed beauty of a puzzle like this one. I loved every single long entry, and all of the medium-length ones, and the clues were sparkly, and it was so EASY that the feeling of absolutely crushing it released all the endorphins. So, thanks, Robyn Weintraub, for curing my most recent bout of Covid depression! 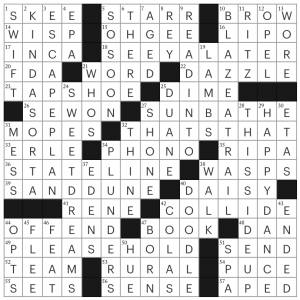 The delightful long entries included: KINDA SORTA / ESCAPE PLAN / THIS SIDE UP / HAPPY DANCE / SEEYA LATER / PLEASE HOLD / SWEET DREAMS / BLAZE A TRAIL. So good! All of it! My favorites are probably KINDA SORT and HAPPY DANCE, although the clue on SEEYA LATER [Phrase that can precede “alligator”] is so funny. The equally excellent medium-length entries were the colloquial SO SOON? (perfectly clued with [“Already?”]  / DAZZLE / DOODLE / PLUNDERS [Steals, pirate-style] (!!) / SUNBATHE. Just solid, fun entries and cluing across the board.

Ok, well, this puzzle kicks ass, I’m happy to have solved it, and it gets all of my stars. Have a good weekend, team!

Theme: Phrases whose first words are an action in American football. 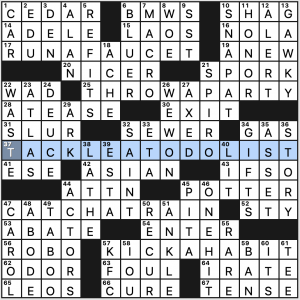 I guess what’s bugging me about this theme is that I want it to be a sequence of events, but it’s not. It’s just a listing of different actions in football. There’s nothing wrong with that; it just would flow better if it was an established sequence like THROW, CATCH, RUN, SCORE, or something similar.

Also, I’m a little surprised at the lack of sparkly fill in the grid. There are no non-theme entries longer than six letters and nothing more lively than POTTER and ONE-HIT. It certainly doesn’t feel fusty or overly laden with crosswordese (SST notwithstanding), but there’s nothing here to really sink one’s teeth into.

A pleasant theme for anyone missing football. Fill could’ve used some jazzing up. 3.3 stars.